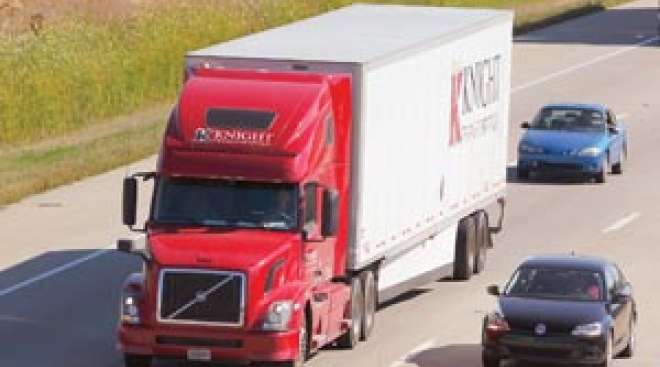 Estimates compiled by Bloomberg News and reviewed by Transport Topics point toward improved quarterly results for at least 25 of 27 freight companies when announcements begin this week.

“Underlying freight activity is still strong,” said Todd Fowler, a KeyBanc Capital Markets analyst. “The contractual pricing environment is very solid,” with rate increases in the 5% range for truckload and less-than-truckload fleets as shippers try to lock in capacity.

“In general, the first-quarter earnings will be relatively in line with consensus expectations for publicly traded carriers,” Fowler told Transport Topics. “They won’t be quite as strong as people were anticipating.”

In the truckload sector, improvement is forecast for at least 12 of 13 fleets on a per-share basis — including results that are expected to more than double at Swift Transportation Co., Celadon Group Inc. and Werner Enterprises Inc.

Also in the truckload sector, Knight Transportation Inc.’s profit growth should top 35%, analysts said. Covenant Transport Group Inc. pre-announced a first-quarter profit after a decade of losses in the period.

Universal Truckload Services Inc.’s earnings may not keep pace with last year. The company on April 1 said weakness in the steel and energy sectors would produce earnings between 26 cents and 29 cents on a per-share basis, compared with 27 cents in the 2014 period.

Recent reports from Bloomberg illustrated greater strength in pricing than in freight growth. Year-over-year February LTL growth was 2.9% in rates and 1.6% in tonnage, while truckload pricing climbed 3.2% and freight volumes inched up 0.6%.

In the logistics sector, all companies are expected to raise earnings, with the possible exception of intermodal-focused Hub Group Inc., where profit of 33 cents is expected to match last year.

Expectations have been tempered over the past several weeks by some signs of weakness in the industrial sector, though fundamental trends in that sector remain favorable, Fowler said.

Results also are expected to improve at UPS Inc. and Ryder System Inc.

“The real story in trucking this year is capacity,” American Trucking Associations Chief Economist Bob Costello said. “The tractor count in the truckload industry was only 0.2% higher in February than in December, and the counts are still falling on a year-over-year basis, including a 1.1% drop from February 2014.”

“Freight trends have been challenged by severe winter weather and U.S. West Coast port disruptions during the first quarter of 2015,” Benjamin Hartford, an analyst at Robert W. Baird & Co., said in a report. “Retail volumes have normalized in March, while industrial-related volumes remain pressured.”

“Economic momentum, we thought, was building in the final quarter going into this year,” ATA said in an April 2 statement. “Unfortunately, any momentum was lost early this year as most economic indicators showed softness in January and February.”

The April report on the U.S. job market fell short of prior months, and the Institute of Supply Management’s index of manufacturing activity fell to 51.5, just above a reading of 50, which signals economic expansion.

However, Costello urged a longer-term view.

“Both the weather and port situation are changing, and that will help all indicators this spring,” he said. “It is difficult to take a single month for any economic indicator and draw long-run conclusions. Overall, expect the economy to pick up steam as we enter the spring freight season and volumes to rise accordingly,” he said. “This robust growth will continue to keep pressure on industry capacity.”

Citing conversations with shippers, he wrote that “a recurring theme is the conversion of lanes from brokers to asset carriers” to secure capacity, improve service and attempt to control costs as freight rates continue to rise.

“A major private truckload carrier indicated that contractual rates are increasing 5%, which is consistent with our recent channel checks. We believe that low diesel prices are boosting truck attractiveness, while continued driver shortages are keeping capacity tight,” said an April 6 report from Jason Seidl of Cowen and Co., which didn’t identify the fleet.