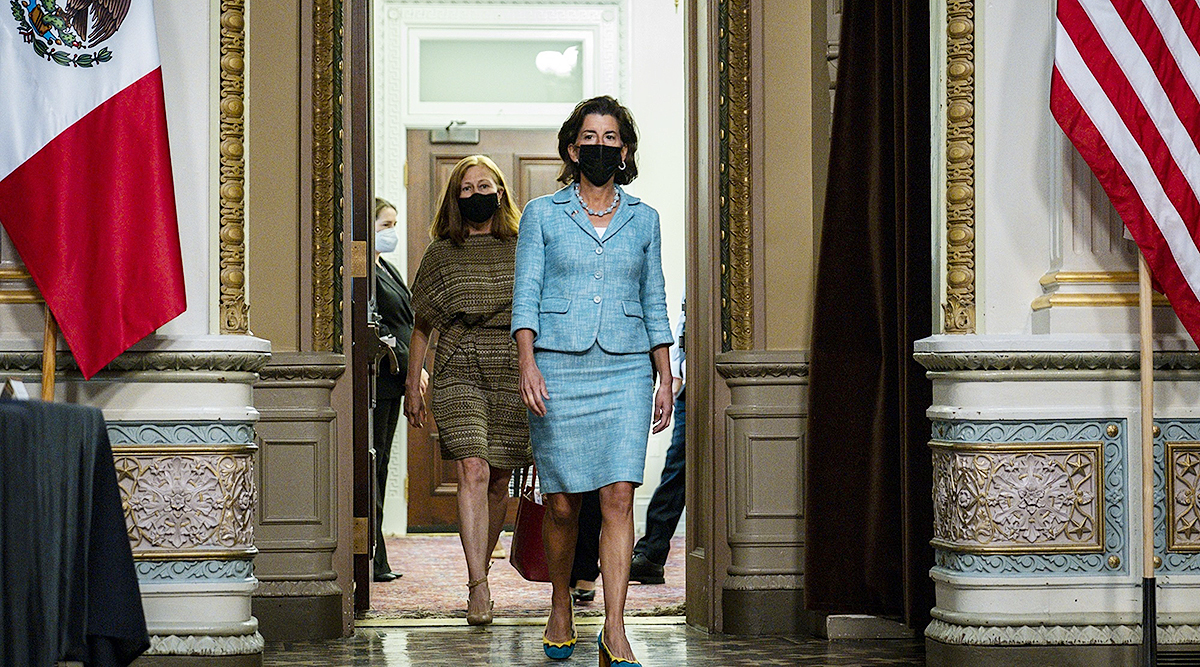 Raimondo says Commerce is focusing on diversifying supply chains and revitalizing manufacturing, with an emphasis on investing in local microchip output. (Pete Marovich/Sipa via Bloomberg News)

Commerce Secretary Gina Raimondo made a fresh pitch for President Joe Biden’s plan to raise corporate taxes, saying lower rates have failed to have much impact and that the chief executive officers she speaks to privately are “much more reasonable” on taxes than the trade groups who are aggressively lobbying against increases.

“I have not had a serious discussion where people say it’s a catastrophe if we have any increase in taxes,” Raimondo said of her conversations with CEOs. “There’s broad recognition that they will be just fine if the rate goes above 21%.”

Former President Donald Trump’s reduction in the top corporate-tax rate — to 21% from 35% — hasn’t meaningfully increased innovation and research and development spending by U.S. companies, Raimondo told reporters in a roundtable discussion ahead of a speech Sept. 28 in which she’ll lay out her agency’s priorities.

The House likely will vote on a bipartisan infrastructure bill with $550 billion in new expenditures on Sept. 30. Lawmakers also are wrangling over a larger tax and spending measure that carries much of the rest of Biden’s domestic plans, but likely will be less than the $3.5 trillion allowed in the budget resolution that Democrats are working with.

The White House is trying to unify members of the Democratic Party that are still haggling over the price tag and how to pay for the social-spending plan. Trade associations such as the U.S. Chamber of Commerce have fought proposed tax increases in the bill and are lobbying lawmakers against supporting it.

Raimondo said she has little sympathy for lawmakers who complain about the potential political backlash from their votes.

Raimondo was among Biden cabinet members tasked with negotiating the infrastructure package, which passed the Senate in August. Speaking at the Economic Club of Washington, where she delivered the first major outline of her agenda on U.S. competitiveness, she said she was optimistic that that bill will pass in the House this week. She also said that the president “is prepared to compromise” on the larger, up-to $3.5 trillion measure.

Her department is also focusing on diversifying supply chains and revitalizing manufacturing, with an emphasis on investing in local microchip output through the $52 billion CHIPS Act, according to a draft of her speech.

Commerce is also preparing to invest $10 billion in regional tech hubs across the country when the House passes its version of the U.S. Innovation and Competition Act, she said.

While international themes such as export promotion and trade negotiations are important, she doesn’t want that to be her legacy, Raimondo said.

On Sept. 29, Raimondo will co-host the inaugural meeting of the U.S.-EU Trade and Technology Council in Pittsburgh, a test of the Biden administration’s diplomacy efforts to work with allies against a joint competitor — China.

She said she hopes the two sides will “make some meaningful progress” on issues such as export controls — the policies aimed at cutting Beijing off from critical technologies.

“Unilateral export controls are not effective,” she said. “The right way to do this is get with our allies, narrow the list of items that we really do want to deny the Chinese of, and then hold hands with our allies so that we’re on the same page.”

Raimondo also plans to work hard to increase market access for American companies in China and once COVID-19 restrictions ease up, she’ll travel there with U.S. CEOs.

“There’s no point in talking about decoupling,” she said. “We have to figure out how to have serious, continuous commercial activity between our two countries that doesn’t undermine our national security.”

She spoke with her Chinese counterpart, Wang Wentao, in June and said she’s no less inclined to engage with Beijing now after various efforts at dialogue between the Biden administration and the Chinese have proven unsuccessful.

“If anything, I’m more inclined,” she said. “More dialogue is good.”