Powertrain Suppliers Focus on Fuel, Emissions in Dawn of Electrification 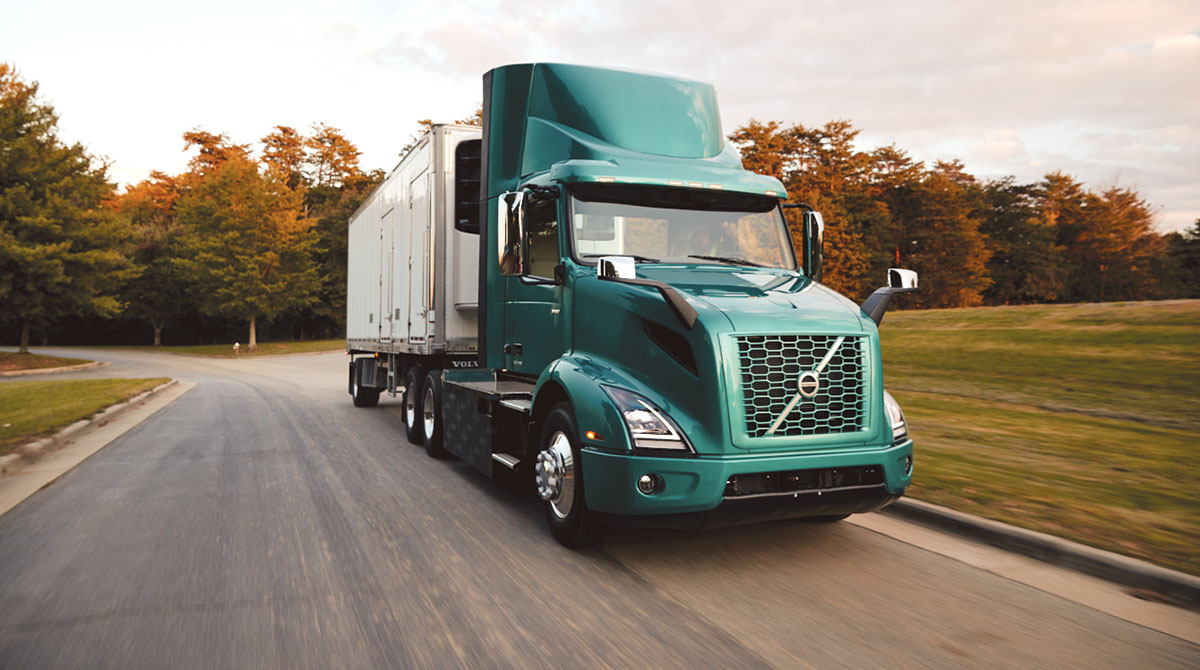 In a world where there is growing interest in electrification, drivetrain/powertrain makers are simultaneously pursuing two goals: developing products and technology when electric trucks reach critical mass; and supplying more low-emission and fuel-efficient products.

As EVs grow in favor, Branden Harbin, executive director of global marketing for Allison Transmission, noted there is still skepticism.

“Many OEMs and fleets are hesitant to adopt fully electric solutions at this stage due to limited driving range, lack of sufficient charging infrastructure, purchase price and relative immaturity of the technology, most notably the battery technology,” he said. 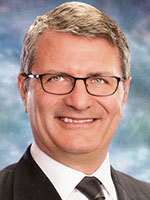 Expectations for “a full transition” from internal combustion engines to fully electric vehicles vary widely, Harbin said, adding, “We can all agree that commercial vehicle electrification is here, and it is not going away.”

Like Harbin, others are not ready to write the obituary of the internal combustion engine.

“Technologywise, it’s possible” to wring still more fuel economy and emissions reductions from diesel engines, said Mihai Dorobantu, director of technology planning and government affairs in Eaton’s Vehicle Group. He noted that doing so requires “bringing a more complex technology package to bear,” adding that with increased complexity there was a potential for increased cost, which would have to be justified by fuel savings.

Dorobantu said that the cost and weight of batteries make battery-powered trucks a hard sell. Fuel cells, an alternative to batteries for electrical drives, “are still very immature” in terms of their development, he said. “We still think that for the next 10, 15 years, diesel will be the dominant mode of transportation,” Dorobantu explained. 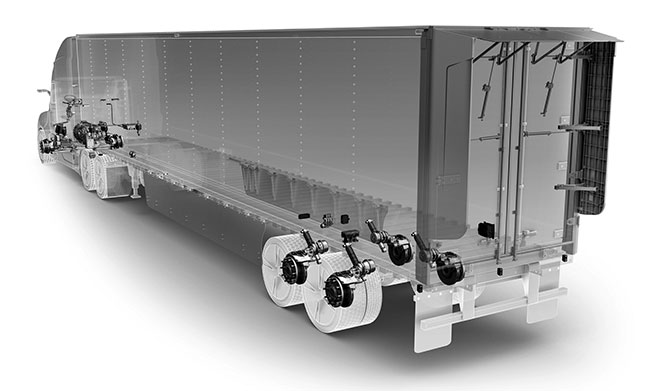 ZF Group’s Plenchette noted that electric solutions, such as an electric compressor, will help to increase the efficiency of the powertrain. (ZF)

Drivetrain and powertrain manufacturers have long been focused on how they can support fuel economy and emissions reductions pointing to products and systems they offer. Their work includes continuing to help truck OEMs improve fuel economy. Steve Slesinski, director of product planning for Dana’s commercial vehicle business, said that downspeeding — slowing the engine at highway cruise speed — provides fuel efficiency and results in less wear over the life of the engine because it reduces the number of piston cycles. “When you slow the engine down you still have to travel at highway speed, so you make up for that slower engine speed with a faster axle ratio,” he said.

Dana offers Spicer XFE 75W-85 synthetic gear lubricant, described as an “extra fuel-efficient lubricant” that can be spec’d for new vehicles. The lube can be purchased as an aftermarket product as well. “Fleets can swap out the fluid that’s in the axle today,” Slesinski suggested, for enhanced fuel efficiency. “Based on how far a fleet travels, it could be a payback of a month, certainly less than a year,” he said.

On the emissions-reduction front, suppliers described a range of efforts. Dana subjects its axles to a series of dynamometer cycles and provides the results to the truck OEMs. The truck makers incorporate that data into the calculations that they provide to the Environmental Protection Agency regarding greenhouse gas emissions of the vehicles.

Richard Conklin, director of air treatment and engine air management for Bendix, pointed out that the new GHG standards “look at the fuel consumed and the greenhouse gases emitted of the total vehicle” instead of “really just an engine test.” He said, “The OEMs do bring us in earlier because the entire truck is under inspection now.” 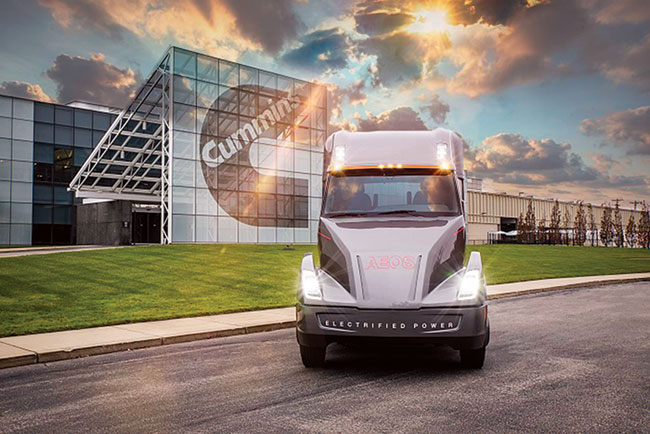 Cummins is aiming to reach net-zero greenhouse gas emissions by 2050. “We’re doing this by helping our customers adopt cleaner technologies today, like near-zero natural gas and advanced diesel, while infrastructure is being put in place for zero-emissions technologies,” said Katie Zarich, director of on-highway communications.

Suppliers are looking to a future with more electric trucks. Some have leaned into that future. Dana provides components and systems that qualify for government incentives, in the form of credits, for fleets that purchase electric vehicles. Slesinski estimated that more than 25,000 vehicles with Dana’s electric propulsion systems are in use around the world. “The biggest cost to these electric vehicles — maybe the biggest barriers, frankly — [is] the size of the batteries,” he said.

While truck OEMs are focused on electric, their top priority is uptime or total cost of ownership, according to drivetrain/powertrain suppliers.

“What we hear from our customers, our truck OEMs, is first and foremost it needs to still be reliable to provide uptime to their fleet customers,” Slesinski said. “And then secondarily they’re really interested in moving toward electrification.” 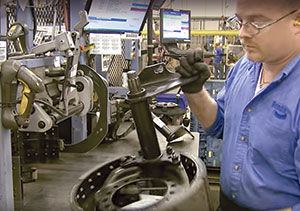 A worker at the Bendix manufacturing facility. (Bendix Videos via YouTube)

A “lever to pull,” Dorobantu explained, is to capitalize on investments that are being made in medium-duty trucks and medium-duty electrical drivetrains and pair these with diesels such that you can build heavy-duty hybrids. Compared to an electric vehicle that has “8 tons of batteries, the hybrid is a much cheaper option — a much more affordable option,” he said.

Bendix is working in conjunction with truck OEMs to create efficient electric subsystems for electric trucks.

“We still have to pump air for most of these heavy trucks that are running on batteries or fuel cells or any of those types of combinations,” Conklin noted. Bendix is launching a series of electric compressors, since the e-trucks — like diesel — still need compressed air. Conklin said the brake systems on electric trucks will remain familiar to those that have to run them and service them.

Julien Plenchette, senior vice president for ZF Group, noted that compressors are “a drag” on the energy spent on the engine. ZF’s clutch compressors allow disconnection from the engine when the compressor is not needed. ZF is working on a series of electric compressors.

“An electric compressor is a technology that of course will be necessary when we get to electric vehicles,” Plenchette said, “but meanwhile can be used to increase the efficiency of the powertrain in general.”

Allison’s Harbin said the supplier’s view is that “broad EV adoption in most end markets, applications and regions will take place over an extended period of time. Most drivetrain/powertrain suppliers believe that in order to manage the energy transition from diesel to electric, industry and government leaders must be on the same accord.

“Actions like using low-carbon fuels and working to modernize the grid and decarbonize it using renewable energy, as well as developing the hydrogen economy, should be taken now to help reduce environmental impacts,” Cummins’ Zarich said.

Cummins’ plan is to offer a range of technologies, Zarich said — products including advanced diesel, hydrogen ICE, natural gas, fuel cell and battery-electric. Zarich said the manufacturer is focused on “improving the efficiency of converting energy to power” in all of those products.

“Decarbonization is not a one-size-fits-all scenario,” she said. “Different customers, businesses and industries will require different solutions — there isn’t a single technology path.”