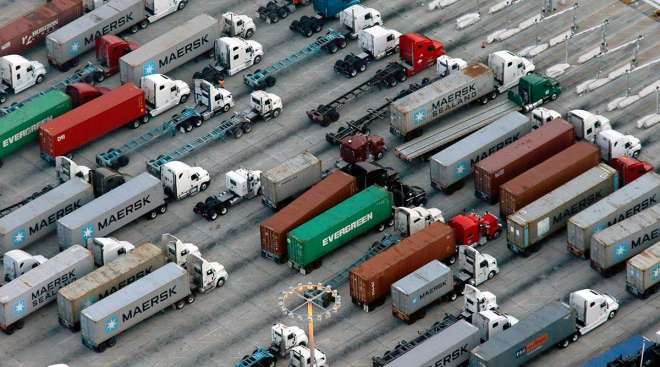 While consumers can shop online and track packages from the minute they leave the distribution center to their front door, some of the country’s biggest importers can’t get the same precise information about their own imports.

That’s because of an antiquated tracking system at the nation’s busiest seaports of Los Angeles and Long Beach – which handles nearly 40% of all imported goods to the United States.

The Port of Los Angeles has introduced what it hopes will be a $1.3 million fix. The pilot project with GE Transportation will deliver cargo information to retailers and truckers weeks in advance, giving them more time to plan.

Gene Seroka, the port’s executive director, said Nov. 17 the move will give it a competitive edge.

“Big data and digitization can transform our industry,” he told dozens of industry players during a boat tour of APM Terminals, Pier 400, where the two- to three-month program will unfold next year.

If successful, it should prevent congestion, allow dockworkers to staff better and even cut down costs for the millions of products that come through the ports, from shoes to furniture, experts say.

“Today the port typically receives [cargo] details only 48 to 72 hours before the vessel arrives,” said Jamie Miller, president and CEO of GE Transportation.

Now, railcars can be positioned weeks in advance, and truckers will know exactly where and when their cargo will be on dock, she said.

The shipping and customs data will be released through a site that retailers and truckers can access through their iPads or computer, Miller said.

“This is music to our ears,” said Weston LaBar, executive director of the Harbor Trucking Association. “We want a line of sight on cargo.”

Congestion has been a perennial problem at the ports.

Commerce Secretary Penny Pritzker said in October that the ports needed to up their game to be competitive globally. In a statement, she praised Los Angeles’ efforts.

But there could be hurdles. The pilot program will test the theory that giving retailers, truckers and railroad companies more lead time will make the whole system more efficient.