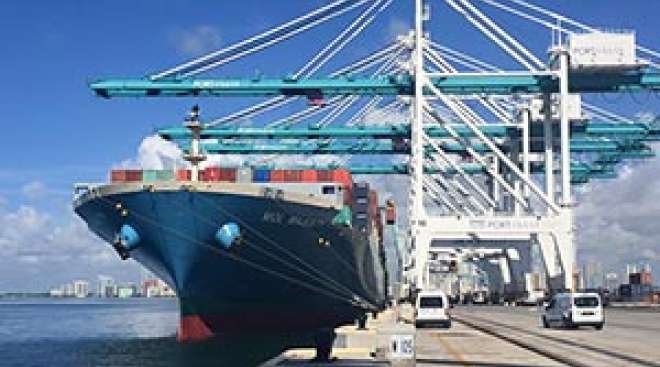 PortMiami officially joined the Neopanamax era July 9, when the MOL Majesty — a vessel too big to fit through the original Panama Canal — became the first ship to arrive at the port after transiting the newly expanded canal.

To a soundtrack of Kool & The Gang’s "Celebration" and a water cannon salute, the arrival of the Majesty was as much a celebration of Miami’s $1.3 billion in port improvements to accommodate bigger ships as it was a culmination of Panama’s nine-year locks project.

“It’s a 'wow' day for Miami,” PortMiami Director Juan Kuryla said as Neopanamax cranes plucking cargo from the Majesty loomed in the background. The Majesty, which transited the canal from the Pacific Ocean to the Atlantic on July 4, is part of the fleet of Mitsui O.S.K. Lines, a Japanese company.

“That we have the mayor [Carlos Gimenez], the Panama Canal administrator, the chairman of the Federal Maritime Commission, the president of Florida East Coast Railway and so many shipping line executives here speaks to the importance of the day and the importance of having 50-feet-deep water,” Kuryla said.

Before it dredged its shipping channel to a depth of 50 to 52 feet, the port was too shallow to handle the Neopanamax vessels that are expected to transit Panama’s new locks with regularity. Since the June 26 opening of the expansion, there have been 18 transits.

A port access tunnel directly linking the port to the interstate highway system and a rail bridge and on-port track that connects PortMiami to the Florida East Coast rail yard also are part of the improvements the port made to be big-ship ready.

Gimenez acknowledged that both the tunnel and channel dredging had been controversial. But, he said, “We wouldn’t have been able to accept this ship without the dredge.” And the tunnel, he said, keeps 14,000 vehicles daily off the streets of Miami and provides a vital link to the interstate highway system.

“This has been a very, very good week for the port,” the mayor said. A newly approved $200 million cruise terminal, the canal expansion and the arrival of big ships should add up to thousands of new jobs for Miami-Dade County, he said.

“The megaship era is here, and yes, PortMiami is prepared and ready,” said Commissioner José “Pepe” Díaz, who presented a ceremonial plaque to Yutaka Uno, captain of MOL Majesty.

For Panama, locks that can handle longer, wider and heavier ships had become a competitive necessity. The chambers of the new locks are 1,400 feet long, 180 feet wide and 60 feet deep. The original 102-year-old locks are just 965 feet long and 110 feet wide with a depth of 42 feet.

The 991-foot MOL Majesty, which has a capacity of 6,724 TEUs (the equivalent of a standard 20-foot container) , arrived in PortMiami just before dawn and already was offloading cargo by the time 11 a.m. festivities began at the port. The event ended with a barbecue under an old cargo crane.

“This is a small vessel compared to what we will see in the future,” Quijano said. The original canal can  handle only 5,000-TEU ships, while the new locks can accommodate ships carrying up to 14,000 TEUs.

Water cannons saluted MOL Majesty as PortMiami and the Panama Canal Authority renewed a cooperation memorandum that allows them to share information and make joint marketing trips on behalf of the port and canal.

The first containership to pass through the new locks was another Mitsui vessel, the 1,105-foot MOL Benefactor, which transited the locks July 1, but it still is en route to New York, so Miami got the honors as the first U.S. port to receive a Neopanamax ship.

The MOL Majesty, which began its trip in Asia, also will call on Jacksonville, Florida; Savannah, Georgia; Charleston, South Carolina; and Norfolk, Virginia, before heading to the West Coast and ultimately returning to Japan. Not all its U.S. ports of call have deep water, but because the ship won’t be fully laden, they can handle it.