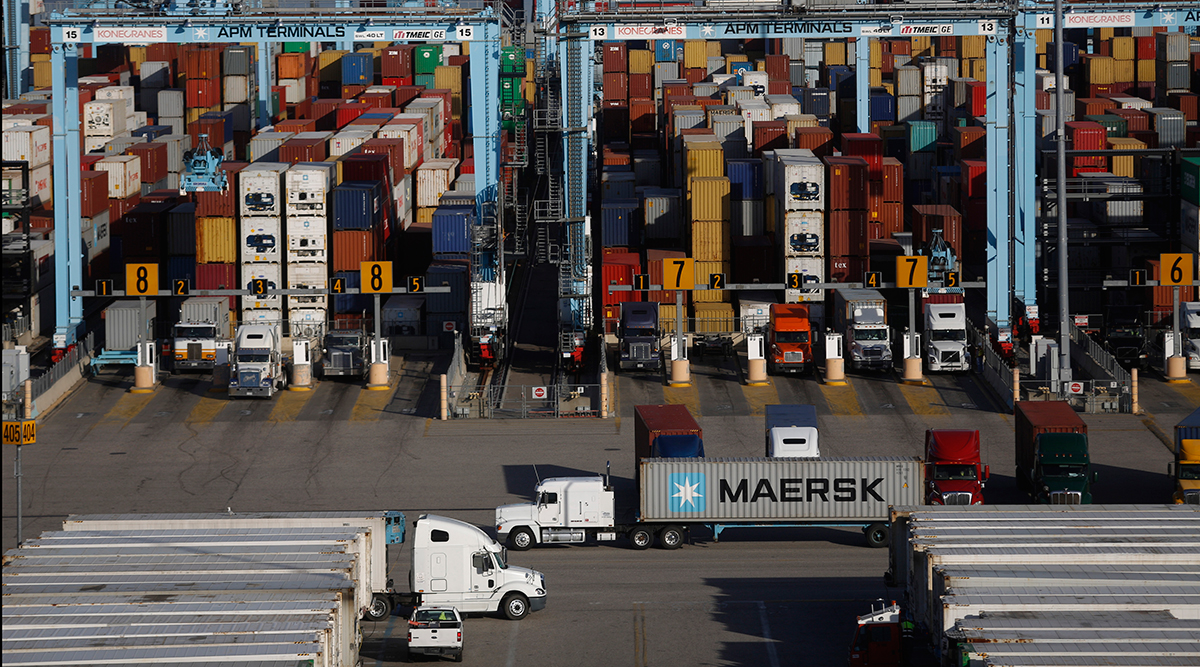 The Port of Virginia began phasing in a new appointment system for truckers calling on its biggest facility – Norfolk International Terminals – part of an effort to cut congestion as cargo volumes continue to grow.

It’s a pretty big deal because trucks move the majority of the cargo that travels through the port – 60% in 2016.

Container volumes are growing, too. The port last year broke yet another record for container volume – for the sixth year in a row.

The new system, which requires an appointment for any trucker calling at NIT on weekdays between 5 a.m. and 7 a.m., is the culmination of a process that began about four years ago; at one point it was set to start in June 2014.

RELATED: For first half of 2018, Port of Virginia volume growth projected to be strong

“We reached a historic milestone at NIT this morning,” Greg Edwards, director of internal and partner communications, wrote in an email to members of the port’s trucking community on March 1, the day the system debuted.

“Over the last several years, many of you devoted your time and talent to help us ensure that today’s launch would be a success for the port, and all of our customers, partners and stakeholders. Please accept our thanks.”

The system requires that truckers wishing to call at NIT first thing in the morning go to a port website and “follow the steps.”

As the system unfolds, the window for required appointments will expand. It’s expected to begin at the port’s second-largest terminal, Virginia International Gateway in Portsmouth, this summer.

So how’d the first day at NIT go? From the port’s perspective, pretty well. It cited metrics showing that the time it took for trucks to enter and leave the terminal within that 5 to 7 a.m. window ranged from roughly 20 to 22 minutes.

RELATED: Port of Virginia gets preliminary OK on dredging project

Truckers and those who represent them, however, were less enthusiastic.

“The trucking community has a lot of concerns,” said Marilynn Ryan, president of the Tidewater Motor Truck Association, whose members oversee hundreds of trucks that together move a couple thousand boxes to and from port terminals daily. “We asked a lot of questions we never got answers to.”

The biggest question the port’s truck community had was how many trucks the new system would be able to handle per hour, Ryan said.

The second was whether there would be issues getting appointments.

“We were assured there would be plenty of appointments to go around,” Ryan added.

Truckers, however, found that in trying to make appointments, the port ran out pretty quickly, she said, adding, “No one has actually told us how many appointments they accepted; they’re not being transparent with those figures.”

Because of electronic monitoring devices that truckers are now required to use, the time it takes to enter and leave NIT or any other terminal at the port can be determined with some certainty.

Ryan disputed the port’s claim that truckers calling at NIT early March 1 were able to get in and out of the terminal in 22 minutes or less. It was more like an hour to an hour and a half, she said.

Portwide, including the facilities at Virginia International Gateway, Portsmouth Marine Terminal and the Pinners Point Container Yard, congestion that morning was so severe that “turn times” – the time it takes for a truck to enter and leave a terminal – ranged from two to seven hours, Ryan noted.

George Berry, a local trucker and director of For Truckers By Truckers, an advocacy group, said there were no backups early March 1 at NIT and that the rollout of the new system was well organized.

“I think everybody is cautiously optimistic at this moment,” he said, though he also questioned the port’s claim of 20- to 22-minute turn times on the first day of the program.

Roman Hartmann, a trucker who has hauled containers at the port since 1976, said the new system creates problems for him because his is often among the first trucks waiting when NIT opens.

He can only make an appointment through his company’s dispatcher, who is not available when he picks up a container load in Richmond, usually at about 2:30 in the morning.

“There needs to be a non-appointment gate for people like me,” Hartmann said. “The appointment system works good, but not for everybody.”

Charles Glover is vice president of Suffolk-based GTL Transport, which manages about 60 truckers who call on the port.

“It definitely is too soon to tell how it is going to affect the most significant issue facing motor carriers in this region, which is port congestion,” he said.

The new system is one piece of a multi-faceted approach to deal with the issue, though it’s a major component, he added.

Glover, however, also questioned the roughly 22-minute average turn time the port claimed for the program’s first day. His company’s truckers, citing data from devices they have to carry, said the time to enter and leave NIT early that morning was about three times that long.

“Ours were all an hour plus,” Glover said.

Jay Stecher, a port spokesman, said late March 2 in an email he’d rather wait to comment on the situation.

“I’d prefer to speak next week after we’ve had the reservation system up and running for a week and can provide a more comprehensive look at our performance,” he wrote. “Day one was a positive start.”

The high winds that moved through the region on March 2 forced the port to stop operations from time to time for safety’s sake, he added.