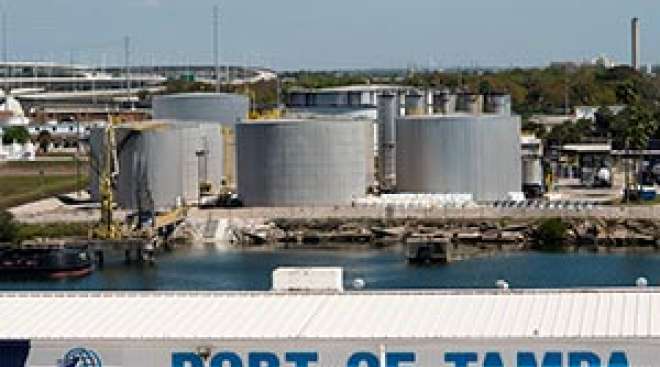 Keying on the theme "New Frontiers" during his annual State of the Port address, Anderson said 2016 will be a "milestone year" at the port for handling containerized cargo. Though most widely known as a cruise embarkation point, Port Tampa Bay has refocused its commitment to cargo trade over the past year, Anderson said, making it the state's largest port for cargo handling.

With about 5,000 acres in land holdings, the port will expand its ability, Anderson said, to accommodate imports and exports including food stuffs, automobiles and dry bulk products.

"We have some of the most available land to grow this port of any port in the nation," he said,.

Speaking to about 340 port tenants and customers, politicians and others, Anderson said 3.2% growth in its cargo business in 2015 confirmed that bringing more cargo to its berths is a major component of the port's future and an area that requires investment. That investment starts in March when Port Tampa Bay takes delivery of two massive cranes that will allow it to service containerships carrying up to 9,000 industry-standard, 20-foot containers. Those ships are about twice the size of the largest that currently dock at the port.

"Capability like that gets the attention of potential shipping customers around the world," Anderson said.

Anderson's remarks come as competition for cargo has grown among southwest Florida ports. Port Tampa Bay's southern neighbor, Port Manatee, also scored business success in 2015, adding to the volume of petroleum and dry bulk products it ships and receives. The ports could see more common business in the coming year as Port Tampa Bay builds the first refrigerated warehouse it has had on its docks in years.

Port Manatee has long been a leader in the cold-storage sector, boasting multiple refrigeration facilities used by fresh produce companies. It is one of the top five cold storage port facilities on the East Coast, with 207,000 square feet of refrigerated storage. The port and private industry partner Logistec also have agreed to build an additional 148,000-square-foot refrigerated warehouse, which is slated to open in 2017.

However, officials at both ports spent much of 2015 downplaying a competitive relationship. Port Tampa Bay officials said that they don't intend to go after Port Manatee's fruit business, while members of the Manatee County Port Authority directed staff to find market areas where the two ports can collaborate on marketing.

After his presentation, Anderson said the expansion of the Panama Canal and the promise of future business with Cuba are two components that will provide more than enough business for neighboring ports.

"In Tampa Bay because we have two ports in the same bay, there's plenty of room for the growth for both," he said.

By the numbers, Port Tampa Bay had an up year for its cargo volume. Overall cargo volume hit 37 million tons, Anderson said. The total ranked as the highest for cargo at any Florida port. Jumps in bulk cargo and liquid bulk accounted for much of that increase.

One statistic that dropped off in 2015 was cruise terminal volume. That was down 2% to 867,114 passengers

The Jan. 20 event drew a guest list that included Manuel Benitez, the deputy administrator of the Panama Canal Authority. Benitez said Port Tampa is making the right moves by building its capacity to match that of the expanded canal, which is expected to be fully operational by summer.

"So I think it's a smart move to go for more with these investments," he said.

A moderated panel that included Benitez and Anderson also addressed potential future trade with Cuba. Anderson said the port has developed "in-depth plans" to grow and accommodate trade with the communist island nation.