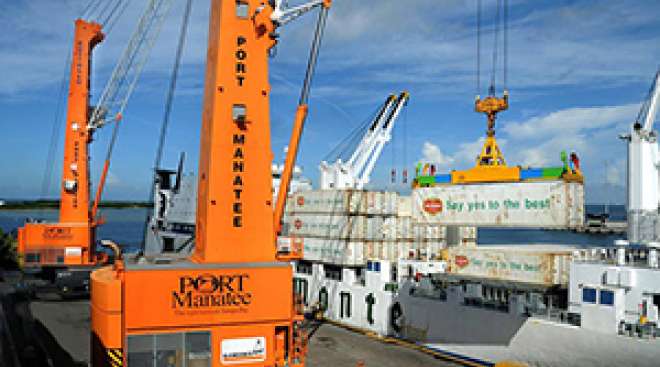 When the Panama Canal reopens its wider, deeper locks and channel on June 26, Port Manatee officials will be looking to turn that greater capacity into more cargo traffic.

The port will have its senior director of trade development in Panama for the ceremony, which opens a $5.2 billion project that finished more than a year behind schedule. At the same time, officials back at the port’s executive offices will be planning for more cargo coming their way.

The formula for bringing more business to Port Manatee from the enlarged canal is more complicated than welcoming bigger cargo ships. The most regular cargo vessels to visit the port are significantly smaller than the 1,200-foot-long super freighters the revamped canal will accommodate. Those ships are too big and draft too deep to fit into the port’s maximum berthing depth of 43 feet.

Selling points have everything to do with accommodating anything a shipper can bring. Unlike some busy ports like Port Miami, Port Manatee almost always has open berth space to accommodate more berth traffic. The 1,100-acre port property has acres of dock and pad space for storing cargo. And, with its own railroad line and close access to Interstate 275, it can quickly move those containers to end users.

Dave Sanford, the port’s deputy executive director, said the port’s strategy is to attract a mix of big ships that have previously offloaded some cargo or fuel weight and smaller vessels loaded with cargo from the big, trans-Pacific freighters.

“We are ready for larger ships and more containers,” Sanford said.

Some of the big beneficiaries of increased cargo traffic will be the stevedoring companies operating at Port Manatee. Stevedoring companies such as Logistec, Federal Marine Terminals and Kinder Morgan Bulk Terminals may soon see more work at the docks. Carlos Buqueras, the port’s executive director, said more work will mean more jobs. With the berths, land, cargo cranes and warehouse and refrigerated space it currently operates, it can double its container volume.

Top prospects include additional business that “cascades” from the Panamax ships when they offload cargo at major international ports in the Caribbean to smaller, regional vessels bound for the United States. Vannelli said Logistec is also seeking to attract a container carrier to base some or all of its operations out of Port Manatee.

“The expectation is that we will land another container carrier in the upcoming years,” he said.

Logistec’s existing business at the port already requires a lot of labor. As things are, the company might put 100 or more personnel on a freighter unloading at Port Manatee.

If the port needs more than just labor, Buqueras said it is prepared to expand. With the right commitments from customers and shippers, he said the port can add to more than 200,000 existing square feet of cold storage warehouses, buy more cranes and build more cargo pads.

But none of that will happen until cargo traffic from the Panama Canal and anywhere else starts coming to the port.

“What we don’t like to do is build it then they come,” he said. “We want to come to a deal before we expand the facilities.”

The port is not pinning all its growth hopes on the Panama Canal. Buqueras said it is pursuing new business in Europe and Central and South America. Other new business could come from Cuba when and if the United States ends its half-century trade embargo with the Communist island nation.