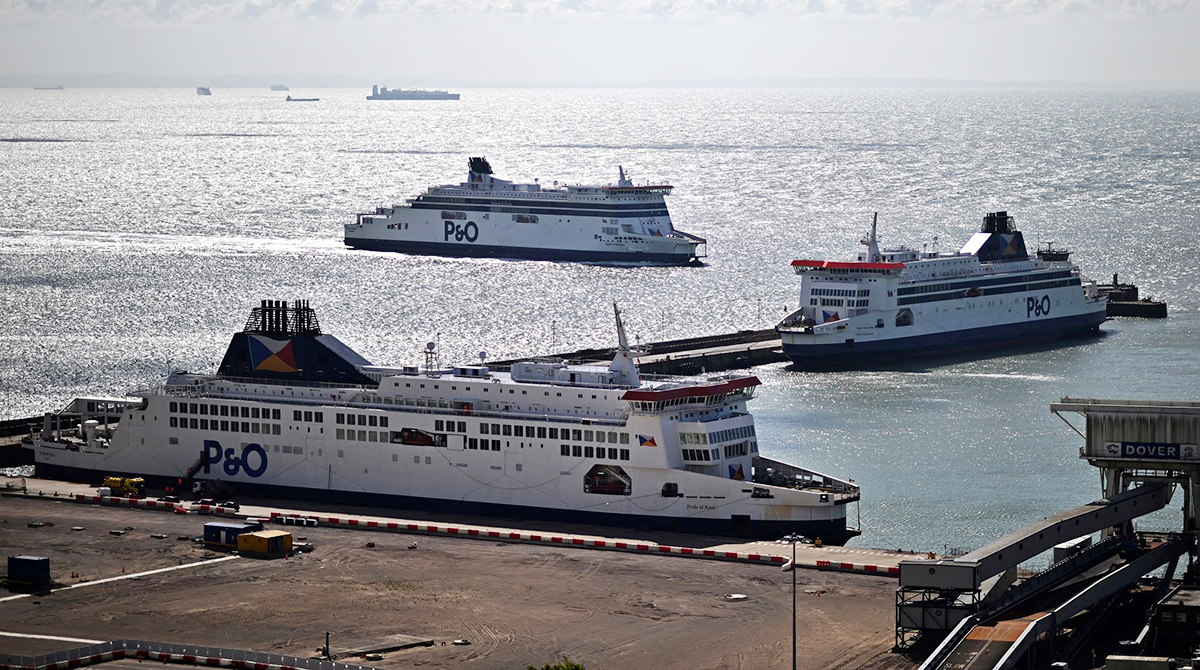 The P&O ferry 'Spirit of Britain' passes the 'Pride of Canterbury' as it sails back into the Port of Dover after undergoing sea trials. (Ben Stansall/Getty Images)

P&O Ferries Ltd. resumed freight-only services on the critical English Channel crossing between Dover and Calais after a six-week hiatus as it tries to move on from outrage caused by the abrupt firing of nearly 800 staff.

The Spirit of Britain arrived in the French port from Dover early April 27 loaded with trucks, a spokesman said. The restart on the so-called short straits route came hours after another P&O vessel ran into trouble in the Irish Sea.

P&O has struggled to return its fleet to service after temporarily halting U.K. voyages in mid-March to fire seafaring crew and replace them with lower-paid workers. The Spirit of Britain was cleared by the Maritime and Coastguard Agency to enter traffic last week, having been detained for failing inspections.

The agency said April 27 that it was carrying out a “full inspection” of the European Causeway after that ship lost power April 26 while making the 30-mile crossing from Cairnryan, Scotland, to Larne in Northern Ireland. It got underway using its own propulsion with tug boats on standby.

P&O, a unit of Dubai, United Arab Emirates-based DP World, said the vessel had suffered a “temporary mechanical issue,” and the MCA said it had not been formally detained but would need to clear checks before re-entering service.

The ferry operator continues to face scrutiny and criticism over its dismissal of so many workers almost overnight in a move P&O maintained was necessary to slash costs and save the company.

Transport Secretary Grant Shapps told a parliamentary committee April 27 that he had instructed MCA to go over P&O’s operations “with a fine tooth comb,” and that they had been found wanting in a variety of areas, largely due to having new staff that didn’t know the ships.

When asked how P&O was being punished for the firings, which the company’s CEO has admitted broke the law, Shapps said: “The biggest penalty of all is the fact they’re not able to sail and therefore not able to make money.”

P&O said on Twitter that passenger services between Dover and Calais will restart in early May.