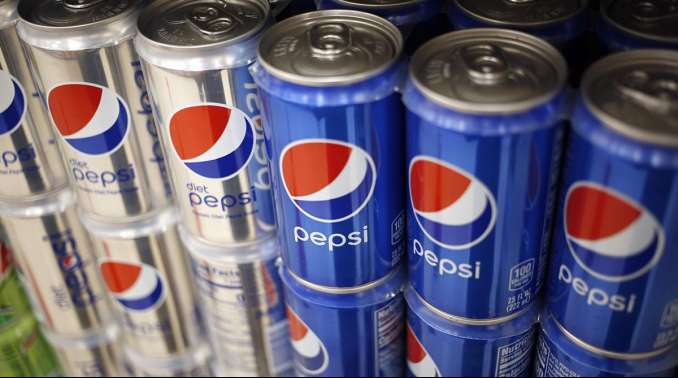 Cans of Pepsi and Diet Pepsi are seen on a grocery store shelf in Louisville, Ky. (Luke Sharrett/Bloomberg News)

PepsiCo Inc. is winning the inflation battle so far, successfully passing on surging commodity costs by persuading consumers to pay more for their soda and chips.

Higher prices for raw commodities like sugar and increased wages for labor led the snack and drink giant to charge customers about 12% more on average in the second quarter, the company said July 12. And though inflation-wary consumers only slightly increased the amount of PepsiCo food and beverages that they purchased, the higher prices enabled the company to increase its profit outlook, saying it expects revenue to grow 10% this year.

The new guidance reflects “the strength and resilience of our categories and consumer demand trends,” PepsiCo said in a statement. As it’s one of the first major industry competitors to report second-quarter data, investors are closely watching PepsiCo for insights into how shoppers are behaving as persistent inflation stretches their ability to absorb price increases.

PepsiCo reported sales of $20.2 billion in the quarter — just above analysts’ average estimate of $19.55 billion. Profit excluding some items was $1.86 a share, above the $1.74 estimate.

Traders weren’t overly impressed with PepsiCo’s performance, with its shares edging up 0.2% to $170.75 in New York trading at midday. The stock is down less than 2% this year, outpacing the 19% decline of the S&P 500 Index.

The maker of Mountain Dew, Fritos and Quaker Oats had previously increased its revenue forecast in April, nudging it up to 8% from 6%. Profit and sales in the second quarter beat estimates, the company said.

That higher revenue came despite muted and mixed sales of chips and soda, an indication of the Purchase, N.Y.-based company’s ability to pass its higher costs on to customers. Frito-Lay North America’s volume was down 2%, in part due to a temporary production glitch with the company’s hummus brand, Sabra. Quaker Foods North America was up 2%, and PepsiCo Beverages North America slipped 1%.

“Inflation was higher than 12% over the quarter, so we did need to fix some pricing,” Chief Financial Officer Hugh Johnston said in an interview. Pricing did affect volumes, he said, “but the volumes have held up well.” Johnston said that the company planned to increase productivity and cut its own costs through measures such as lower-priced packaging, but he said higher consumer prices are still likely this year.

The North American food and beverage business remained strong during the quarter, while demand for convenient foods helped international markets continue to perform “despite ongoing macroeconomic and geopolitical volatility and higher levels of inflation,” Laguarta said in the company’s statement.