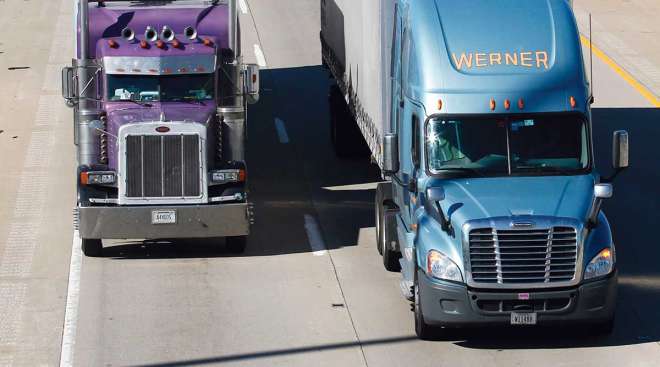 The need for a pavement study and intersection analysis kept a proposed trucking facility in Palmer Township, Pa., from gaining planning board approval.

The Palmer Township Planning Commission for the second time this year tabled a vote on a trucking facility slated for Tatamy Road near the Route 33 interchange. The facility would be used by Omaha, Neb.-based Werner Enterprises to train drivers and provide routine maintenance on trucks.

Werner ranks No. 15 on the Transport Topics Top 100 list of the largest U.S. and Canadian for-hire carriers.

The proposal has caused concern among some township and Tatamy residents who worry the project would bring more truck traffic and noise.

The township's assistant engineer said Werner's conditional use application, which is required for a trucking terminal, lacked a requisite pavement study. Werner also provided the township with four hours of traffic data about the intersection at Tatamy Road and Newlins Mill Road, but the township wanted eight hours, to be used to determine if the intersection would need a traffic light.

Werner officials asked the board for conditional approval, which would allow the application to continue to the township Board of Supervisors contingent on getting the requested information to the township.

Werner attorney Joseph Fitzpatrick reminded the board that the plans for the facility have changed in the months since they were first proposed to account for concerns expressed by officials and residents.

"The applicant and traffic engineer have gone far beyond what the ordinance requires for conditional use," he said. "We think we have gone far enough at this point."

Werner also will have to go before the boards with land development plans, which haven't been discussed.

Werner Vice President Randy Kraft said the meeting went about as expected after he learned the township wanted more data.

Werner's plans for the approximately 50-acre property at 1470 Tatamy Road include a 67,000 square-foot, two-story building where it would train company drivers with commercial licenses and do routine maintenance on vehicles. Drivers could shower in the facility but would have to sleep in their trucks, not in the building. There also would be enough parking for about 200 trucks and employees' cars.

Werner expects 35 trucks in and out of the facility each day — the same amount of traffic the company's Upper Macungie Township facility generates — but said that number could grow over several years.

The planning commission held a hearing on the proposal in February but decided to table its vote because it wanted to have a traffic study in hand, as opposed to a traffic study summary provided by Werner.

Kraft said the facility would have minimal traffic impact, noting its proximity to the Route 33 interchange, an area that's become a warehouse hot spot.

Werner's Palmer Township plans have changed since they were first presented to the planning commission in November 2015. The company initially planned a three-story building, driving school for inexperienced drivers and an exit on Tatamy Road.

Werner officials have since adjusted their plans and decided the facility would serve only as a training ground for drivers who already have commercial licenses, a change that cut back on traffic and allowed the building to lose a floor. The company also acquired additional land so the entrance and exit would be on Newlins Mill Road.

Resident John Voloshin spoke in opposition to the facility and all the new warehouses in the area generally.

He warned the Werner facility would become a "trailer graveyard" and said he's worried about safety with all the trucks on area roads.

"You're going to have accidents through the roof," he said. "Safety is an issue here and nobody's addressing that."

John Halligan, another resident, said he doesn't think a trucking facility belongs at the Tatamy Road location, but should go somewhere closer to the interchange.

"I don't think this thing should be approved until somebody does a detailed study on what Newlins Mill Road is going to look like when this is done," he said.