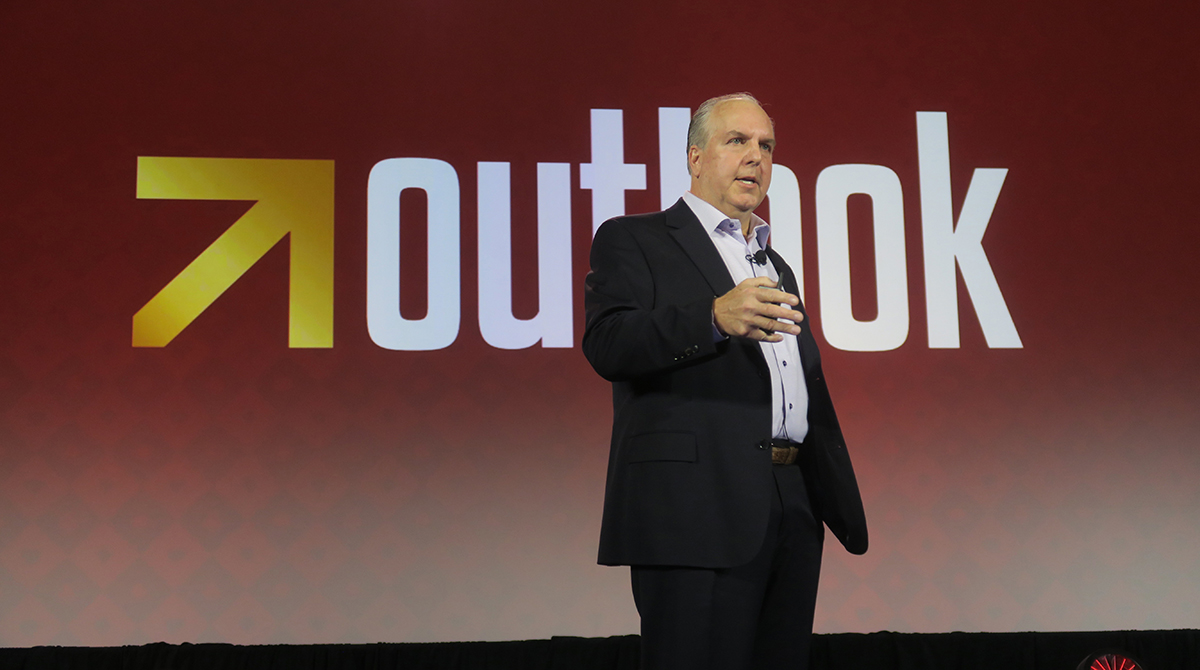 LAS VEGAS — Omnitracs is aiming to shorten the replacement cycle for onboard technology in the trucking industry, in part by driving down the cost of telematics hardware while easing the migration to new systems.

CEO Ray Greer made the case that fleets should upgrade their in-cab technology more frequently, not only to benefit from the latest innovations but also to help ensure system performance and reliability.

“Imagine if your laptop computer were 10 years old, how effective you would be,” he said. “But for some reason, this industry is willing to keep a driver on a 10-year-old device. It doesn’t make sense to me. And it’s counter to this idea of accelerating innovation.”

Omnitracs plans to do its part to help change that dynamic, Greer said at the company’s Outlook 2020 user conference, held Feb. 16-19.

“Our answer to this is we need to bring hardware costs down to a price point that allows it to be refreshed just like your cable company refreshes your hardware,” he said.

Omnitracs has introduced an application designed to simplify and streamline the fuel-tax reporting process for its fleet customers.

Omnitracs Tax Manager, which will become available in March, pulls in mileage and fuel data then automatically files for all states and jurisdictions under the International Fuel Tax Agreement, or IFTA.

The fuel-tax tool is the first new application developed for the company’s unified software platform, Omnitracs One.

The company provided demos of the app at its Outlook 2020 user conference, held Feb. 16-19.

U.S. states and Canadian provinces rely on IFTA to ensure fuel taxes are paid proportionally based on miles driven in each jurisdiction.

As part of that effort, the technology supplier intends to work more closely with truck manufacturers to integrate with the factory-installed telematics hardware they are deploying in their vehicles.

Omnitracs also created a team to plan and manage “end of life” for products that become outdated over time as technology advances.

“There is a very natural tension between supporting and maintaining and sustaining old technology and innovating with new,” Greer said. “And somewhere, as an industry, we need to find the balance between the two.”

The need for more frequent technology upgrades was one of the lessons that Omnitracs took away from a temporary outage of a significant portion of its electronic logging devices in November.

While Omnitracs’ latest systems such as its Intelligent Vehicle Gateway were not affected, its older MCP line of onboard computers experienced an embedded chip failure related to a GPS rollover event, Greer said.

As a result of that outage, drivers temporarily reverted to paper logbooks to record their hours-of-service information until the problem was resolved.

“I’m proud of how this organization responded to it,” Greer said, adding that the company’s employees in Dallas and San Diego “worked feverishly” to fix the disruption. “It was a lot of sleepless nights, a tremendous amount of stress. We got through it.”

Meanwhile, the impending sunset of 3G wireless networks is another factor that will necessitate the move to new telematics hardware.

Greer said he expects that event to occur in about two years.

During 2019, Omnitracs shipped more than 120,000 devices to vehicles throughout North America, and a large subset of those deployments were to support migration off 3G, he said.

At the same time, the company has been working to speed up software development by moving to a unified platform, Omnitracs One.

About 15,000 vehicles are now running on that platform, which combines the capabilities of its Omnitracs, Roadnet and XRS product lines.

The company further expanded the platform’s capabilities through its acquisition of workflow software vendor Blue Dot in March 2019.

That acquisition led to the introduction of Omnitracs Drive, a streamlined workflow through which drivers can update their duty status, perform pre-trip inspections, check information about their destination and view turn-by-turn navigation automatically without switching in and out of multiple apps.

Kenan Advantage Group, the largest liquid bulk carrier in North America, is in the process of moving its 6,500-truck fleet onto the Omnitracs One platform.

Tom Baughman, KAG’s vice president of information technology, said the company is making that move in part to provide a better experience for its drivers.

“We’re really trying to transform our drivers’ day,” he said.

Baughman described the Omnitracs Drive application as “a thread that ties everything together,” including electronic logs and navigation and dispatch data. “It opens up a lot of opportunities for new solutions, new analytics, and better and faster decision-making.”

KAG, based in North Canton, Ohio, ranks No. 27 on the Transport Topics Top 100 list of the largest for-hire carriers in North America.