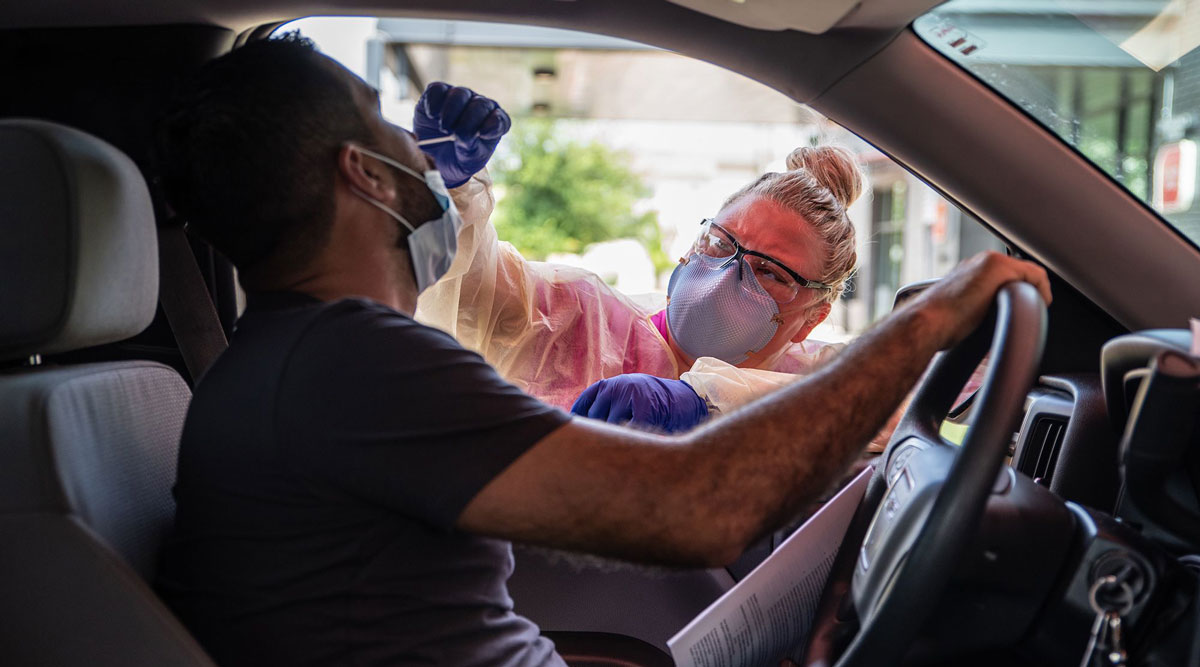 A driver gets tested for coronavirus at a testing center in Austin, Texas, on July 7. (Sergio Flores/Getty Images)

Oil refineries aren’t being spared as COVID-19 sweeps through Texas, which is setting records for new infections and hospitalizations in the U.S. almost daily.

Texas on July 8 posted its second record day of virus deaths, bringing total fatalities in the state to 2,813. Virus cases rose 4.7%, exceeding the seven-day average of 4%, and hospitalizations jumped 3.5%.

The outbreak at the 585,000 barrel-a-day Galveston Bay plant comes as employees there are wrapping up a major turnaround that brought in more than 500 contractors. Work remains on schedule to be competed within about two weeks, the people said.

“We have procedures and protocols in place at all our refineries for keeping the workplace safe, which includes measures to identify, isolate, and trace cases to stem the spread of the virus,” spokeswoman Sid Barth said.

In Houston, the epicenter of Texas’ virus resurgence, about 50 employees and contractors at LyondellBasell Industries NV’s refinery tested positive as of two weeks ago, while 17 others had been placed in quarantine, a person familiar with the situation said. The plant processes 263,776 barrels a day of crude. The company said none of its COVID-19 cases has been work related.

Royal Dutch Shell Plc’s Deer Park refinery on the Houston Ship Channel had nine workers test positive so far this week for a total of 50 since the start of the outbreak, spokesman Curtis Smith said. The number of workers at the plant, which processes 275,000 barrels a day, remains at about 34% of its pre-pandemic level of 3,500.

Phillips 66 confirmed it had virus cases at its 265,000 barrel-a-day Sweeny refinery but declined to share details. Monitoring, isolation or quarantine is taking place as necessary, the company said in a statement.

Total SA has had “a number of positive COVID-19 cases” in some of its U.S. sites, including its refinery in Port Arthur, spokeswoman Marie Maitre said. Workers there are tested entering the site, wear face coverings and work staggered shifts to achieve social distancing.