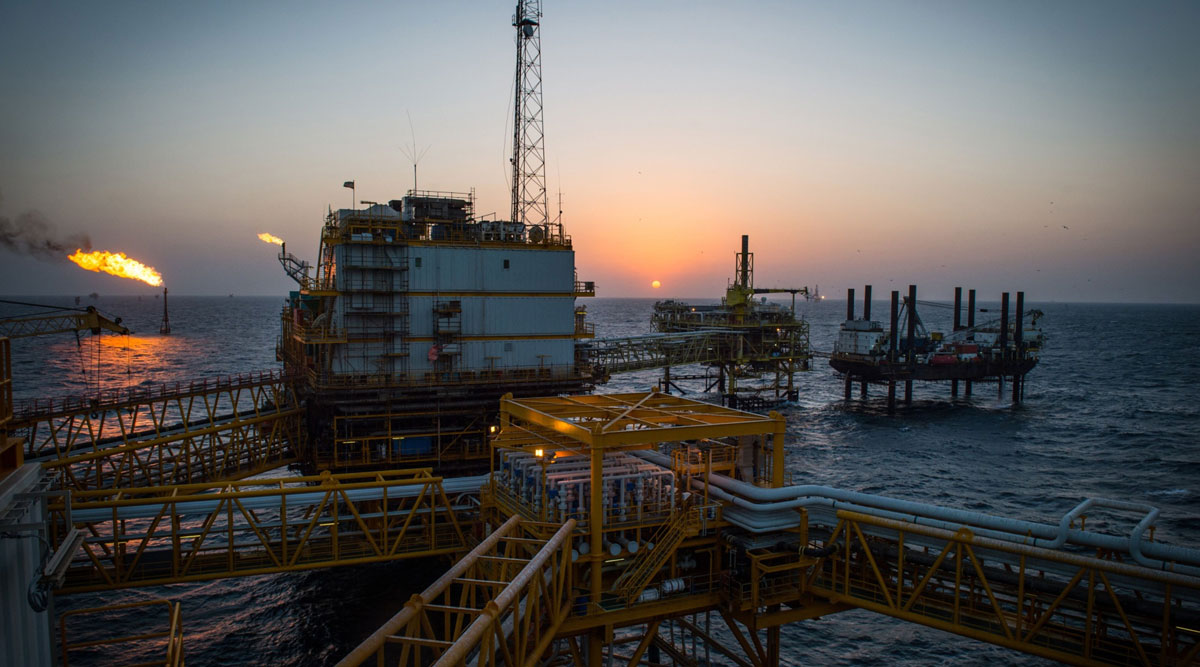 Six months after the coronavirus pandemic’s initial punch, signs of a second wave are already emerging in the oil market.

China’s buying has slowed after the nation binged when crude was cheap. Some of the largest producers in the Middle East are slashing prices for their barrels, signaling a lack of confidence in the recovery. In the U.S., the world’s most visible market, inventories remain stubbornly high. Global benchmark Brent crude on Sept. 8 dropped below $40 a barrel for the first time since June.

While nobody is predicting a return to the dark days of April, when U.S. crude briefly traded in negative territory, the tone of the market has nonetheless turned more bearish. After curbing output by record amounts for months, OPEC and its allies in August began easing back on their cuts — but a corresponding, consistent recovery in consumption hasn’t emerged.

“Everyone’s expectation of this progressively improving demand was too optimistic,” said Gary Ross, CEO of Black Gold Investors LLC. “OPEC made a mistake in reducing the cuts. They lost the momentum in the price by doing that.” 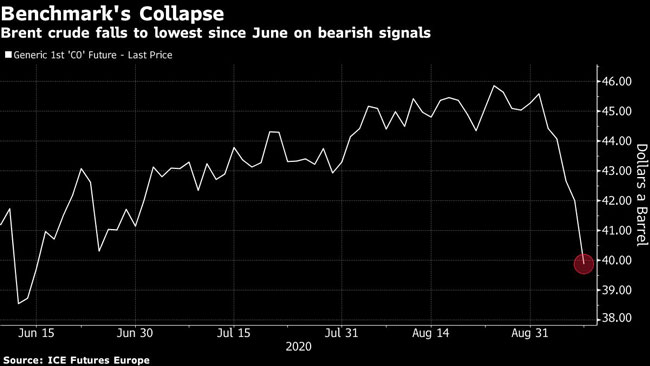 More bad news may be on the way. Coronavirus cases are surging in parts of Europe. India, which consumes roughly the same amount of oil as France, Germany and Britain combined in normal times, is now on track for its first annual slump in four decades as it becomes a hot spot for infections. In the U.S., a seasonal demand increase driven by summer travel, which was already lackluster, has come to an end. Airlines, normally a big source of oil demand, continue to lay off thousands of workers as their balance sheets foretell a bleak future.

“It will take three years for global oil demand to recover from COVID to its new normal, assuming we have a vaccine or a cure,” analysts at Bank of America wrote in a report this week.

In recent days, crude has suffered a double whammy from both its largest importer and exporter. Customs data from China show that the nation’s imports in August fell for a second month, to the equivalent of 11.2 million barrels a day, after reaching a record in June. In addition, private refiners may see their purchases drop by as much as 40% in September and October as state-issued allowances decline. There’s little sign of a meaningful pickup, although the next monthly trading cycle has yet to begin.

Meanwhile, Saudi Arabia cut the official selling prices for its crude for October, and other Middle Eastern producers are starting to follow.

Iraq, OPEC’s second-largest producer, has continued to pump more than agreed under the output deal. The United Arab Emirates, the third-largest, also hasn’t complied recently, according to the International Energy Agency.

Crude is in a market pattern known as contango, where a glut depresses the price of immediate cargoes below those in future months. Earlier this year, the contango was so deep that traders raced to book tankers to store oil — usually a last resort, due to the expense. Now, floating storage is again becoming viable in some regions, mainly because shipping rates have cratered as demand slumps.

On land, stockpiles are slowly dwindling. U.S. crude inventories have dropped by about 8% since peaking in June, government data show. They’re still at the highest for the time of year since at least 1991. Inventories are also dropping in northwest Europe.

“There’s lots of reasons to worry, but there is still a process of clearing inventories,” said Richard Bronze, co-founder of Energy Aspects. “It’s just turning out to be a longer process than at first it looked like it might be. That’s mostly because of softness on the demand side.” 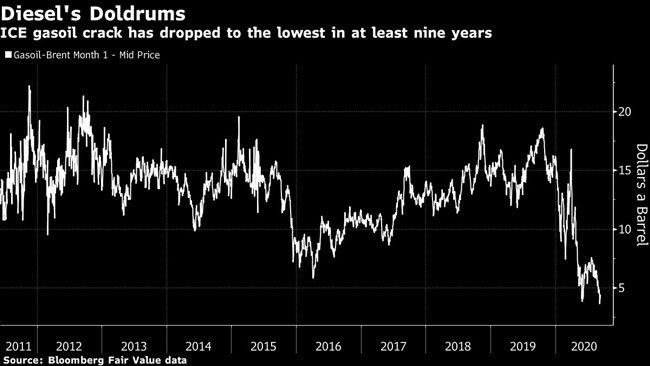 Of particular concern is the diesel market, sometimes viewed as an economic barometer. In Europe, the ICE gasoil crack — the price of the fuel versus crude, and a key indicator of the diesel market’s strength — recently fell to its lowest in at least nine years. Similar measures for the U.S. Gulf Coast and Singapore also show sharp declines.

Like crude, ICE gasoil’s contango structure has also deepened. Globally, there were about 25 million barrels of diesel being held in floating storage at the end of last month, more than double the amount of gasoline, according to analytics firm Vortexa.

“There’s just too much supply chasing too little demand,” said Steve Sawyer, director of refining at Facts Global Energy. Refiners are having to put at least half of the unwanted jet fuel into diesel production, he added. “That has resulted in high stocks, and that’s weighing very heavily on prices, no matter where you are.”

There are some bright spots in the market. The number of supertankers hauling crude to China in the coming months is now at a three-week high, ship-tracking data compiled by Bloomberg show. In Berlin, Shanghai and Beijing, road congestion — a proxy for the market’s recovery — has recently been higher than it was at the same time last year, according to near-real time estimates from the TomTom Traffic Index.

Even though the OPEC+ alliance has eased back on its supply cuts, the group is still at least pledging to cut output by a collective 7.7 million barrels a day for the rest of the year — at any other time in history, curbs of that magnitude that would be unprecedented. The pandemic has hit the U.S. shale industry hard, resulting in widespread job losses, but the effect has been to curb American output by about 25% from its peak in March.

While crude prices have tumbled since the beginning of the month, the drop seems to have hit a wall near the $40 mark for Brent.

“The question is how far,” said Ross of Black Gold Investors, referring to the decline. “At these prices it’s hard to be very bearish.”

Brian Wingfield, Alex Longley and Jack Wittels were the primary contributors to this report.