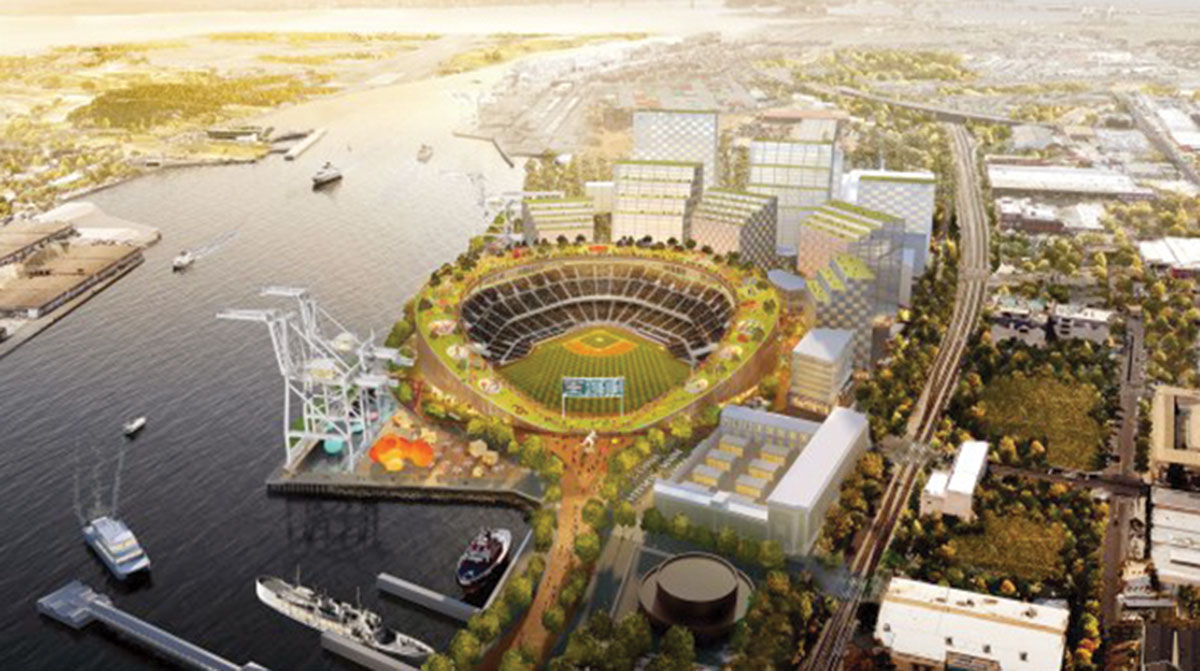 Artist rendering of the proposed ballpark and waterfront development at the Port of Oakland's Howard Terminal. (Courtesy of Bjarke Ingels Group)

The Oakland A’s plans to build a waterfront ballpark and development hit a setback March 16 after a state committee recommended against eliminating maritime use at the Howard Terminal site to make way for the team’s $12 billion plan.

The Seaport Planning Advisory Committee’s decision came after 4 1/2 hours of discussion and public comment. Some committee members said they were concerned that the port would give up valuable space used for freight and truck parking — particularly if cargo usage at the port increases. Six members voted against recommending eliminating maritime uses, and three voted in favor of it. One member abstained.

Some of the committee members said they needed more information from the A’s and the port to understand how the proposed development would not impact maritime operations.

Dave Kaval, president of the A’s, said the decision is a “major setback” in getting the necessary approvals for the waterfront ballpark.

From our perspective ... [that] an unelected body would choose a parking lot instead of approve a privately financed ballpark with 3,000 housing units is really disappointing.

At stake is one of the largest developments in California, one that would bring needed housing, jobs, tax revenue and economic development to Oakland. If the A’s leave Oakland because they can’t build a new ballpark, it would be the third professional sports team to depart in five years.

Committee Chair Jim McGrath also said he didn’t support changing Howard Terminal’s uses because of projected cargo growth and because he hasn’t seen evidence that Howard Terminal “has no utility.”

The committee’s decision comes despite port officials insisting that the maritime operations would not be impacted if the port’s priority-use designation is removed from Howard Terminal.

The committee’s decision is not final. Its vote is a recommendation to the San Francisco Bay Conservation and Development Commission, a state agency that protects the bay. BCDC’s approval is needed for the A’s to build at Howard Terminal.

“The project cannot move forward without (BCDC’s) approvals, and to have one of their key advisory groups vote no, it’s very disappointing,” Kaval said. “I think from our perspective ... an unelected body would choose a parking lot instead of approve a privately financed ballpark with 3,000 housing units is really disappointing.”

The BCDC meeting is scheduled for June 2. The A’s will need to get a two-thirds vote of support to move forward with the project. BCDC could vote against its committee’s recommendation. BCDC staff will release their own recommendation in early April.

Kaval said the team plans to meet with BCDC members before the meeting to answer their questions and concerns.

The committee’s decision comes less than a month after the city council voted to certify the environmental review of the A’s proposed development. That certification triggered a 140-day process, set by state law, for the A’s to get approvals from state regulatory agencies.

The team wants to build a 35,000-seat waterfront ballpark, 3,000 units of housing, 1.5 million square feet of offices, 270,000 square feet of retail space, a 3,500-capacity performance venue, up to 400 hotel rooms and 8,900 parking spaces. If the project gets final approvals — which the A’s are pushing for this year — it would be one of the largest developments in state history.

The Seaport Planning Advisory Committee is made up of officials from ports throughout the Bay Area, environmental groups and transportation agencies.

Its decision is based on an analysis of whether Howard Terminal is needed for port operations and what the impact of opening the area to public access would be. The committee examined how sea level rise and environmental justice issues could affect the project.

Port officials have said that it's not critical to maintain the site for port use despite objections from port workers. Even if the number of cargo ships that use the port increases, port officials said other sites can accommodate the growth. Danny Wan, executive director of the Port of Oakland, said at the March 16 meeting that cargo growth projections have been too ambitious and have failed to materialize over the past 10 years. But some committee members disagreed with Wan's projections and said the reality is that there is some growth.

Wan said "it's clear" that the port doesn't need Howard Terminal for port use, but some committee members disagreed.

Since 2014, Howard Terminal has been used for worker training, truck parking and staging, storage, cargo loading and tugboat docking.