This story appears in the Nov. 30 print edition of Transport Topics.

November freight trends generally are improving, most fleet executives and experts say, but a repeat of the strong 2014 pre-holiday freight peak that bolstered fleets appears to be more hope than fact so far.

That’s the picture that emerged last week in anecdotal comments from a broad range of sources. They commented just before the start of a holiday shopping season when retail sales are expected to rise 3.7%, according to the National Retail Federation. 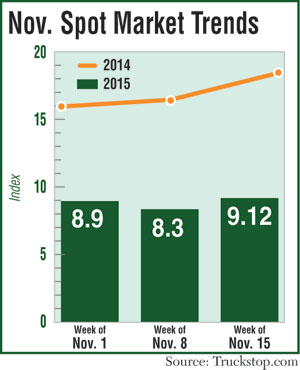 “There is no such thing as a peak this year, but November was better than October,” said Chip Smith, chief operating officer at Rosemount, Minnesota’s Bay & Bay Transportation.

The company, which has brokerage and asset-based trucking units, has seen “some ups and downs” in the freight market in recent weeks. One of the stronger sectors is consumer goods, he said.

“It would be nice if the peak was happening,” he said. “Freight is absolutely softer than this time in 2014.”

“There have been slight increases in different parts of the country,” he said, with particular strength in the Southeast and a truckload market that’s softer than LTL.

“I am not sure there is such a thing as a peak anymore,” said Ike Brown, vice chairman at Cherry Hill, New Jersey’s NFI Industries, which ranks No. 30 on the Transport Topics Top 100 list of the largest for-hire carriers in the United States and Canada. “That term may have run its course.”

Brown did say volumes have been “pretty good” in November, with a steady stream of dedicated and over-the-road freight.

He also said NFI’s warehouses were full during the early fall, indicating that freight may have moved earlier than usual.

Others’ views were mixed.

He believes the current economic conditions are “eerily similar” to the time in 2008 just before the economic collapse as manufacturing demand has dropped sharply.

He cited recent weakness in load board operator Truckstop.com’s Market Demand Index, which has shown no sign of a freight surge this month, unlike the 2014 demand surge that began in early November.

“Demand appears to be up a bit but not materially over what we typically see at this time of the year,” said Paul Newbourne, senior vice president at Armada, a Pittsburgh supply chain management company. “Our pre-Thanksgiving holiday is shaping up pretty well in terms of capacity availability. We have been able to cover most of our spot needs with our core asset providers.”

“Carriers still believe there could be a small pickup in freight demand heading into December,” said Nate Brochmann, an analyst at William Blair & Co. “The peak season rush that we were hoping for is not materializing at this point.”

He added: “The consumer is still in decent shape with gradually improving employment trends and lower fuel costs.”

Earlier in November, at investor conferences, executives from No. 5 YRC Worldwide based in Overland Park, Kansas, No. 6 Swift Transportation in Phoenix and Omaha, Nebraska’s No. 16 Werner Enterprises, blended optimism and realism.

“Retail seems to be hanging in there, although I would have thought by this time, we would have seen a little bit more of the traditional surge for the holiday season,” said James Welch, CEO of YRC.

Swift President Richard Stocking was upbeat, saying, “It wasn’t the October that we were looking for, but November, we’ve seen a seasonal uptick for sure. We are right in the middle of that.”

Werner Chief Financial Officer John Steele was more optimistic, saying, “Freight is beginning to improve, giving us increasing confidence that we [will] have a normal peak season this year and six to eight weeks of seasonally strong peak season demand.”

Automakers remain on track to sell 17.3 million vehicles this year, according to the National Automobile Dealers Association, and hope to have an eighth straight year of sales growth in 2016.

“Things are pretty strong,” President Shepard Dunn told TT. “There is more freight than we can haul. No complaints here except we have to say ‘no’ more than we like to.”

Vehicle demand is growing because interest rates and fuel prices are low, prompting Americans to replace older cars, often with SUVs, he said.

However, Dunn said “most of my friends in the business say it’s slow, flat.”

Times also are good for trailer providers such as Milestone Equipment.

“We are big equipment supply chain providers for [No. 1] UPS, USPS for peak season capacity,” CEO Rob Thull said. “We actually have thousands of trailers that we gear up for that peak for those companies, so that is going to be pretty healthy this year.”