No Hurricane Has Hit US Energy Markets Like Ida Has 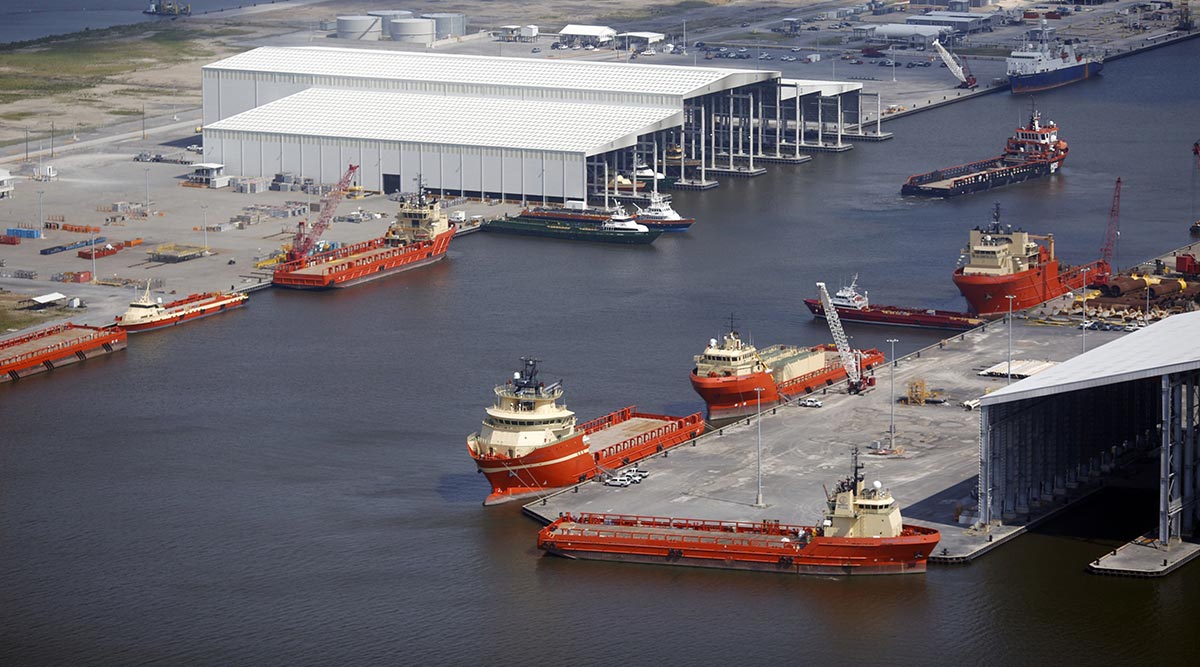 Just over 20% of U.S. Gulf of Mexico oil and natural gas production is back online after Hurricane Ida battered southeast Louisiana, marking an even slower comeback than in the wake of Katrina.

More than a week after the Category 4 storm made landfall, about 77% of the region’s offshore production remains shut, according to the Bureau of Safety and Environmental Enforcement. By comparison, about 60% of oil output and 40% of gas was still offline this long after Hurricane Katrina devastated New Orleans and its environs in 2005.

Many in the energy industry were expecting Gulf supplies to return faster than refining capacity, but now “it seems that it may be the other way around,” said Rebecca Babin, senior equities trader at CIBC Private Wealth Management. 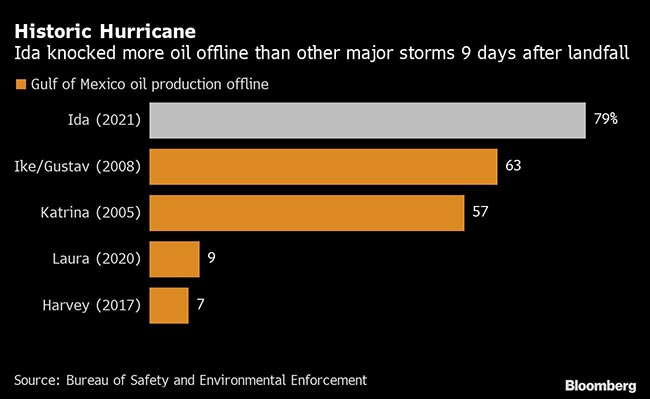 While the loss of life and initial damage reports from Ida were nothing like the monster storm that struck New Orleans 16 years ago to the day, the offshore oil sector is having a tougher time resuming this time. That’s due to extensive power outages and damaged infrastructure on land. It’s also a larger industry now, pumping about 1.8 million barrels a day before Ida compared with 1.5 million ahead of Katrina.

Refineries and petrochemical plants along the Mississippi River also are facing slow restarts, meaning offshore production platforms would be backed up with oil if they resumed immediately. Getting back to full output requires crude flowing freely again through the Gulf Coast’s vast network of pipelines, storage terminals and refineries.

Occidental Petroleum Corp. and Murphy Oil Corp. were the latest to report some platforms could not restart amid a lack of available takeaway capacity. Royal Dutch Shell Plc also has several platforms out of action and is without power at its giant Norco refinery and chemical plant just outside of New Orleans.

U.S. Gulf sour crudes have risen to the highest levels in months as the slow return of offshore production that was shut for Hurricane Ida remains a major concern. Mars, a regional sour crude benchmark, has been among the grades to gain the most. This week, the grade reached the highest premium to Nymex oil futures since the start of this year.

Elsewhere in the Gulf crude market, other sour crudes have also gained from the strength in Mars Blend and overall offshore production uncertainty. Those include Southern Green Canyon, which this week reached the highest premium to Nymex WTI futures since 2020. Thunder Horse crude rose to its strongest premium to U.S. oil futures since May.

The damage at Port Fourchon, where Ida made landfall, is expected to take weeks to fix. The area is a critical shore base that services platforms in the Gulf of Mexico with specialist equipment, helipads and pipelines.

BP Plc, one of the biggest operators in the Gulf, said full operations will only resume once it’s safe “across the supply chain.” While the company is making repairs in Port Fourchon, and nearby Houma, it has temporarily relocated its shore base to Galveston, Texas, and its heliport to Lafayette, La.

The compound effect of the outages will lift crude prices more the longer they go on. “The prolonged outage of oil production in the Gulf of Mexico could be a benefit for an industry that was already worrying that the delta variant spread has disrupted demand recovery, causing supply to slip into surplus later this year,” Babin said.

Occidental said four of its 10 platforms remain shut-in as the company works to assess damage to “third-party midstream and downstream infrastructure.”

PBF Energy Inc.’s Chalmette refinery east of New Orleans will be mostly back online only by next week, the company said in a statement late Sept. 7.

Shell is still assessing damage to West Delta-143, a transfer station that funnels the entire production of the Mars development.

Empire Midstream was expecting to get its power fully restored from electricity providers later Sept. 7, paving the way for the company’s oil assets in the Gulf of Mexico and Louisiana to return to service, says CEO Everard Marks.

— With assistance from Lucia Kassai and Julian Lee.