The Next Generation of Forklifts 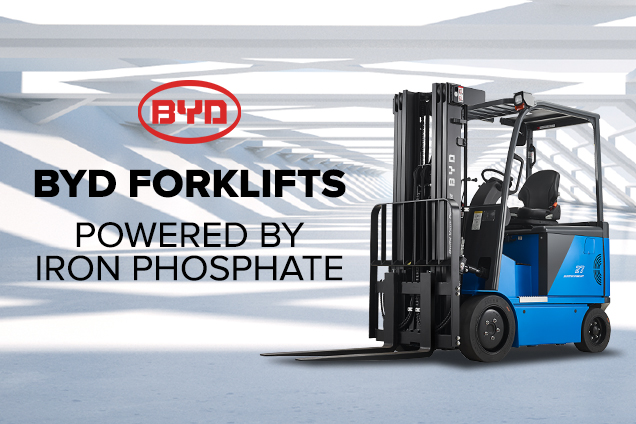 At BYD, we’ve thought that forklifts should keep their operators engaged in moving product rather than engaged equally in charging/re-fueling and maintenance. To that end, BYD offers a line of electric forklifts that offer high level performance while eliminating the need for the long charge times, battery changing, watering, gassing, and dedicated facility space for the same.

The BYD lineup includes Counterbalance forklifts in pneumatic, and now, cushion tires for the North American market. In addition to the Counterbalance line, BYD also offers an efficient and powerful Walkie pallet jack featuring the same Iron-Phosphate battery technology as the Counterbalance trucks along with an on-board charger.

As the first “Forklift built around a battery”, BYD has realized many efficiencies from this vertical integration. With the forklift, battery, and charger all coming from one company, there is no need to look anywhere else to address issues. Stressing over properly matching an electric power package with an electric truck are a thing of the past.

As a first in the industry, BYD also offers a 110v / 15 amp plug-in charger capable of recharging its Iron Phosphate batteries. Applications that were limited to internal combustion engine trucks such as short – term rental, retail, and trade show decorating are now open to electric forklifts due to BYD’s 110v charger. Take it with you wherever you need to go, plug it in a standard outlet, and you’ll be able charge your BYD forklift on site. Because the Iron-Phosphate battery handles opportunity charging easily, you can even plug it in like you would your cell phone.

BYD did not forget operator comfort when designing its forklift line. Ergonomic, full-suspension seats are available on counterbalance models along with intuitive controls, quiet operation, and very minimal heat produced due to its efficient 80 volt power system. There are also enhanced safety features including an Operator Presence Sensor, available Seat Belt Interlock, and Hill Hold to help truck stop on a grade without the worry of rolling backward. Every counterbalance unit also features a programmable steer angle sensor that causes to unit to slow down when turning to help avoid tip-over, programmable regenerative braking, and overload protection.

BYD offers peace of mind for the buyer with a 10-3-1 warranty: 10 years or 20,000 hours on the battery system, 3 years or 6,000 hours on the drivetrain, and 1 year or 2,500 hours on the entire unit.  Whether considering replacement of a fleet of internal combustion engine forklifts or lead-acid battery powered electric trucks, BYD has your solution.