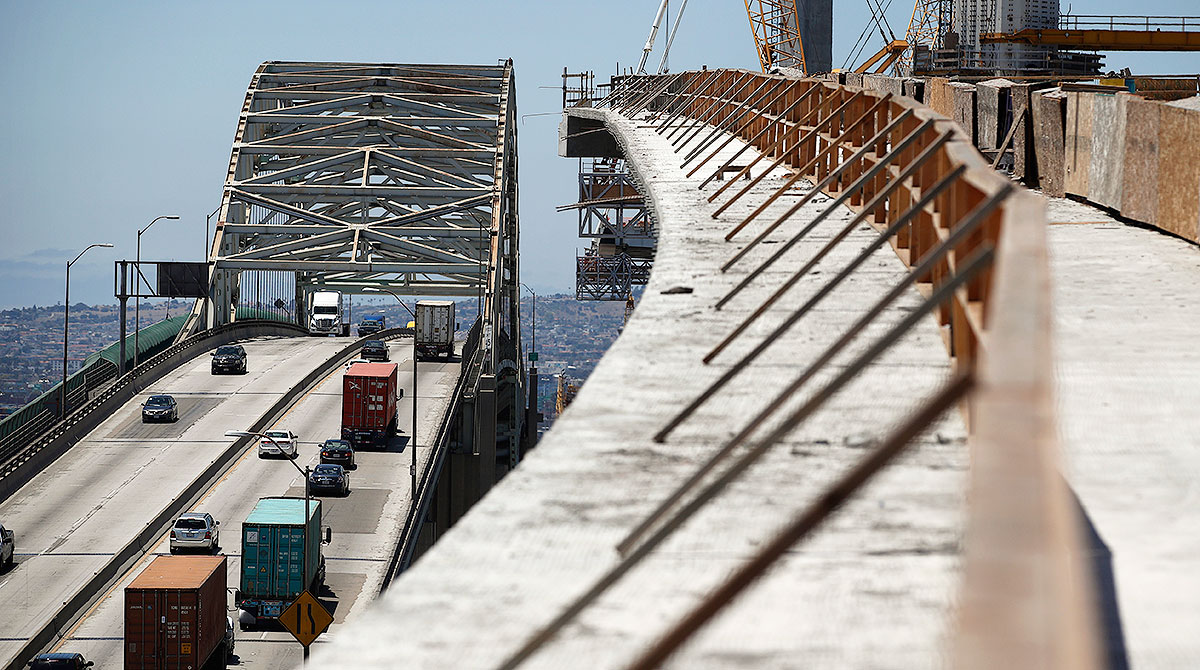 In this July 2, 2018, file photo, traffic moves on the old Gerald Desmond Bridge next to its replacement bridge under construction in Long Beach, Calif. (Jae C. Hong/AP)

Although BUILD grants encompass infrastructure ranging from transit to rail, some funds are meant to directly support truck corridors. For example, $18 million was awarded to help extend a 3-mile portion of U.S. Route 30 in East Canton, Ohio, which is about 65 miles southeast of Cleveland.

“Folks in the trucking industry in Canton have been really focused on expanding because it gives them the opportunity to play in that economically rich area,” Balzer said.

The Board of Commissioners in Ellis County, Kan., received a $6.5 million grant to reconstruct the intersection of two roads, thereby extending an important bypass that circumvents the segment of U.S. Route 183 that passes through the city of Hays. U.S. 183 intersects Interstate 70 in Hays, which lies 80 miles south of the Nebraska border.

Ellis County Administrator Phillip Smith-Hanes said mobility along U.S. 183 can be difficult for truckers hauling large loads, such as wind turbine blades and oil field equipment. Hays received a BUILD grant last year to help construct roundabouts on U.S. 183 to ease traffic along the route, which is flanked with stores, hotels and restaurants.

“Our project really complements that by providing an alternate route,” Smith-Hanes said. “We think it really helps freight movement, particularly for the largest freight.”

In southern Arizona, officials from Pinal County and the city of Coolidge will use a grant for more than $15 million to improve the roadways and railroad crossings leading to the site of Inland Port Arizona, a 2,700-acre industrial park. Pinal County is sandwiched between Phoenix and Tucson, the state’s two most populous cities.

Jackob Andersen, president of Saint Holdings, the real estate company that manages the site of the inland port, said his team has been collaborating with city and county partners to develop the area over the past few years. Andersen noted the site’s proximity to three international airports as well as interstates 8 and 10.

“Being on the cusp of two interstates that service California and Texas is phenomenal for truck traffic,” Andersen said.

Rick Miller, city manager of Coolidge, Ariz., said Stinger Bridge & Iron, located just up the road from the inland port site, is doing the steel work repairs for the Gerald Desmond Bridge, which serves the ports of Los Angeles and Long Beach.

Tim Kanavel, program manager for economic development in Pinal County, said goods flowing through the area range from yogurt and cottage cheese to cotton and hay.

“We have a tremendous amount of different articles coming in and out of the county,” Kanavel said.