More Suppliers Are Unsure About Exhibiting at MATS 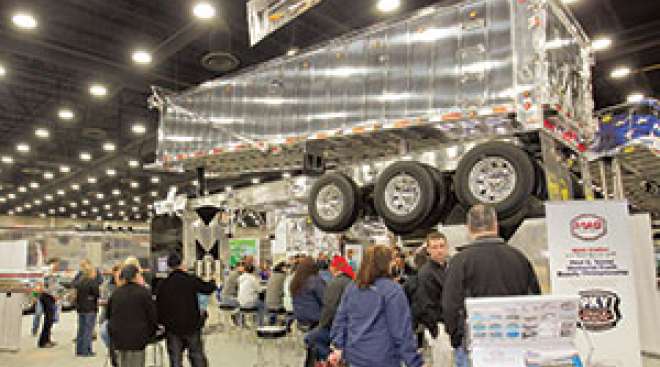 John Sommers II for TT
This story appears in the Nov. 9 print edition of Transport Topics. By mid-autumn, trucking suppliers usually are well into preparations for the Mid-America Trucking Show that takes place each March, but this year is different.

Longtime and recent vendors are undecided about the extent of their participation — and some are bowing out altogether — now that all heavy-duty truck makers have decided to withdraw from the enormous exhibit, casting uncertainty upon everything from foot traffic to recruiting opportunities.

The Mid-America Trucking Show, or MATS, has convened the big show in Louisville, Kentucky, annually since 1972. It takes up more than 1 million square feet of exhibit space indoors and 200,000 square feet outdoors. This year, more than 1,050 companies showcased their innovations in trucks, trailers, equipment, products and services.

But for 2016, Daimler Trucks North America said its Freightliner and Western Star units won’t show, preferring to exhibit every other year instead. That set in action similar moves by Volvo Group to pull Volvo Trucks and Mack Trucks, as well as Navistar International Corp. The break came last month when Paccar Inc. said units Peterbilt Motors Co. and Kenworth Truck Co. won’t show next year, either.

“We’re still developing our plans for MATS 2016 and future shows,” Toby Young, president of Exhibit Management Associates, which founded and operates MATS, said via e-mail. He declined a full interview.

That leaves hesitant industry suppliers as the main exhibitors when MATS kicks off March 31 through April 2 at the Kentucky Exposition Center.

Engine maker Cummins Inc. was unsure despite having come from its nearby Columbus, Indiana-based headquarters to every MATS since the start.

“Cummins is evaluating its plans for MATS at this time,” spokeswoman Carol Lavengood said.

Hendrickson, maker of suspensions, axles and springs for tractors and trailers, will be there but with a hitch.

“We reduced booth size but feel this is an important venue, and we want to be there to support our customers,” said Mark Slingluff, director of marketing.

“This was not an easy decision for us,” said Brandie Fuller, vice president of marketing at Great Dane, a charter exhibitor at MATS with perfect attendance from 1972 to 2015.

But in 2016, the company will shift its marketing efforts to more specific customer segment and then re-evaluate for 2017, she said.

“The industry is evolving and how we reach our customers is changing, so the events that serve the industry will have to change, too,” Fuller added.

“We haven’t made a final decision yet on MATS for 2016,” Meritor spokeswoman Krista Sohm said, noting that the company did not get a booth on the floor last year. “We only had a conference room where we hosted customers.”

Barbara Gould, spokeswoman for Bendix, said: “We currently expect to be a part of the 2016 show.”

The truck makers’ decision to meet at MATS only during odd-number years came not long after this year’s MATS, which logged its best attendance. And, they said their decisions are for 2016 only — not a permanent departure.

Daimler, for example, will participate in the IAA Commercial Vehicles Show in Hanover, Germany, that takes place in even-number years. Likewise, Bendix is a division of brake maker Knorr-Bremse Group, which is based in Munich and participates in IAA.

Also on the minds of those vendors attending MATS next year was how organizers will apportion floor space once truck makers’ spaces are vacated, and then in 2017 when they are scheduled to return.

But Steve Hallas, president of sales at MAC Trailer Manufacturing Inc., said he still can do some good business and is pleased to be returning and keeping his booth in the South Wing — not too far from where Volvo was this year.

“We’re not going to change anything. There may be fewer people, in total, but not necessarily fewer in terms of real buyers,” Hallas said.

MAC exhibits at Mid-America, Hallas said, to appeal to customers and to bolster the company’s dealer network. Not only do MAC dealers take customers to the show, but dealers of other products have asked to join MAC, he said.

Trailer and chassis maker Hyundai Translead will be there, too. “We are definitely going to participate in 2016,” said Glenn Harney, chief sales officer.

Eaton Corp., which supplies transmissions and other components to truck makers, said it, too, will exhibit at MATS in 2016.

“We are going to the show to support our customers, and we still view MATS as one of the premier trucking shows in North America,” spokesman Jim Michels said.

Utility Trailer Manufacturing Co. has not made a final decision.

The show is booked at the Kentucky Exposition Center every year through at least 2020 under contract with the venue and the city of Louisville.