ORLANDO, Fla. — Like a long novel by Charles Dickens, the story of trucking now is one of adversity and opportunity on many key fronts. The for-hire industry faces a shortage of 50,000 drivers by the end of the year — an all-time high. The North American Free Trade Agreement needs updating, but the process appears frozen in adversarial positions. At the same time, truckload freight has grown 4% over the past five months, and trucking responded admirably to recent natural disasters, panelists here said.

“I wasn’t nervous about where NAFTA was headed, but now I am a little nervous about everything that is going on with NAFTA,” said Bob Costello, American Trucking Associations’ chief economist.

The stakes are high, he said.

“This [NAFTA] truck-generated trade produces over $6.5 billion in revenue for U.S. trucking companies,” Costello said. “These are middle-class jobs supported by trade.”

The NAFTA process needs to be improved upon, said Derek Leathers, CEO of Werner Enterprises Inc., a truckload carrier and global logistics company, with extensive cross-border business in Mexico since 1999.

“We are hopeful we are going to continue negotiations that have at the forefront a do-no-harm approach. Our country has the right to look for improvements where improvements might be,” Leathers said, adding he favored the agreement’s remodeling, not a tear down of it — but the process has been “caught up in the confluence of economic reality and political rhetoric, so it is probably going to be a little messy.”

He suggested improvements on the agreement should include faster customs clearance of truckload shipments.

A day after the panel, ATA, the Canadian Trucking Alliance and Mexico's Cámara Nacional del Autotransporte de Carga issued a joint statement encouraging an updated pact that benefits all nations.

“The trucking industries in Canada, Mexico, and the United States have all benefited significantly from NAFTA and we, the national trucking associations from all three countries, urge negotiators to update the trade agreement in a manner that continues to benefit trade,” the statement read in part. “We strongly encourage our governments to update NAFTA to keep North America competitive internationally. In this endeavor, making border crossings and rules governing international commercial transportation more efficient is a crucial element that will only help our industries make North America stronger.”

Werner ranks No. 16 on the Transport Topics Top 100 list of the largest for-hire carriers in North America.

Werner Global Logistics is No. 22 on the TT Top 50 list of the largest logistics companies in the U.S. and Canada.

The fourth round of NAFTA talks concluded in Washington, D.C., on Oct. 17. The fifth round, to be held in Mexico, is scheduled for Nov. 17-21. 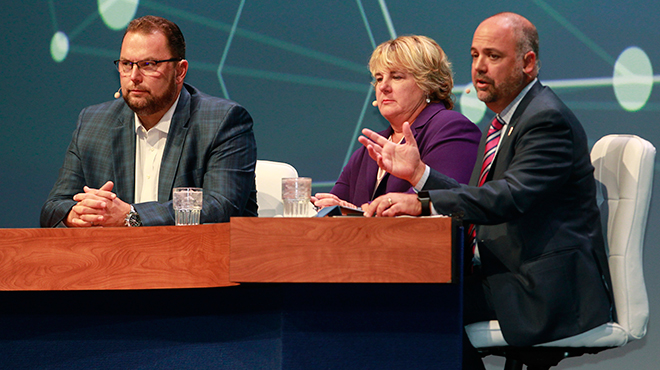 In Florida, GPS-derived statistics showed an uptick in truck activity as Hurricane Irma approached, Brewster said. “Because why? Because the industry was involved in proactive response, preparing Florida communities to deal with the aftermath of the hurricane once it moved through.”

Irma made landfall on Sept. 9. On Sept. 10, trucking activity in Florida was reduced by 84%. The next day trucks went back to work delivering lifesaving supplies, and trucking activity was back to normal 36 hours after Irma, she said.

“We are there to take care of what needs to be done,” Brewster said.

A similar story played out in Houston in August.

As Hurricane Harvey swept ashore in Texas, ATRI’s GPS-data from that time — projected during the panel session as green lines onscreen alongside the storm’s track — showed trucks traveling in the Houston area as the massive storm approached, struck, then lingered, swamping the nation’s fourth-largest city by population.

“We don’t let people know how cool it is to be a truck driver,” Leathers said. “The men and women out there changed lives over the course of those days.”

The panel session, How Do Your Numbers Stack Up, was held Oct. 22 during ATA’s Management Conference & Exhibition.