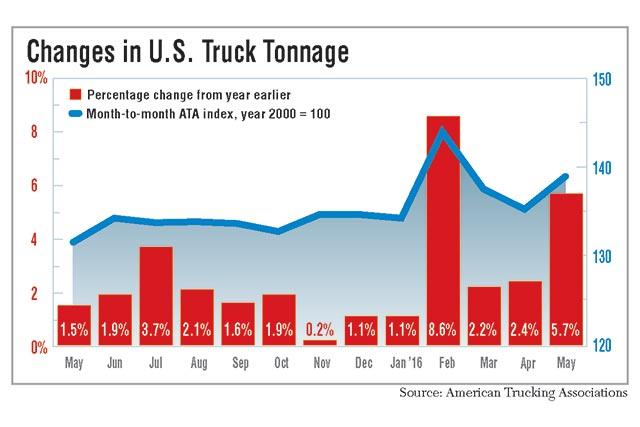 This story appears in the June 27 & July 4 print edition of Transport Topics.

Truck tonnage climbed 5.7% on a year-over-year basis in May and also increased from April, helped by stronger consumer demand and a long-awaited drop in inventories, American Trucking Associations reported.

The June 21 report reversed two consecutive months of tonnage declines and lifted the index out of doldrums seen since late 2015.

Until the latest report, tonnage barely budged for six months from November through April. The Cass Freight Index last week showed a similar pattern, with a 1.3% rise last month over April but a decline of 5.8% year-over-year. The index based on freight bill payments through a St. Louis bank is based primarily on trucking but also includes rail, air and barge freight.

“While one month doesn’t make a trend, this was good news,” Costello said, while simultaneously cautioning that “economic growth remains mixed, and I’d expect the recent choppy pattern in tonnage to continue for the next quarter or two.”

He also welcomed the first drop in nearly a year in the inventory-to-sales ratio, which was slight, from 1.41 to 1.40. That ratio “remains elevated” and needs to decline further. The decline doesn’t need to be steep, he said, because growing online sales require more inventory to assure consistent delivery.

The not seasonally adjusted index, measuring actual tonnage hauled, was 138.9 last month, 4.4% higher on a year-over-year basis and 2.4% above April.

While May tonnage improved, two of the largest truckload fleets last week announced weaker-than-expected quarterly earnings, linking the results to the overall sluggish economy, lower rates linked to excess capacity and other factors.

Werner Enterprises, No. 16 on the Transport Topics Top 100 list of the largest for-hire carriers in the United States and Canada, projected earnings of 21 cents per share to 25 cents, compared with the average analyst forecast of 40 cents. No. 46 Covenant Transportation lowered its earlier forecast by about 10 cents per share to a range of 17 cents to 23 cents.

Costello noted those results don’t conflict with the tonnage report for two main reasons. One is that they cover a quarter of the year, not a single month. The other is that those fleets concentrate on lighter dry van freight, while tonnage is more influenced by heavier flatbed, tank truck and refrigerated moves.

“Overall, we are still seeing a sluggish but positive market,” Jon Starks, chief operating officer at freight consultant FTR, told TT. “The economy and all the company data still show that things are moving, but not robustly.”

He also detected potential signs of strengthening, citing a divergence from the usual patterns around Memorial Day. Load board activity increased in both the week including the holiday and the week after the holiday, he said, which is a different pattern from past years.

“Those are just two weeks,” Starks said, “but I would keep an eye on that. If that pattern holds for the summer months, that is a sign that the market is getting to a more normal status.”

Stifel, Nicolaus & Co. analyst John Larkin noted a “respectable” start in early June, possibly tied to increased produce shipments and less capacity during the Commercial Vehicle Safety Alliance’s Roadcheck because “many truckers choose to vacation in order to avoid the heightened potential of a safety-related citation.”

Overall, Larkin said there is little evidence of a normal seasonal improvement in June as high inventory levels reduce the need to move freight and replenish stocks.

“There still is excess capacity,” said Roxanne Bullard, director of research at load board operator Truckstop.com. She said volumes continue to trail recent years, including a drop of about 15% in May, but seasonal trends that show increased activity in May and June are apparent.

There is enough activity, Bullard said, to create a nearly “even” market, meaning that there is no strong imbalance of capacity.

Starks said the drop-off in spot market loads is a reflection of the fact that shippers are filling predictable freight needs through contracts and aren’t having to tap the spot market for those loads.

He said that he believes the rest of the year will remain relatively steady with small gains, including 2% for shipments and 1% for tonnage on a year-over-year basis. Through five months, ATA’s tonnage index is 4% ahead of last year, swollen by the 8.6% February increase. Costello maintains his 2%-to-3% 2016 tonnage growth forecast.