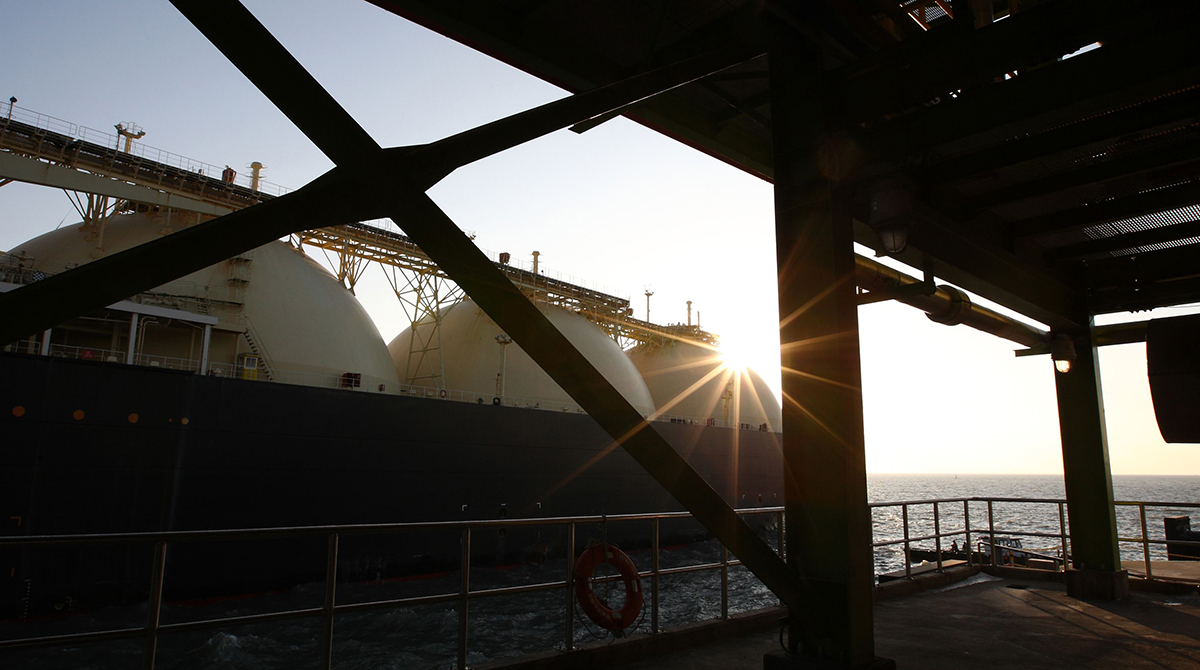 A liquefied natural gas tanker is moored at a port in Incheon, South Korea. (SeongJoon Cho/Bloomberg)

Liquefied natural gas has made a dramatic rebound from a pandemic-induced demand collapse, and the rally in the heating and power-plant fuel could extend into next year.

The onset of colder weather in key importing nations, outages at major production hubs and congestion along global shipping routes have combined to push spot prices in Asia this week to the highest level since 2014, a more than sixfold jump from a record low in April.

Most of those factors are seen persisting into the early weeks of 2021, adding to upward pressure for prompt cargoes. That’s a potential boost for commodity houses that are shifting more resources to trading the fuel and are typically more exposed to spot prices than oil-linked rates.

“It’s going to take three to four weeks before the cavalry arrives with enough supply from Qatar, Nigeria and the U.S., so if you’re a buyer with immediate needs, it’s going to be costly,” said Ira Joseph, head of gas and power analytics at S&P Global Platts.

The Japan-Korea Marker, the benchmark for spot deals in Asia, rose to $12.40 per million British thermal units Dec. 15, according to Platts, which assesses the price. Prices have risen 81% in the past month and are up 564% since bottoming out on April 28. The assessment fell to $12.12 on Dec. 16 when it rolled from January to February prices.

Demand for LNG is expected to grow faster than for any other fossil fuel, according to the International Energy Agency. China, India and emerging Asian markets will account for most of the future growth in imports, the agency forecasts.

The recent run-up in prices could spill over onto end-users, said Peter Lee, a senior oil and gas analyst at Fitch Solutions. Some utilities may favor cheaper alternatives such as coal in the short term, especially in South and Southeast Asia, where environmental policies are more lax, he said.

Pain from rising costs won’t be felt evenly across buyers because most LNG is still sold on long-term contracts linked to oil, said Fauziah Marzuki, a BloombergNEF analyst. Most exposed would be companies that recently signed multi-cargo deals for winter, based on the benchmark.

That’s what happened to China Petroleum & Chemical Corp., better known as Sinopec. The firm in September bought at least 9 cargoes to be delivered between November and March with prices indexed to JKM. At the time, the benchmark was $4.55 per million Btu, less than half the current level.

For much of the year, the LNG market was in a glut so bad that customers canceled dozens of U.S. cargoes. The recent price run-up began in September and intensified in late November, when a massive production train in Qatar shut because of a compressor problem. That came after a series of other outages at plants from Norway to the U.S. to Australia.

Meanwhile, congestion at the Panama Canal has caused recent delays of more than a week for LNG tankers trying to cross to Asia, forcing some ships from the U.S. to use the longer route around Africa. The shortage of tankers has boosted shipping rates to the highest in two years. That could be contributing as much as $2 per million Btu to the cost of LNG in Asia, according to Citigroup.

The spot rally isn’t expected to last past the winter. Warming temperatures will soften demand, supply outages will eventually be resolved and tightness in shipping availability should ease before the end of the first quarter, according to shipbroker Fearnleys. At the Panama Canal, there are already signs congestion is easing after peaking in mid-November.

A spike in the Asian benchmark “seems too much too soon,” and prices above $12 per million Btu won’t be sustainable, Goldman Sachs Group Inc. analysts led by Samantha Dart said in a report dated Dec. 16.

In Europe, prices are headed for the first weekly slide after three weeks of gains, fueled in part by the Asian LNG rally.

Already the market is showing a divergence between prompt and later-dated cargoes. Platts on Dec. 17 raised its midday assessment for late-January prices, while early-March shipments fell.

Still, the surge could have some longer-term implications for global gas markets. JKM has been at the highest premium to Dutch and U.K. benchmarks since 2014. That’s drawing cargoes away from Europe and helping to eat away at inventories that had been at record seasonal levels most of the year.

“Asia is absorbing lots of cargoes and driving down inventories particularly in Europe,” said Oystein Kalleklev, CEO of shipowner Flex LNG Ltd. in Oslo. That means “less risk of a repeat of the flurry of U.S. cancellations seen this summer,” Kalleklev said.

By Dan Murtaugh, Anna Shiryaevskaya and Sergio Chapa with assistance from Stephen Stapczynski and Ann Koh

Baker Hughes Sees Up to Four LNG Investment Decisions in 2021