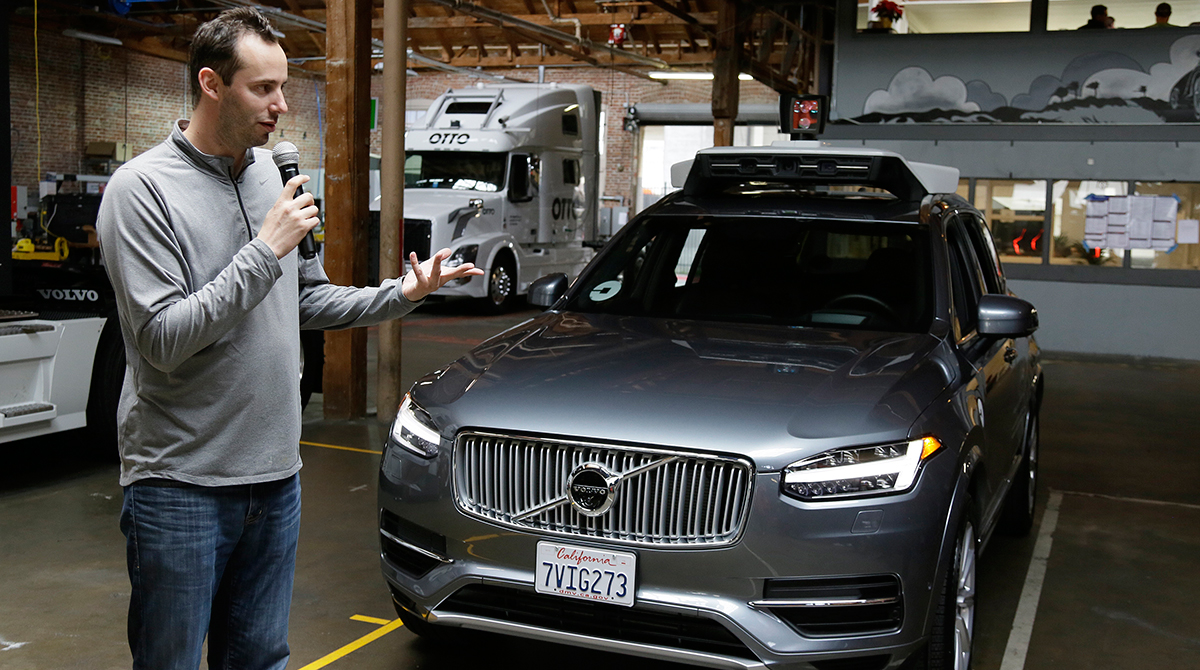 Levandowski, when he was still head of Uber's self-driving program. His new venture, a software company called Pronto, is out with its first product, CoPilot. (Eric Risberg/Associated Press)

Copilot can handle braking, steering and the throttle on a wide variety of road conditions while the driver monitors the road. It is scheduled to be available in early 2019.

“Ours is a highly capable [SAE] level 2 [automation] system and not more,” Levandowski wrote and posted on the website Medium. “Because for all the talk of going straight to level 4, we think it’s much more exciting and promising to first develop and scale a truly great level 2 system.”

The Society of Automotive Engineers defines level 2 automation as when a vehicle has combined automated functions like acceleration and throttle, but the driver must remain engaged with the driving task and monitor the environment at all time.

Pronto’s neural networks — patterned after how a human brain’s neurons operate — combine experience-based AI, end-to-end deep learning, and crowdsourced data with advanced computer vision, resulting in a “highly scalable and flexible driving stack. Nobody else is doing this,” he said. “We are not building technology that tells vehicles how to drive. Instead, our team of engineers is building tech that can learn how to drive the way people do.”

The cost to deploy Copilot is expected to be “orders of magnitude less” than anything else that’s been promoted so far, according to the San Francisco-based company.

Pronto is offering deeply discounted pricing for a limited set of customers who place a fully refundable, no-obligation pre-order.

Pronto says its initial customers will be selected from the pre-order pool based on their fleet profile and the lanes they drive. Introductory pricing is set at $4,999 per truck, which includes bolt-on installation of the camera-based system, driver training and more. The system can be pre-ordered for $299 at www.pronto.ai.

Once Copilot is in widespread commercial availability the price is expected to increase, perhaps as much as two or three times, a company spokesman told Transport Topics. All truck maker software works exactly as before, with Pronto’s simply another layer above it — the truck maker’s software doesn’t know whether the driver is driving or Copilot is driving, according to the company.

Pronto tested the technology in October in a car driven from San Francisco to New York City — 50 hours of driving through 13 states with zero disengages.

Levandowski, who previously formed the autonomous-technology-based Otto Trucking, acknowledged he is a controversial figure in the world of automated vehicles.

He sold Otto to Uber, and it became Uber’s autonomous truck division.

Waymo filed charges against the ride-hailing startup alleging that Levandowski stole trade secrets and patents from Waymo for the development of self-driving technology and brought it to Uber. Levandowski invoked his Fifth Amendment right not to testify in the case.

“One thing I continue to stand by is my safety record, which is second to none in this industry. My teams have a demonstrably impeccable track record. At every company where I have worked, safety was better during my tenure than before or after. On the safety front, I always look forward and am proud to work with and be challenged on a daily basis by the best in the business,” Levandowski wrote.