Leaving Las Vegas: A Drive to Phoenix on U.S. 93 That Many Drivers Don’t Relish 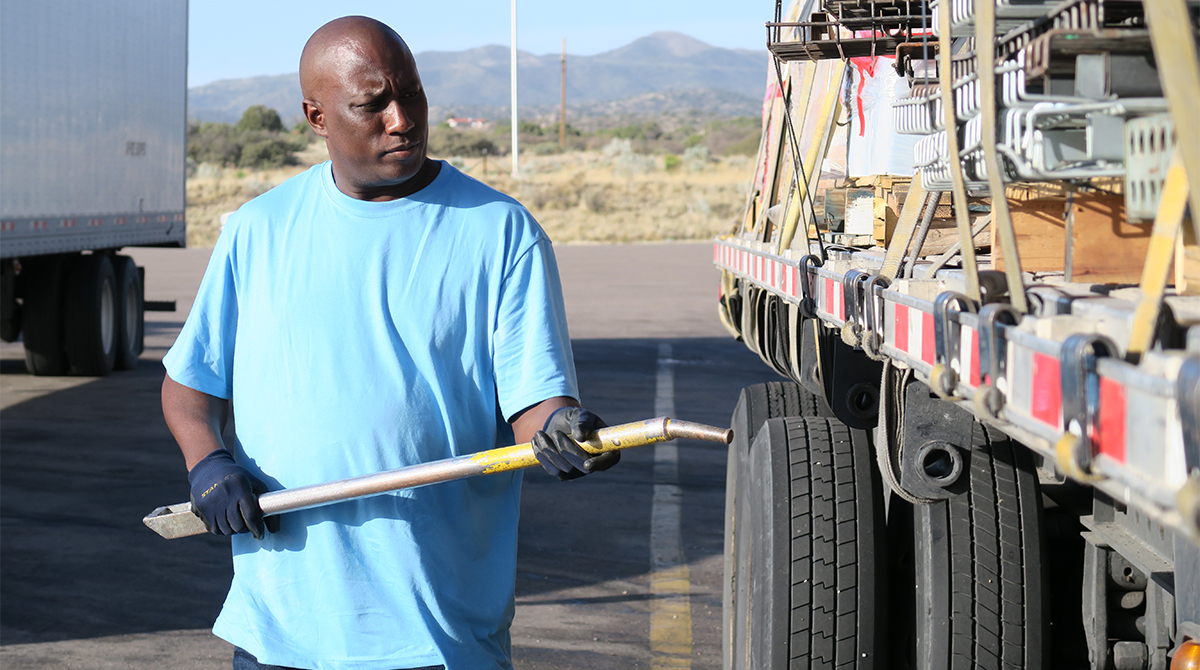 ON U.S. 93 — It’s 5 a.m. in Las Vegas when veteran driver Melvin Cravin gets behind the wheel of a 2017 Freightliner Cascadia and leaves the yard at Truline Corp.

Soon the sun is peeking over the horizon as he barrels down Interstate 515 in the early stages of a six-hour trip to a construction distribution center in Phoenix carrying a relatively light load of steel warehouse racks and boxes of nails on a flatbed trailer.

“This is an automatic transmission, and it’s much easier to drive,” Cravin, 44, told this Transport Topics reporter along for the ride.

Cravin, who has been driving heavy trucks now for 21 years, proudly describes all the safety bells and whistles on the vehicle. They include a lane departure warning system, collision avoidance technologies, and even video cameras pointed inside and outside the cab.

The Freightliner is governed at 67 mph, he said.

Most of the journey was on U.S. 93, a route that many drivers say is among the most dangerous and congested routes they drive for Truline Corp., a 250-power unit, Las Vegas-based regional motor carrier that hauls freight ranging from orange juice to drywall.

A few years ago, a Truline driver lost his life on U.S. 93 when a car crossed the centerline on a two-lane segment of the highway, striking his truck head-on. The driver’s tragic demise is a constant reminder for Truline drivers to stay on their toes — especially on 93.

Cravin said he’s driven 93 to Phoenix and back hundreds of times. However, it’s a route that will only get quicker and safer when a new interstate opens in August. That’s when Interstate 11, a 15-mile segment that will speed drivers around Boulder City, Nev., will trim an estimated 30 minutes off trips like the one Cravin makes nearly every week to Phoenix.

Our reporters kicked off the week with a look at how some new ideas are playing out in Nevada.

But on this recent April morning, about 30 minutes after leaving the Las Vegas yard, it’s easy to see why drivers lament the route. We’re at the point of the journey where three stoplights in nearby Boulder City are known to cause traffic backups in both directions as far as the eye can see.

“Some guys don’t like to drive the 93,” Cravin said. “I’ve seen the Boulder City traffic lights cause a backup that looks like it goes nearly all the way back to Henderson.”

Boulder City, a tiny town on Hoover Dam’s doorstep, is more than 10 miles from Henderson, Nev., a Las Vegas bedroom community of nearly 300,000. 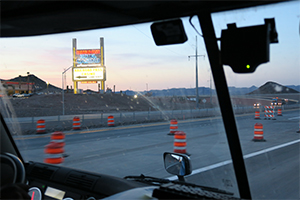 A portion of Interstate 11 is complete near Boulder City. (Eric Miller/Transport Topics)

On our approach to the Boulder City traffic lights, we pass dozens of small businesses on U.S. 93.

After clearing the stoplights, we proceed on a steep downhill grade and sweeping right-hand turn that offers a panoramic view of Lake Mead just past Boulder City. We then climb a hill and ride over a bridge built after the Sept. 11, 2001, attacks that bypasses the Hoover Dam. For some time after the attacks truckers were forced to take a long alternate route around the dam, Cravin said.

The rest of the trip is an intermittent mix of four-lane divided highways and two-lane roads, dotted with Joshua trees. Traffic picks up after we travel through Wickenburg, Ariz., where U.S. 93 turns into U.S. 60 about 50 miles northwest of Phoenix.

U.S. 93, which carries 2,000 trucks a day between the Arizona state line and Boulder City, is currently the shortest and most direct route between Las Vegas and Phoenix, two of the fastest growing cities in America. Las Vegas and Phoenix are the only two cities with a population of more than 1 million without a connecting interstate.

“[U.S.] 93 is bad at night, especially when you get on those two-lane stretches, and people are trying to pass you and they’re not judging the distance right. It’s more taxing mentally and physically tiring,” says David Brower, Truline’s vice president of risk management.

For decades, truckers and tourists have been forced to drive U.S. 93 through Boulder City to get to the Hoover Dam and Phoenix. They include Chris Jenney, also a driver for Truline. “This past year it’s been backed up a little longer,” he said in a telephone interview with TT. He has made the Phoenix trip many times. “These days it’s getting worse. More tourists.”

But I-11 is also slated in upcoming years to be expanded to carry traffic through Arizona from Wickenburg to the Mexican border.

The 2012 Surface Transportation Act officially designated I-11 as the new interstate freeway corridor between the two cities that would eventually replace most or all of U.S. 93 in both Nevada and Arizona.

For truckers, the new interstate couldn’t come too soon. 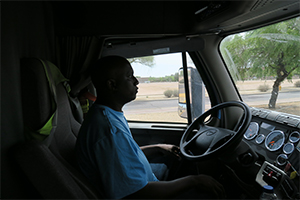 “[U.S.] 93 is not a good road to be on,” said Lenny Edy, a Truline driver with 3 million accident-free miles under his belt and named the Nevada Trucking Association’s Driver of the Year last month. “It can be dangerous.”

Too much of the route doesn’t have shoulders, said Jenney, who’s been behind the wheel of a heavy truck since 1986.

“If you break down, you’re just stuck on the road. When they pass you, you’re right there next to them,” Jenney said.

It gets a little dicey with cars whizzing by when you’re trying to fix a flat, he adds.

Though others might be intimidated, Cravin said he just loves the opportunity to be behind the wheel, despite the destination or the challenge of getting there. On the final leg of the journey, he steers his Freightliner off U.S. 60 and merges onto the Bob Stump Memorial Parkway, Arizona Route 303 — in Phoenix, only minutes away from dropping the flatbed load at the construction distribution site.

“I never get tired or bored driving a truck,” he said. “I’ve wanted to be a truck driver since I was a kid playing with toy trucks.”