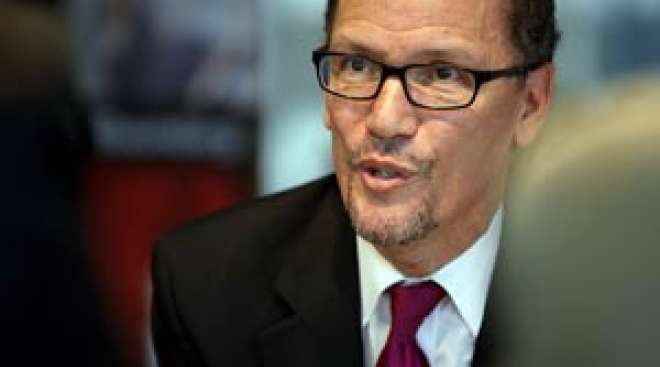 West Coast ports that were closed to incoming cargo over the holiday weekend reopened Feb. 17.

Labor Secretary Tom Perez, who was sent by President Obama to help resolve the labor dispute, arrived in San Francisco.

Perez will urge dockworkers and port operators to reach an agreement quickly at the bargaining table, the White House said. Talks began in May. The negotiations cover about 20,000 union members in 29 ports, including Los Angeles and Long Beach, the two biggest in the U.S. by container volume.

Congestion at the ports has hampered imports and exports, and consumers are seeing the result — whether it’s the rationing of french fries in Japan or shortages of some toys at Christmas.

"Perez has meetings with both parties today in San Francisco," spokeswoman Xochitl Hinojosa told Reuters in an email. "He'll urge the parties to resolve their dispute quickly at the bargaining table. We don't have any updates at this time."

“We welcome the administration’s attention,” Jonathan Gold, vice president for supply chain and customs policy at the National Retail Federation, said in an e-mail. “The slowdowns, congestion and suspensions at the West Coast ports need to end now.” Members of the Washington-based trade group include department stores, grocers and chain restaurants.

Bottlenecks are creating headaches for scores of U.S. companies, including McDonald’s Corp., Macy’s Inc., ConAgra Foods Inc. and Levi Strauss & Co. The port congestion could cost retailers as much as $7 billion this year, according to the consulting firm Kurt Salmon.

Honda Motor Co. said that it may halt some U.S. production because of the labor dispute.

The average time cargo sits at the Port of Los Angeles rose to more than 61 hours in the three months ended Dec. 31, the longest wait in at least two years of quarterly data, according to Parsippany, New Jersey-based INTTRA Inc., which runs a web-based platform that matches shippers with carriers. Wait times at the adjacent Port of Long Beach surpassed 66 hours, up 58% from two years earlier.

The Pacific Maritime Association, the bargaining agent for port employers, has said dockworkers belonging to the International Longshore and Warehouse Union have deliberately slowed cargo handling.

The union has blamed bottlenecks on management practices, such as alliances of ship owners that inefficiently load cargo onto huge container vessels.