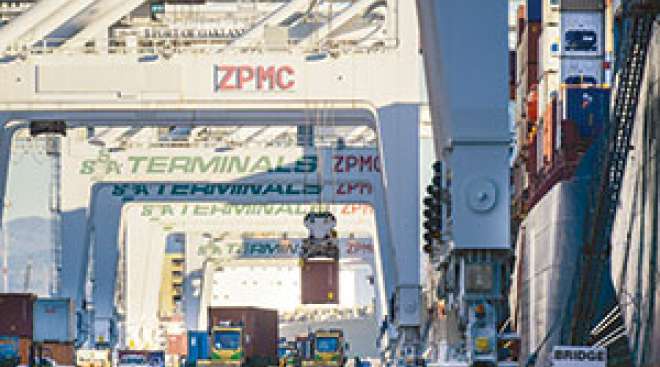 This story appears in the Feb. 23 print edition of Transport Topics.

West Coast contract negotiations continued to drag on without resolution last week despite the injection of Labor Secretary Tom Perez into the talks and mounting political pressure.

Perez arrived Feb. 17 in a bid to forge a contract between the Pacific Maritime Association and the International Longshore and Warehouse Union. Talks covering 20,000 workers at 29 ports are in their 10th month. Delays have mounted in recent months as the parties traded allegations about who was responsible for a 50% reduction in port activity.

Sen. John Thune (S.D.), chairman of the Commerce, Science and Transportation Committee, and House Transportation and Infrastructure Committee Chairman Bill Shuster (Pa.) were among those who told President Obama “to act quickly to ensure our nation’s ports remain open to commerce.”

“The dispute has already had a substantial negative impact on the movement of goods throughout the nation, and the effects continue to grow as each day passes,” the letter said, citing idle ships, empty store shelves, imperiled export markets and more manufacturing production disruptions.

Among those commenting last week was Honda Motor Co., which said some production would be curtailed because of a parts shortage. Wal-Mart Stores Inc. said it is beginning to feel the effects of disruptions, too.

The Republicans said that Obama needed to take further action if there was no deal by March 2. The last time a president stepped into talks was in 2002, when George W. Bush imposed federal labor law provisions to end a 10-day lockout.

While the public outcry grew, talks continued last week behind closed doors. Neither side commented when asked by Transport Topics.

The National Association of Manufacturers estimated the economic cost of a port shutdown this year at $2.1 billion per day.

Domestic freight executives used words such as “crapshoot” and “disaster” to characterize the situation.

Port truckers who typically make three trips a day were down to one. Costs to move cargo that is flowing are reported to have doubled.

“I haven’t seen anything yet from the negotiations to make me feel warm and fuzzy,” said Curtis Whalen, executive director of American Trucking Associations’ Intermodal Motor Carrier Conference.

He told TT on Feb. 19 that he was encouraged that federal and industry administrators are looking into the issue of delay-related fees that ocean carriers impose on truckers.

Truckers are upset about millions of dollars in charges for containers that can’t be returned in time because ports won’t accept them.

Meanwhile, West Coast rail intermodal loadings have dropped 10% or more in recent weeks, based on Association of American Railroads statistics.

Others projected widespread problems when the logjam finally breaks.

Thom Albrecht, an analyst for BB&T Capital Markets, envisioned a “freight storm that could be unleased” in the form of skyrocketing trucking and freight rates in the West.