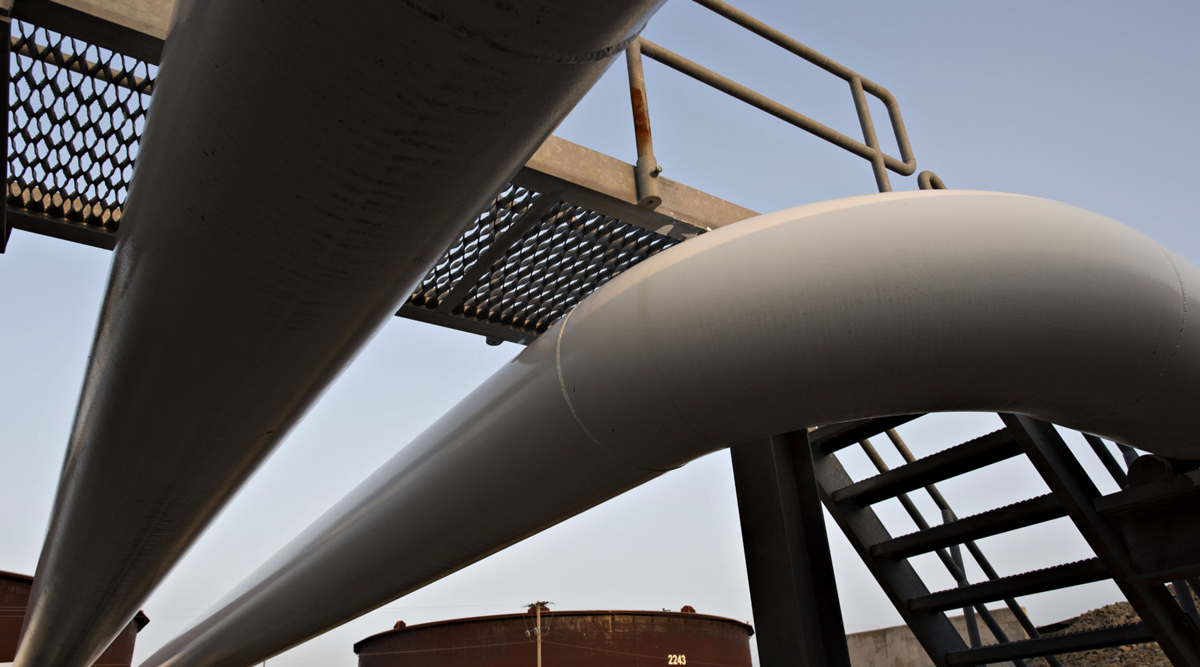 Stockpiles in Cushing, Okla., the delivery point for West Texas Intermediate oil futures fell nearly 4 million barrels in the last two weeks, bringing inventories to the lowest since March 2020 when the pandemic forced the country into lockdown. Analysts are estimating and traders are betting that supplies will drop to multiyear lows by the end of the summer.

Inventory levels at the massive complex, which houses crude oil produced across West Texas, the Midwest and western Canada, arguably has more sway over oil prices than anywhere else in world. With U.S. shale production still 15% off of its pre-pandemic peak and imports from Canada running low there is a growing consensus among trading house and Big Oil executives that prices are set to surge as supplies tighten.

“The U.S. domestic market was actually caught by significant out-performance of domestic refinery runs compared to the view most market participants had just 2-3 months ago,” said Rystad Energy AS analyst Artem Abramov. There has also been some lag on imports, he said. 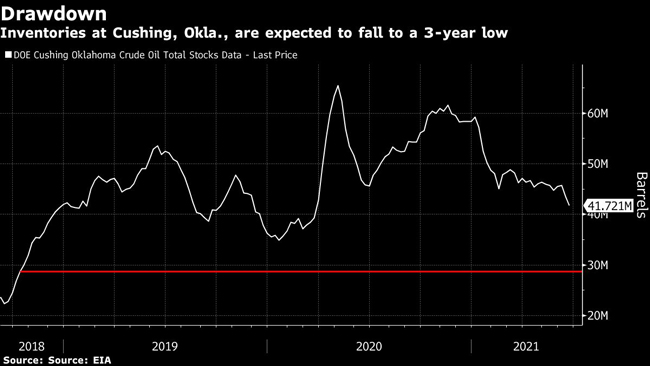 Rystad sees Cushing stockpiles falling to around 21 million to 23 million barrels by the end of summer. If inventories fall to 21 million it would be the lowest since 2011.

It’s a stark reversal from a year ago when a market price crash devastated the oil industry as demand slid from pandemic-fueled restrictions. It forced traders to stuff unwanted crude into storage globally until consumption improved, shifting the market to a steep contango where oil for immediate delivery trades at a discount to forward supply.

At the heart of the decline is a lack of a type of oil called Domestic Sweet or DSW that is produced by blending a cocktail of crudes, including supplies from the Permian and the Midwest, according to market participants. Output recovery in the Midwest, where Cushing tanks sit, has been the slowest among all producing regions.

“The lack of available DSW is undoubtedly tightening WTI–spec balances at the hub,” according to a note from consultants Energy Aspects. This and strong exit flows could push Cushing stocks in August and September to around 27 million barrels and 24 million barrels, respectively, they said.

Stockpiles at Cushing, currently at 41.7 million barrels, could drop to the lowest in almost 3 years as refineries ramp up fuel-making and oil production is still lagging, said Chris Sloan, a Houston-based analyst with BB Energy USA. Inventories could fall to the 30-million-barrel range in the next three months, he said.

The steep backwardation of the oil market is also driving the inventory drawdown. When barrels for prompt delivery fetch much higher prices than those marked for the future delivery, traders and producers are motivated to sell product.

The drawdown of Cushing is being exacerbated by the reversal of the Centurion pipeline, which instead of transporting crude to Cushing is now taking oil away from it, and because the current market structure favors sending Permian barrels to the Gulf, instead of for storage in the Cushing hub, said Hillary Stevenson, director of oil markets at Wood Mackenzie Ltd.

Higher crude prices and increasing costs for refiners to meet biofuel blending mandates are expected to keep a lid on refinery runs, said Fernando Valle, a New York-based analyst with Bloomberg Intelligence. Refineries’ utilization rates in the 92% range are close to plateau and a pricey WTI doesn’t help with exports.

“U.S. states will start removing COVID-related unemployment benefits in early July and that may impact fuel consumption,” he said.