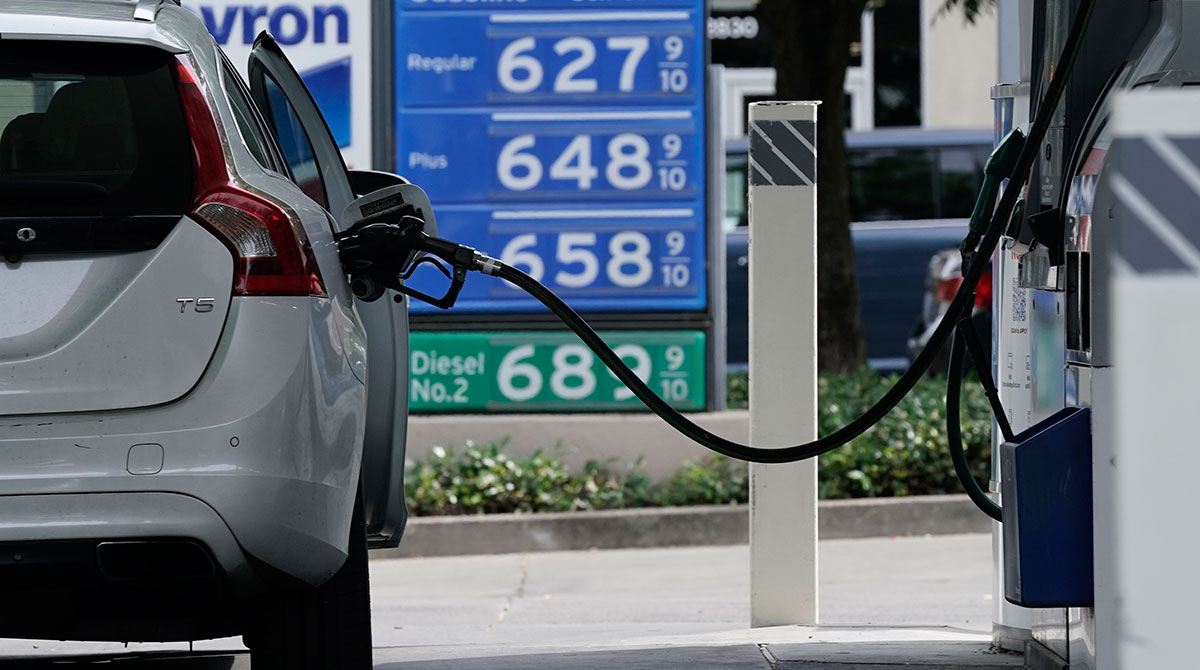 Gas is advertised for more than $6 per gallon at a gas station in Sacramento. (Rich Pedroncelli/AP)

WASHINGTON — A measure of inflation that is closely tracked by the Federal Reserve jumped 6.3% in May from a year earlier, unchanged from its level in April.

The June 30 report from the Commerce Department provided the latest evidence that painfully high inflation is pressuring American households and inflicting particular harm on low-income families and people of color.

The government’s report also said that consumer spending rose at a sluggish 0.2% rate from April to May. Consumer spending is beginning to weaken in the face of high inflation. But it’s still helping fuel inflation itself, especially as demand grows for services ranging from airline tickets and hotel rooms to restaurant meals and new and used autos.

On a month-to-month basis, prices rose 0.6% from April to May, up from the 0.2% increase from March to April.

Chronically high inflation has become a leading threat to the economy and a political hazard for President Joe Biden and Democrats as midterm elections near. Seventy-nine percent of U.S. adults describe the economy as poor, according to a new survey from the Associated Press-NORC Center for Public Affairs Research. Inflation is eclipsing the healthy 3.6% unemployment rate as a focal point for Americans who are struggling, in particular, with high gasoline and food prices.

In response, the Fed has embarked on a series of aggressive interest rate hikes that are intended to slow growth by making borrowing more expensive but that also risk causing a recession. Two weeks ago, the Fed raised its key rate by three-quarters of a point — its largest hike in nearly three decades — and signaled more large rate increases to come.

The Fed tends to monitor the inflation gauge, called the personal consumption expenditures price index, even more closely than it does the government’s better-known consumer price index. While the components of the two indexes differ — CPI tends to weigh gasoline and housing costs more heavily and to show higher inflation — the two gauges tell the same basic story: Inflation is running dangerously hot.

The June 30 report showed that consumer incomes rose 0.5% from April to May, staying slightly ahead of inflation. In addition, the savings rate rose slightly to 5.4% last month, though it remains well below its peak of nearly 34% in April 2020. At that time, millions of Americans were banking government relief checks and otherwise saving money while staying at home as a precaution against COVID-19.

Soaring prices are a consequence of the economy’s unexpectedly swift rebound from the pandemic recession of 2020. Boosted by government stimulus checks, record-low borrowing rates and savings built up while stuck at home during the pandemic, consumers went on a spending spree that caught businesses off guard and overwhelmed factories, ports and freight yards. The resulting shortages of goods and labor sent prices spiking.

The Fed was slow to recognize the severity of the inflation threat, dismissing it as mainly a temporary consequence of supply chain bottlenecks. But spiking prices have proved intractable, and now the central bank is playing catch-up with sizable rate hikes that could end up derailing the economy.

High inflation has made consumers increasingly anxious about the economy. Prices have risen faster than their earnings and eroded their purchasing power. A measure of consumer confidence has reached its lowest point in 16 months, with Americans’ outlook darkened by inflation fears, especially gas and food prices.