This story appears in the May 23 print edition of Transport Topics.

CHILLICOTHE, Ohio — Gridiron rises on the roof of Kenworth Truck Co.’s assembly plant here as a new structure takes shape to automate the storage and retrieval of painted truck cabs, sleepers and hoods awaiting trim, while down below the company continues building trucks — but at a reduced rate since last year.

Company officials attributed that to a softer market.

“The day shift is running at our maximum day-shift capacity, 80 trucks [per day]. Our total build rate right now is about 128 trucks. So evening shift isn’t quite maximized. That’s a reflection of where we are in the market today,” plant manager Judy McTigue said. 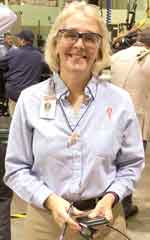 Both shifts have the same potential capacity, she said.

“We ran pretty much all of last year at maximum capacity, but as you know, the market has softened so you try to adjust soon and not overbuild. So that’s where we are right now. We made that adjustment last year,” she said.

McTigue said Kenworth handled the adjustment well, keeping an eye on the market and “feathering us down” in the way we needed to. “Because of that, we have been very stable this year. The first quarter is always a bit sluggish, but we are pretty healthy right now.”

Paccar Inc., the parent company of Kenworth and Peterbilt Motors Co., forecasts U.S. and Canadian retail sales this year will shrink to a range from 220,000 to 250,000, said Kurt Swihart, Kenworth’s director of marketing. That compares with 280,000 in 2015.

McTigue said Kenworth has nice “visibility,” describing that as the build rate for orders. “The build schedule is full,” she said. “We don’t like as a plant, [and] the suppliers don’t, for that to be less than 15 days. We are sitting now at a little over five weeks.”

Kenworth’s two latest models, the T680 and T880, launched in 2012 and 2013, respectively, account for 90% of production at the plant here, replacing earlier legacy models, Swihart said.

He spoke to reporters during a ride-and-drive event that included the latest configurations of the trucks and components, including a T880 40-inch sleeper tractor, a T680 52-inch mid-roof sleeper tractor that weighed about 14,200 pounds with a partially filled fuel tank, the Allison 4700RDS 7-speed automatic transmission used in a T880 day cab with cement mixer body, as well as Paccar’s 10.8-liter MX-11 and 12.9-liter MX-13 engines.

Swihart said the year-end total could reach the “third-highest in the last 10 years.”

He cited several encouraging trends including a rise in tonnage, gains in the ISM index of supply chain activity, housing and construction starts “doing well,” 5% unemployment and crude oil climbing back toward $50 a barrel.

Meanwhile, those painted pieces awaiting trim now wait outside before being installed on chassis at the plant and attended by workers and robots across multiple stops. Then they head to the rooftop.

McTigue likened the rooftop addition to European auto storage garages where the vehicles are put on geopallets that are indexed, lifted and positioned to be pulled down when needed, automatically.

“It’s basically a vending machine for cabs,” she said, adding it would improve safety and efficiency. “We will have employees doing more value-added activities versus tugging that product around.”

She has been manager of the plant for about 2½ years. Before that, McTigue held the same position at Kenworth’s assembly plant in Renton, Washington. She has been with Bellevue, Washington-based Paccar for 19 years.

“You really kind of get addicted to this industry once you get in it,” McTigue said.