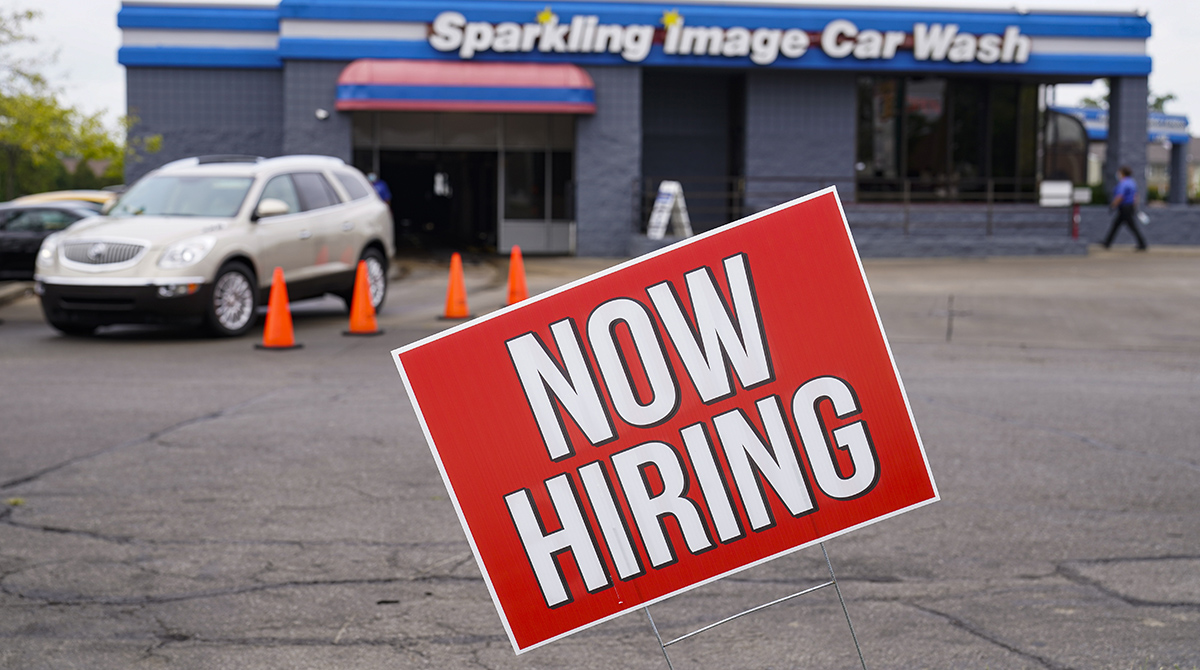 WASHINGTON — The number of Americans seeking unemployment benefits fell for a third straight time last week, the latest sign that employers are laying off fewer people as they struggle to fill a record number of open jobs and meet a surge in consumer demand.

The Aug. 12 report from the Labor Department showed that jobless claims fell to 375,000 from 387,000 the previous week. The number of applications has fallen steadily since topping 900,000 in early January as the economy has increasingly reopened in the aftermath of the pandemic recession.

Filings for unemployment benefits traditionally have been seen as a real-time gauge of the job market’s health, but the measure’s reliability has deteriorated during the pandemic. In many states, the weekly figures have been inflated by fraud and by multiple filings from unemployed Americans as they navigate bureaucratic hurdles to try to obtain benefits.

Those complications help explain why the pace of applications remains comparatively high. Before the pandemic paralyzed the economy in March 2020, unemployment applications were running at about 220,000 a week.

Many states, for example, require self-employed and gig workers to first seek conventional unemployment benefits — and be turned down — before they can apply through a program that was set up last year to provide jobless aid to them for the first time. That program, and a $300-a-week federal supplemental unemployment benefit, will expire nationwide in the first week of September. About 22 states, mostly led by Republican governors, already have canceled both programs.

About 12 million people are receiving unemployment benefits, down sharply from the previous week’s figure of nearly 13 million. That drop reflects that more Americans are being hired and no longer receiving benefits. Another factor is the cancellation in many states of the federal program for the self-employed and a separate program for the long-term jobless.

For now, nearly 8.7 million people continue to receive aid through those programs and will lose their benefits when those programs expire nationwide Sept. 6.

So far, there has been little sign that the delta variant has depressed hiring or prompted layoffs. In July, employers added a substantial 943,000 jobs, the government said last week, and the unemployment rate sank from 5.9% to 5.4%. Average hourly earnings jumped a sharp 4% in July from a year earlier, indicating that employers have felt compelled to raise pay. Still, that report was based on a survey that was conducted in mid-July, before a surge in COVID-19 delta cases took off.

On Aug. 9, the government reported that employers posted more than 10 million available jobs in June, the most on records dating to December 2000. That meant there were more open jobs than there were unemployed people that month. Yet those figures, too, predate the recent spike in COVID cases.

But credit card spending on airline tickets has fallen 20% from a mid-July peak, according to economists at JPMorgan Chase, suggesting that in response to the increase in infections, consumers may be starting to slow their travel spending, which had jumped in recent months.

And after returning to pre-pandemic levels for much of June and July, restaurant traffic dropped about 10% below that level in the past week, according to restaurant software provider OpenTable.