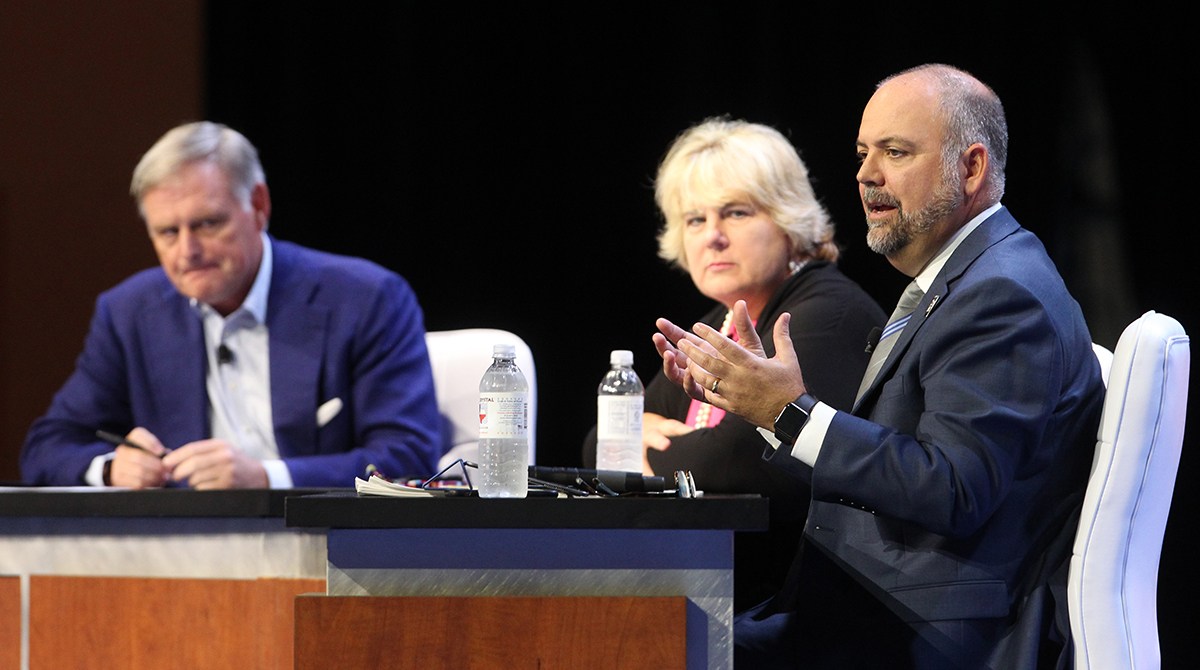 AUSTIN, Texas — The Highway Trust Fund, struggling to stay relevant amid a shifting transportation environment, can be fixed with more money flowing in from fuel sales, trucking industry experts said as they advocated for repairing and expanding the nation’s infrastructure.

A plan they supported would provide the trust fund with an additional 20 cents per gallon from sales of gasoline, diesel and natural gas fuel. That increase, under the Build America Fund, would be applied at the wholesale terminal rack, before the fuel reaches the retail gas pump, and would be indexed to inflation and improvements in fuel efficiency, according to American Truckings Associations, which crafted the proposal.

The need for a much-improved infrastructure comes against a backdrop of worsening traffic congestion, expanding international trade along the borders and at ports, and a supply chain quickly adapting to accommodate a rush toward e-commerce.

The speakers made their comments during a session titled “The Cost of Doing Nothing, Why We Need Infrastructure Investment Now” at ATA’s annual Management Conference & Exhibition here Oct. 28.

She added that ATRI studies have shown the fuel tax “is clearly” the most efficient means of delivering revenue to the transportation system — but that approach faces an uphill climb in the current Congress, whose majority is leery of being seen as levying more taxes.

One trucking executive offered a different definition of a fuel tax.

“The fuel tax is not a tax. It is an investment. It has worked relatively efficiently, but it needs to be changed,” said Tonn Ostergard, chairman and CEO of Crete Carrier Corp., a truckload carrier based in Lincoln, Neb.

The Build America Fund would bring in $340 billion during the first decade with an average annual cost on a passenger vehicle of $100, a box truck of $350 and on a Class 8 tractor of about $2,100, he said.

With the money coming in to fund infrastructure now, 90 cents of every dollar goes to pay for existing infrastructure, a system that is 65 years old, and 10 cents goes toward new capacity, he said.

For several years, the trust fund primarily has been relying on general revenue funds, Ostergard said. “We are woefully short on new build-out.”

Meanwhile, the average motorist loses about $600 annually due to higher maintenance and vehicle operating costs just from rough roads, he added.

“I can tell you for our trucks, it’s a lot more than that,” Ostergard said.

At the same time, regional distribution centers — supplied by truckload carriers — are flourishing to support the two-day delivery windows common in e-commerce, and related inventory held in the supply chain is being cycled through faster, ATA Chief Economist Bob Costello said. 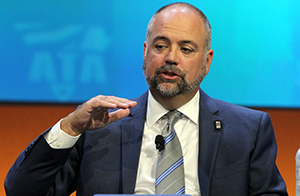 The changing supply chain “has added to a lot of congestion in major metropolitan areas,” he said.

In the meantime, the cost of inaction on the infrastructure will become even worse in the years to come “because the investments we need to make today are going to take years to build out,” Ostergard said.

Crete Carrier Corp. ranks No. 34 on the Transport Topics Top 100 list of the largest for-hire carriers in North America.

The day before the panel, ATA President Chris Spear during another MCE session sought the support of Ray Martinez, administrator of the Federal Motor Carrier Safety Administration, for revamping the revenue stream destined for infrastructure.

“The roads and bridges continue to deteriorate. This is a safety issue,” Spear said.

Spear told Martinez the association was going to be “very active” in getting its Build America Fund made into law in 2019.

“And we really want to partner with you and your agency on the safety argument. There are a lot of other arguments we are going to be active on, but this particular one is directly in your jurisdiction,” Spear said.

The current funding challenges, Martinez said, haven’t really stopped the Department of Transportation from acting. “We are out there doing grants everyday, and so are my colleagues in the other modes.”

But, he added, “It is a safety issue, no question. The dilapidation of our infrastructure is dangerous, not just for the commercial motor vehicle industry, but for everybody who shares those roadways.”

One aspect he has heard much talk about is improving safe rest areas for truckers “whether that is through greater incentivization or better use of technologies for finding the availability of parking that is out there already.”

“I definitely want to be part of that conversation,” Martinez said, “and I do view it as an infrastructure challenge.”