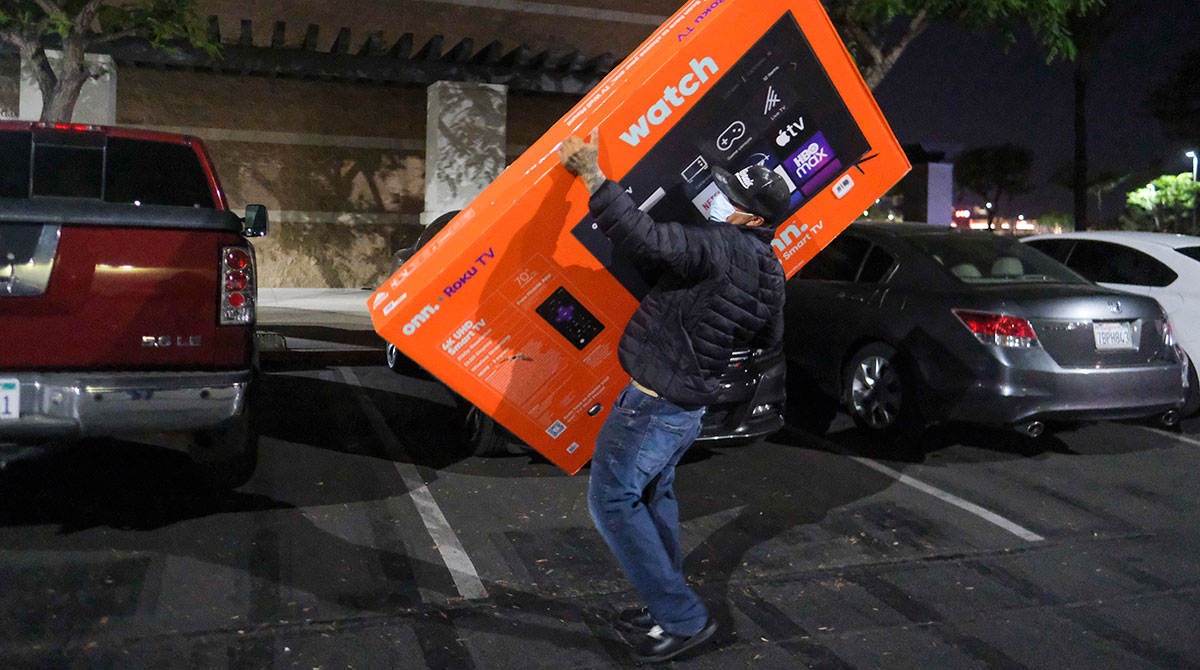 A Black Friday shopper leaves a Walmart store with a TV in Pico Rivera, Calif., on Nov. 26. (Ringo H.W. Chiu/AP)

BUDAPEST, Hungary — From appliance stores in the United States to food markets in Hungary and gas stations in Poland, rising consumer prices fueled by high energy costs and supply chain disruptions are putting a pinch on households and businesses worldwide.

Rising inflation is leading to price increases for food, gas and other products and pushing many people to choose between digging deeper into their pockets or tightening their belts. In developing economies, it’s especially dire.

“We’ve noticed that we’re consuming less,” Gabor Pardi, a shopper at an open-air food market in Hungary’s capital, Budapest, said after buying a sack of fresh vegetables recently. “We try to shop for the cheapest and most economical things, even if they don’t look as good.”

Nearly two years into the COVID-19 pandemic, the economic impact of the crisis remains even after countries raced out of debilitating lockdowns and consumer demand rebounded. Now, another surge of infections and a new coronavirus variant, omicron, are leading countries to tighten their borders and impose other restrictions, threatening the global economic recovery.

Omicron has raised new fears that factories, ports and freight yards could be forced to close temporarily, putting more strain on global commerce and sending prices even higher.

The economic reverberations are hitting central and Eastern Europe especially hard, where countries have some of the highest inflation rates in the 27-nation European Union and people are struggling to buy food or fill their fuel tanks.

A butcher at Budapest food market Ildiko Vardos Serfozo said she’s seen a drop in business as customers head to multinational grocery chains that can offer discounts by buying in large wholesale quantities.

“Buyers are price sensitive and therefore often leave us behind, even if our products are high quality. Money talks,” she said. “We notice that inflation is not good for us. … I’m just glad my kids don’t want to continue this family business. I don’t see much future in it.”

In nearby Poland, Barbara Grotowska, a 71-year-old pensioner, said outside a discount supermarket in the capital of Warsaw that she’s been hit hardest by her garbage collection fee nearly tripling to 88 zlotys ($21). She also lamented that the cooking oil she uses has gone up by a third of its price, to 10 zlotys ($2.40).

“That’s a real difference,” she said.

The recent pickup in inflation has caught business leaders and economists around the world by surprise.

In the spring of 2020, the coronavirus crushed the global economy: governments ordered lockdowns, businesses closed or slashed hours and families stayed home. Companies braced for the worst, canceling orders and putting off investments.

In an attempt to stave off economic catastrophe, wealthy countries — most notably the United States — introduced trillions of dollars’ worth of government aid, an economic mobilization on a scale unseen since World War II. Central banks also slashed interest rates in a bid to revive economic activity.

But those efforts to jump-start economies have had unintended consequences: As consumers felt more emboldened to spend the money they had received through government assistance or low-interest borrowing, and vaccine rollouts encouraged people to return to restaurants, bars and shops, the surge in demand tested the capacity of suppliers to keep pace.

Ports and freight yards suddenly were clogged with shipments, and prices began to rise as global supply chains seized up — especially as new outbreaks of COVID-19 sometimes shut down factories and ports in Asia.

The rise in prices has been dramatic. The International Monetary Fund predicts that world consumer prices will rise 4.3% this year, the biggest jump since 2011.

It is most pronounced in the developing economies of central and Eastern Europe, with the highest annual rates recorded in Lithuania (8.2%), Estonia (6.8%) and Hungary (6.6%). In Poland, one of Europe’s fastest growing economies, inflation came in at 6.4% in October, the highest rate in two decades.

Several shoppers at a vegetable stand in Warsaw said they are anxious about rising prices for staples such as bread and cooking oil and are expecting the situation to get worse in the new year, when energy prices are set to rise.

Piotr Molak, 44, a vegetable vendor, said he has not yet had to raise prices on the potatoes, apples or carrots he sells but the cherry tomatoes he imports from Spain and Italy, which he buys in euros, have gotten far more expensive as Poland’s currency, the zloty, has weakened.

“We will mostly feel this in the new year when electricity goes up,” Molak said. “We are really going to feel it when we have to spend more on our home than on pleasure.”

The weakening of currencies across central and Eastern Europe against the U.S. dollar and euro is pushing up the price of imports and fuel and exacerbating the pinch from supply backups and other factors.

Hungary’s currency, the forint, has lost around 16% of its value against the dollar in the past six months and slipped to a historic low against the euro last week. That’s part of a strategy by Hungary’s central bank to keep the country competitive and attract foreign companies seeking cheap labor, said Zsolt Balassi, a portfolio manager at Hold Asset Management in Budapest.

But prices on imported goods have skyrocketed, and global oil prices set in U.S. dollars have pushed fuel costs to record levels.

“As the Hungarian forint, and actually all regional currencies, are more or less constantly weakening, this will constantly raise oil prices in our currencies,” Balassi said. 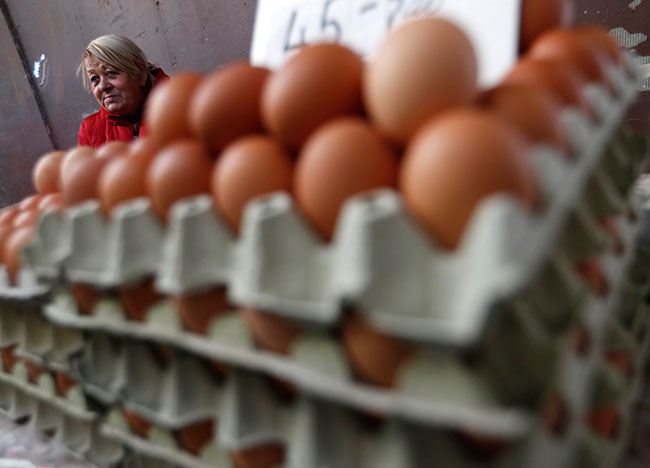 While giving some relief, Hungary’s upcoming elections, in which the right-wing governing party faces the most serious challenge since it was elected in 2010, likely were a factor, Balassi said.

“This is obviously a political decision which has huge economic disadvantages, but probably it makes the households happy,” he said.

The political nature of some economic decisions is not limited to Hungary.

Poland’s central bank, also facing a weakening currency, has been accused by critics of allowing inflation to rise too high for too long to encourage economic growth and bolster support for the ruling party.

The bank surprised markets with the timing and size of two base interest rate hikes in October and November in a bid to ease prices, while Hungary’s central bank has raised rates in smaller increments six times this year.

Still, if central banks move too aggressively too soon to control inflation, it could short-circuit the economic recovery, said Carmen Reinhart, chief economist at the World Bank.

She worries about higher food prices that primarily hurt the poor in developing countries, where a disproportionate share of family budgets goes toward keeping food on the table.

“Food prices are a barometer for social unrest,’’ Reinhart said, noting that the Arab Spring uprisings that began in 2010 were caused partly by higher food prices.

Anna Andrzejczak, 41, who works for an environmental foundation in Poland, was a child when communism ended there in 1989 and has only a vague memory of the hyperinflation and other economic “tumult” that came with the transition to a market economy.

But she feels the prices going up “every time I fill my tank,” with fuel costs having risen some 35% in the last year.

“We’ve had a period of stability in past years, so this inflation now is a big shock,” Andrzejczak said. “We don’t have the price increases that we had then, but I think this will cause big stress.”

Consumer Prices Surged in Past Year the Most Since 2008