Inflation Hit 8.3% in April but Slows From 40-Year High 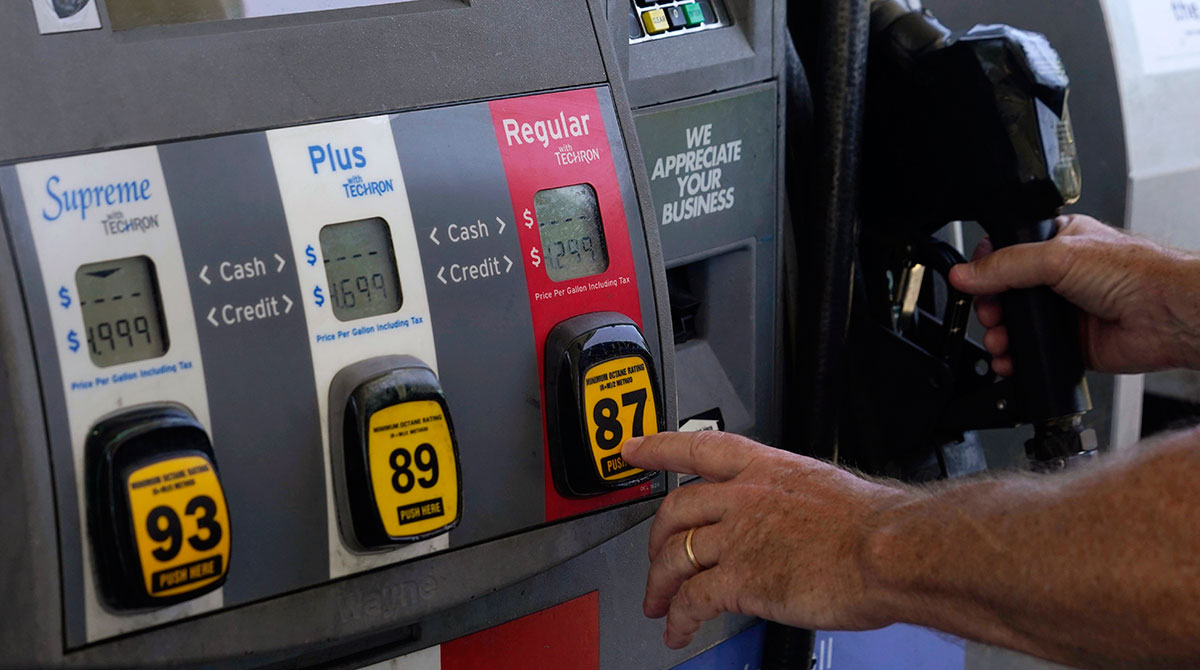 A customer pumps gas at an Exxon gas station on May 10 in Miami. (Marta Lavandier/AP)

WASHINGTON — Inflation slowed in April after seven months of relentless gains, a tentative sign that price increases may be peaking while still imposing a financial strain on American households.

Consumer prices jumped 8.3% last month from 12 months earlier, the Labor Department said May 11. That was below the 8.5% year-over-year surge in March, which was the highest rate since 1981.

On a month-to-month basis, prices rose 0.3% from March to April, a still-elevated rate but the smallest increase in eight months. Consumer prices had spiked 1.2% from February to March, mostly because of a sudden jump in gas prices triggered by Russia’s invasion of Ukraine.

Nationally, the price of a gallon of regular gas has reached a record $4.40, according to AAA, though that figure isn’t adjusted for inflation. The high price of oil is the main factor. A barrel of U.S. benchmark crude sold for around $100 a barrel May 10. Gas had fallen to about $4.10 a gallon in April, after reaching $4.32 in March.

Beyond the financial strain for households, inflation is posing a serious political problem for President Joe Biden and congressional Democrats in the midterm election season, with Republicans arguing that Biden’s $1.9 trillion financial support package last March overheated the economy by flooding it with stimulus checks, enhanced unemployment aid and child tax credit payments.

On May 10, Biden sought to take the initiative and declared inflation “the No. 1 problem facing families today” and “my top domestic priority.”

Biden blamed chronic supply chain snarls related to the swift economic rebound from the pandemic, as well as Russia’s invasion of Ukraine, for igniting inflation. He said his administration will help ease price increases by shrinking the government’s budget deficit and by fostering competition in industries, like meatpacking, that are dominated by a few industry giants.

Still, new disruptions overseas or other unforeseen problems could always send U.S. inflation back up to new highs. If the European Union decides, for example, to cut off Russian oil, gas prices in the United States would likely accelerate. China’s COVID lockdowns are worsening supply problems and hurting growth in the world’s second-biggest economy.

Previous signs that U.S. inflation might be peaking didn’t last. Price increases decelerated last August and September, suggesting at the time that higher inflation might be temporary, as many economists — and officials at the Federal Reserve — had suggested. But prices shot up again in October, prompting Fed Chair Jerome Powell to start shifting policy toward higher rates.

This time, though, several factors are pointing to an inflation peak. Natural gas prices, which soared in March after Russia’s invasion of Ukraine, fell on average in April and likely slowed inflation. Used car prices are also expected to have dropped last month. Automakers’ supply chains have unraveled a bit, and new car sales have risen.

While food and energy have endured some the worst price spikes of the past year, analysts often monitor the core figure to get a sense of underlying inflation. Core inflation also typically rises more slowly than the overall price increases and can take longer to decline. Rents, for example, are rising at a historically fast pace, and there is little sign of that trend reversing anytime soon.

The unexpected persistence of high inflation has caused the Fed to embark on what may become its fastest series of interest rate increases in 33 years. Last week, the Fed raised its benchmark short-term rate by a half-point, its steepest increase in two decades. And Powell signaled that more such sharp rate hikes are coming.

The Powell Fed is seeking to pull off the notoriously difficult — and risky — task of cooling the economy enough to slow inflation without causing a recession. Economists say such an outcome is possible but unlikely with inflation this high.

In the meantime, by some measures Americans’ wages are rising at the fastest pace in 20 years. Their higher pay enables more people to at least partly keep up with higher prices. But employers typically respond by charging customers more to cover their higher labor costs, which, in turn, heightens inflationary pressures.

The May 6 jobs report for April included data on hourly pay that suggested that wage gains were slowing, which, if it continues, could help ease inflation this year.