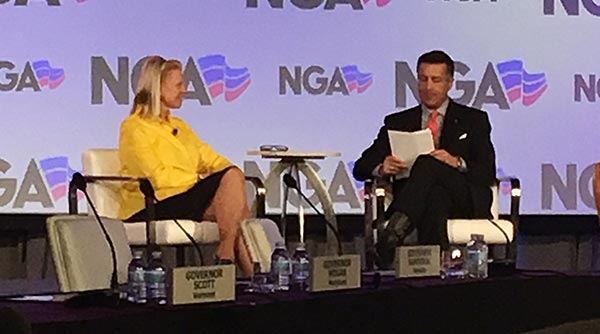 WASHINGTON — Blockchain’s effects will extend to transportation and facilitate the movement of goods, according to IBM Chairman Ginni Rometty.

Rometty, who spoke at the National Governors Association’s winter meeting Feb. 25, said the distributed database system will do for transactions what the internet did for information. She said blockchain will especially come in handy for cargo shippers, who will be able to spend less time and manpower on the verification of business records.

MORE FROM NGA: Agriculture industry eager for action on infrastructure

“Every place you have transactions, you could get a very fast middleman out of the way. It is shipping. Shipping, shipping, shipping,” Rometty said. “For cargo, you know those containers we all see? Often the paperwork costs more than what’s inside of it. With blockchain, you’re able to get rid of all of that. Then you go to rail, to the truck [and] everything along the way. You’re going to find blockchain’s going to plow its way right through that. It’s a great efficiency play.”

Blockchain is frequently buzzed about in business discussions, although many struggle to fully understand it, including several of the governors assembled at the conference. Nevada Gov. Brian Sandoval, who also serves as NGA chair, was the first to admit he needed a “blockchain for dummies” refresher.

Blockchain discussion begins at the 37:30 mark in the video below

Rometty compared blockchain to a general ledger, the kind that would be maintained by two parties who had just completed a business transaction. Blockchain is a “distributed ledger,” meaning that it provides records of business transactions throughout an item’s entire journey, such as when a vegetable is plucked from the ground up until the point where it is placed on a retailer’s shelf.

Unlike Wikipedia, blockchain is not anonymous. Every company using the service knows who else is using it, and Rometty pointed out that competing companies are oftentimes members of the same blockchain. The records on the database cannot be tampered with, and any changes to the information presented in the database must be made with the consent of all participants.

“It’s immutable. It cannot be changed,” Rometty said. ”I believe blockchain is going to be not only disruptive, but beneficial.”

Some members of the freight industry are starting to accept blockchain. BNSF Railway Co. announced Feb. 5 that it joined the Blockchain in Transport Alliance, a group of more than 200 freight and logistics companies that are exploring how to use the digital-ledger technology in their industry.

Blockchain and artificial intelligence were highlights of Rometty’s remarks, delivered during a session focused on innovation.

Innovation is a hallmark of Sandoval’s agenda. About six months ago, he launched Ahead of the Curve, an initiative for governors to embrace technological innovation, particularly in the energy and transportation sectors. The goal is to help states modernize their regulatory processes, educate their workforce, update data systems and defend against cyber threats.

“We’ve seen firsthand how technologies are transforming our daily way of life, from how we heat and cool our buildings to the cars we drive or the cars that drive themselves,” Sandoval said.

Fascinating conversation with @IBM CEO @GinniRometty on the limitless future of technology as part of the @NatlGovsAssoc winter meeting.