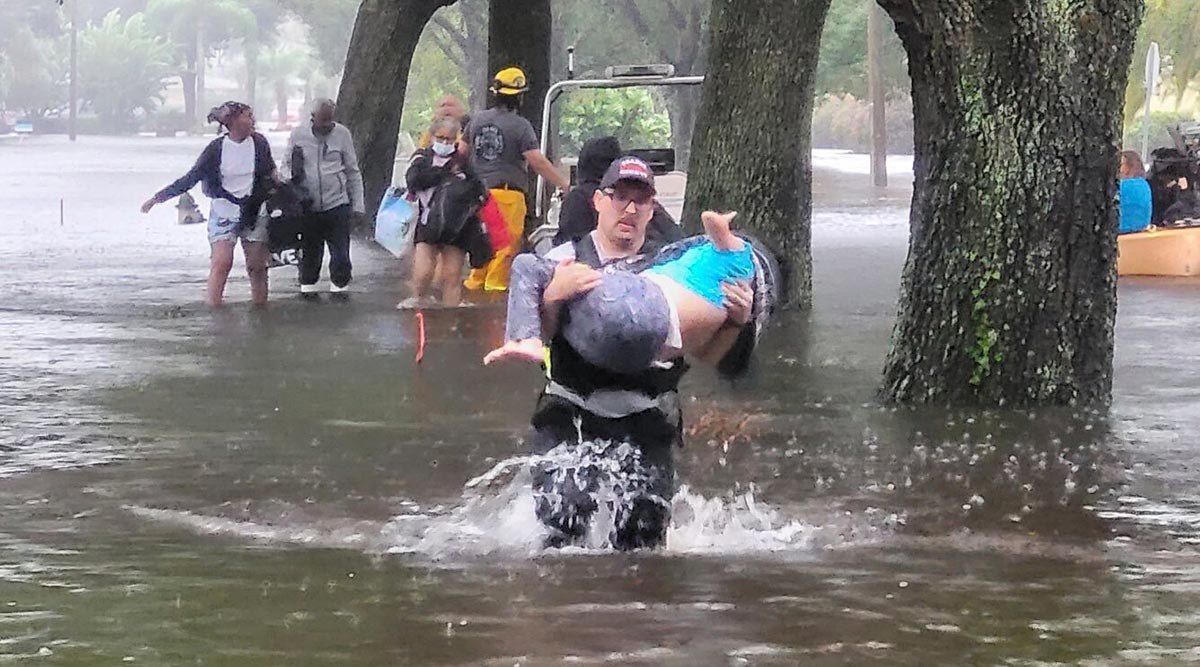 Floodwaters rose waist-high near Orlando, far inland, as one of the strongest hurricanes to ever hit the United States crossed the peninsula. Ian’s tropical-storm-force winds extended outward up to 415 miles, drenching much of Florida and the southeastern Atlantic coast.

“It crushed us,” Lee County Sheriff Carmine Marceno told ABC’s “Good Morning America.” He said roads and bridges remained impassable, stranding thousands in the county where Ian made landfall just north of Fort Myers. “We still cannot access many of the people that are in need.”

Authorities confirmed at least one storm death in Florida — a 72-year-old man in Deltona who fell into a canal while using a hose to drain his pool in the heavy rain, the Volusia County Sheriff’s Office said. Two people died in Cuba after Ian struck there.

Marceno said that while he lacked any details, he believed the death toll would be “in the hundreds.” Gov. Ron DeSantis later said that toll was not confirmed and was likely an estimate based on 911 calls.

“The Coast Guard had people who were in their attics and got saved off their rooftops,” DeSantis said. “We’ve never seen storm surge of this magnitude ... The amount of water that’s been rising, and will likely continue to rise today even as the storm is passing, is basically a 500-year flooding event.”

A chunk of the Sanibel Causeway fell into the sea, cutting off access to the barrier island where 6,300 people normally live. How many heeded mandatory evacuation orders before the storm surge washed over the island wasn’t known.

South of Sanibel, towering waves destroyed the historic beachfront pier in Naples, tearing out even the pilings underneath. “Right now, there is no pier,” said Penny Taylor, a commissioner in Collier County, which includes Naples. 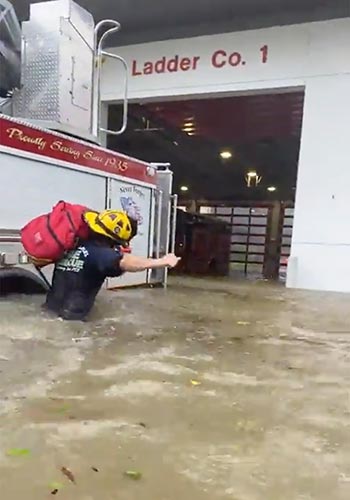 Emergency crews sawed through toppled trees to reach flooded homes, but with no electricity and virtually no cell service, it was impossible for many people to call for help when the surge filled their living rooms.

“Portable towers are on the way for cell service. Chances are your loved ones do not have ability to contact you,” said the sheriff’s office in Collier County, which includes Naples. “We can tell you as daylight reveals the aftermath, it’s going to be a hard day.”

In Fort Myers, Valerie Bartley was terrified as her family spent desperate hours holding a dining room table against their patio door as debris slammed into their house.

“We just assumed that it was tearing our house apart,” she said. As the storm raged outside, she said her 4-year-old daughter grabbed her hand and said: “I’m scared too, but it’s going to be OK.”

Ian made landfall Sept. 28 near Cayo Costa, a barrier island just west of heavily populated Fort Myers, as a Category 4 hurricane with 150 mph winds, tying it for the fifth-strongest hurricane, when measured by wind speed, ever to strike the U.S.

Ian’s center came ashore more than 100 miles south of Tampa and St. Petersburg, sparing them their first direct hit by a major hurricane since 1921. Water drained from Tampa Bay as it approached, then returned with a surge.

The National Hurricane Center said Ian was expected to regain near-hurricane strength after emerging over Atlantic waters near the Kennedy Space Center, with South Carolina in its sights for a second U.S. landfall.

Meanwhile, a stretch of the state remained under as much as 10 feet of water the morning of Sept. 29, with destructive waves “ongoing along the southwest Florida coastline from Englewood to Bonita Beach, including Charlotte Harbor,” the center said.

In Port Charlotte, a hospital’s emergency room flooded and fierce winds ripped away part of the roof, sending water gushing down into the intensive care unit. The sickest patients — some on ventilators — were crowded into the middle two floors as the staff prepared for storm victims to arrive, said Dr. Birgit Bodine of HCA Florida Fawcett Hospital. 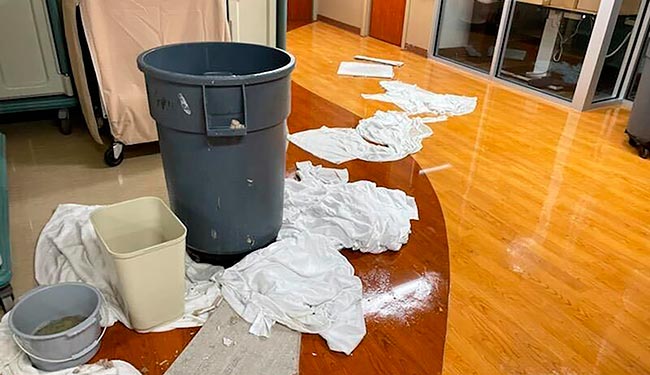 NASA’s Kennedy Space Center remained closed and off-limits, except for a small ride-out team that spent the night there. SpaceX’s next astronaut launch to the International Space Station, meanwhile, was delayed until at least Oct. 5, two days late because of Ian.

Ocean waters were receding after a storm surge brought destructive waves to downtown areas from Englewood to Bonita Beach, including Charlotte Harbor and Fort Myers. Cities from Orlando to Daytona Beach in northwest Florida got their turn for severe flooding before Ian moved out to sea.

Paramedics rolled residents out of the Avante Orlando nursing home on stretchers and wheelchairs through floodwaters to ambulances and waiting buses Sept. 29. A hospital system in southwest Florida was evacuating at least 1,200 patients for lack of safe drinking water.

Filling stations were shut Sept. 29 along Interstate 75 south of Tampa, leaving drivers with few options for obtaining gasoline or diesel.

About a third of the Tampa area was without power and the extent of outages worsened in counties further south that took direct hits from the monster storm. Gas stations and convenience stories cannot dispense fuel without electricity to run pumps.

Trucks hauling water-removal equipment and crews headed south on I-75 from Tampa toward the hardest-hit areas in places like Fort Myers, as did a flatbed stacked with portable toilets.

The Florida Highway Patrol shut down the Florida Turnpike in the Orlando area due to significant flooding and said the main artery in the middle of the state will remain closed until water subsides.

Calls from people trapped in flooded homes or from worried relatives clogged 911 lines. Pleas were also posted on social media sites, some with video showing debris-covered water sloshing toward the eaves of their homes.

Brittany Hailer, a journalist in Pittsburgh, contacted rescuers about her mother in North Fort Myers, whose home was swamped by 5 feet of water.

“We don’t know when the water’s going to go down. We don’t know how they’re going to leave, their cars are totaled,” Hailer said. “Her only way out is on a boat.”

The storm previously killed two people in Cuba, and brought down the country’s electrical grid.

A hurricane warning is in effect for the South Carolina coast. #Ian is over the Atlantic and will strengthen again to hurricane status before making landfall Friday. Surge, flooding rain, damaging wind all ahead. Keep tuning in to @weatherchannel for updates and live coverage. pic.twitter.com/bp8G8UB0EL — Jacqui Jeras (@JacquiJerasTV) September 29, 2022

“I am enacting this curfew as a means of protecting the people and property of Charlotte County,” Prummell said.

At 8 a.m. Sept. 29, the storm was about 40 miles east of Orlando and 10 miles southwest of Cape Canaveral, carrying maximum sustained winds of 65 mph and moving toward the cape at 8 mph, the center said. 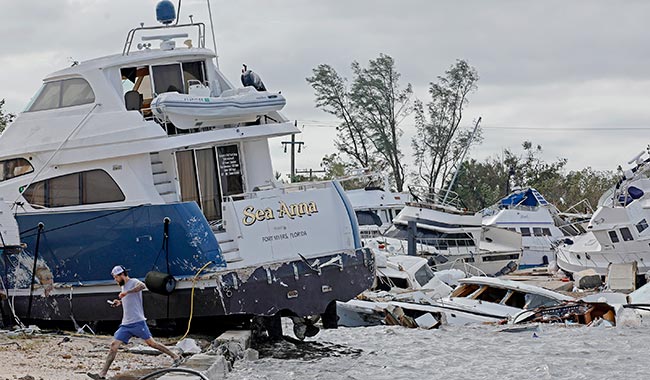 Up to a foot of rain was forecast for parts of Northeast Florida, coastal Georgia and the Lowcountry of South Carolina. As much as 6 inches could fall in southern Virginia as the storm moves inland over the Carolinas, and the center said landslides were possible in the southern Appalachian mountains.

The governors of South Carolina, North Carolina, Georgia and Virginia all preemptively declared states of emergency.