I-15 Reopens in Both Directions Amid Spreading California Wildfire 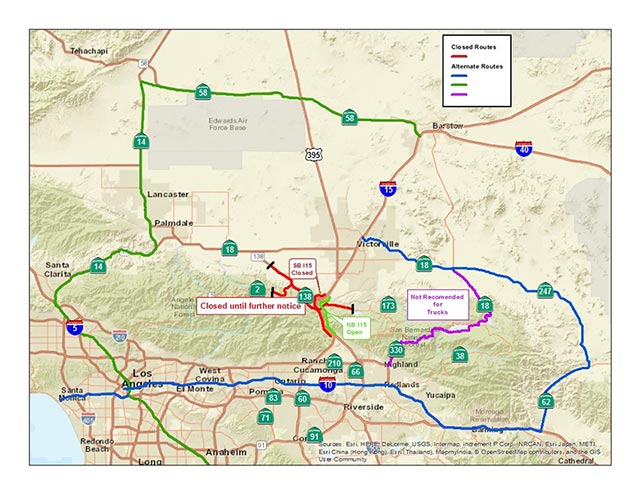 After being shut for 36 hours because of the Bluecut wildfire that has been engulfing part of the area around San Bernadino, Interstate 15 southbound reopened at 10:45 A.M. on Aug. 18. The interstate opened in the northbound direction through the Cajon Pass on the night of Aug. 17. Caltrans announced that I-215, whose intersection with I-15 marked the start of the 18-mile closure, re-opened in the same direction. However, as guardrail and other repairs continued, I-15 southbound remained closed.

More than 5,000 trucks a day use that stretch of I-15 from I-1215 in Devore to Ranchero Road in Hesperia that had caused “big detours” of up to 100 miles, California Trucking Association CEO Shawn Yadon said.

“That is the only major access route for commuters and trucks,” Caltrans spokeswoman Terri Kansinga agreed.

Traffic flows on northbound I15 in the Cajon Pass, no ETA on southbound. #BluecutFire still 25,626 acres @MyDesert pic.twitter.com/sRoxGnqlV2