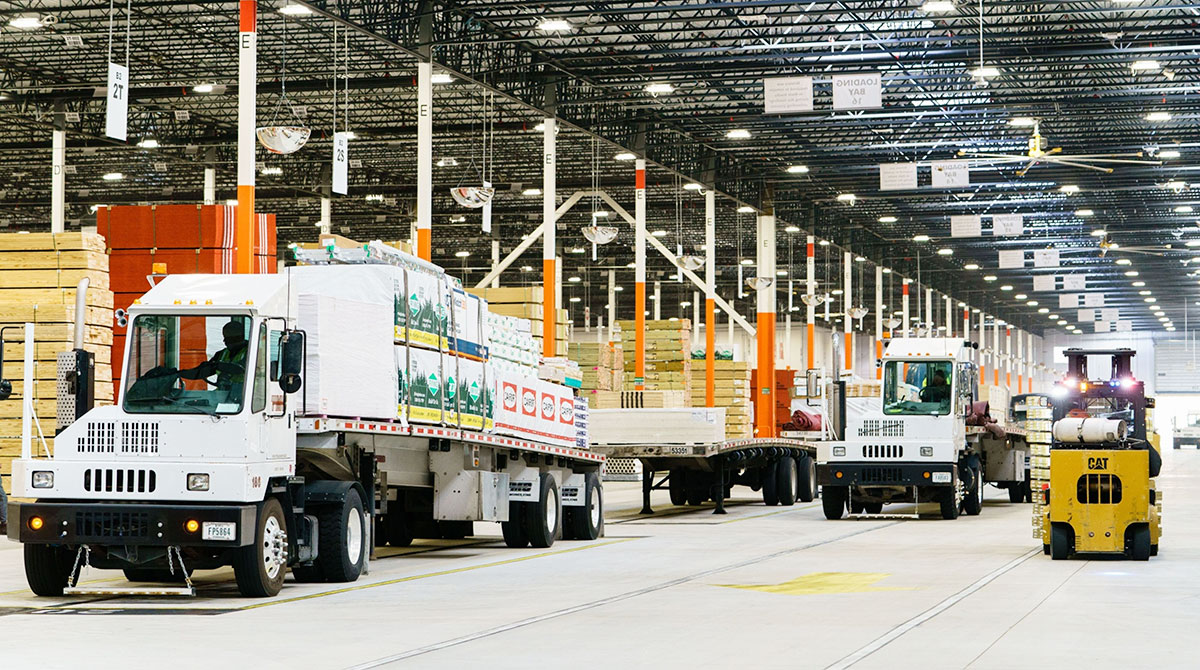 A driver prepares to pull a flatbed trailer out of a Home Depot Flatbed Distribution Center in Lithonia, Ga. (Elijah Louvelage/Bloomberg)

Inside an expansive and noisy distribution center just east of Atlanta, Home Depot Inc. is trying to solve a problem that’s plaguing its stores: large orders from pro shoppers.

Contractors’ needs are very different than the average customer’s, and while they make up only 5% of Home Depot’s shoppers, they account for 45% of its $132 billion in annual sales. They often buy bulky items in vast quantities and want — or rather demand — to receive the orders on a stringent timeline. That’s become an especially intense problem for Home Depot, as with other retailers, amid the supply chain crunch that’s upended stocking and transport around the country and the world.

The new facility in Stonecrest, Ga., which is called a flatbed distribution center, is designed with contractors in mind. During a recent visit, workers ferried goods around on red Raymond pacers and yellow Caterpillar forklifts. Stacks of plywood were piled up toward the ceiling and copper pipes sat atop high shelves. Large bags of mulch and potting mix were a prominent reminder that spring renovation season is on the horizon.

The hub is the centerpiece of Home Depot’s plan to ease the complexity of direct-to-consumer sales — and win market share from both its main rival, Lowe’s Cos., and independent distributors. With growth from the do-it-yourself crowd now being outpaced by sales to contractors, the stakes are high to get it right. 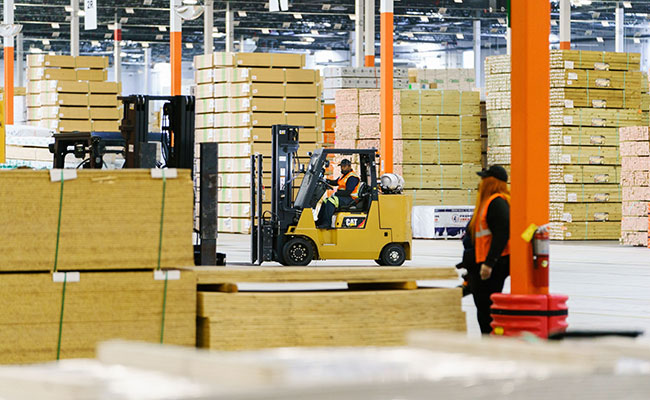 Investors are betting on continued success for both Home Depot and Lowe’s, having sent their shares up more than 50% this year, well ahead of the 22% rise of the S&P 500 index. Home Depot’s market capitalization of $426 billion is more than $40 billion higher than that of Walmart Inc., despite the discount giant’s much greater revenue.

Home Depot has built similar distribution facilities in major markets such as Dallas, Baltimore and Miami and more are coming. It’s part of $1.2 billion of investment over five years on supply chain improvements that started well before the COVID pandemic roiled the world’s shipping markets. The company is betting that if it can keep contractors happy, other customers will follow.

Additionally, funneling the direct-to-contractor business to the facilities is meant to simplify store operations. The strategy contrasts with those of retailers such as Walmart and Kohl’s Corp., which increasingly see their stores doubling as fulfillment centers.

In Home Depot’s Georgia hub, most orders move in and out on flatbed trucks, with merchandise heading to stores or job sites up to 200 miles away. The Georgia center is also located on a rail line, so boxcars carrying as much as four times what a flatbed truck can hold arrive directly.

Prior to these distribution centers, orders for professionals were mostly filled from stores. This depleted inventory and put pressure on workers. Sometimes, purchases would have to be completed from two or three different stores, meaning that different parts of the order could arrive on different days, much to the chagrin of backlogged contractors.

With the flatbed facilities, Home Depot is betting it can control last-mile delivery to earn its pro shoppers’ trust. Stephanie Smith, senior vice president of supply chain, said the centers aim to carry everything that a contractor might need. If Home Depot meets that goal, it expects broader success to follow, she added.

“In our history as a company, if we develop something for our contractor pro customers and get it right, then it really generally works well for our DIY customers as well,” Smith said in an interview.

The initiative was well-timed. As retailers struggle to adjust to widespread logjams, Home Depot is well into its overhaul. After the investment is fully deployed, Home Depot will have around 150 distribution facilities in its network. About 30 to 35 of those will be flatbed distribution centers.

“Thank goodness we had already started building this out,” Smith said.

Last year, rival Lowe’s Cos. rolled out its own plans to upgrade its supply chain and target contractors. The Mooresville, N.C.,-based company also wants to shift delivery of large products away from stores and is opening dozens of facilities to make this possible. These include bulk distribution centers and holding facilities on the East and West Coasts.

The new delivery model opens up space in the company’s stockrooms, “which allows us to expand our parcel store fulfillment network while also expanding our same-day and next-day pro and DIY fulfillment capabilities,” Lowe’s said.

While a larger share of Home Depot’s business generally comes from pro shoppers than at Lowe’s, that market is more fragmented than the DIY one.

Before Covid, Home Depot said it would spend $1.2 billion to revamp its supply chain. This week, I toured one of the distribution centers it has designed to win over the ever-important contractor shopper. The timing, it seems, couldn’t have been better https://t.co/l4zJCN08cp

The investment in its supply chain is one of the biggest initiatives Home Depot has taken on since building out HD Supply in the early 2000s, said Keith Hughes, managing director of equity research at Truist Securities Inc. Home Depot in 2020 agreed to purchase its former subsidiary — a distributor of maintenance, repair and operations products — more than a decade after they had split.

The challenge, Hughes added, is that there’s no single solution to meeting the needs of contractors, whose work ranges from lawn and landscaping to drywall and demolition.

“I think one area where Home Depot has struggled is with time delivery,” Hughes said. “There are all these little idiosyncratic things you have to do around the pro that is very job-specific or trade-specific. The cookie-cutter approach doesn’t always deal with it.”

Smith said that since the flatbed facilities have opened in other markets, the company has been able to notch better on-time and complete orders. And the relieved pressure on store employees lets them “focus on the customers that are shopping there — and that’s a better experience for them as well.”