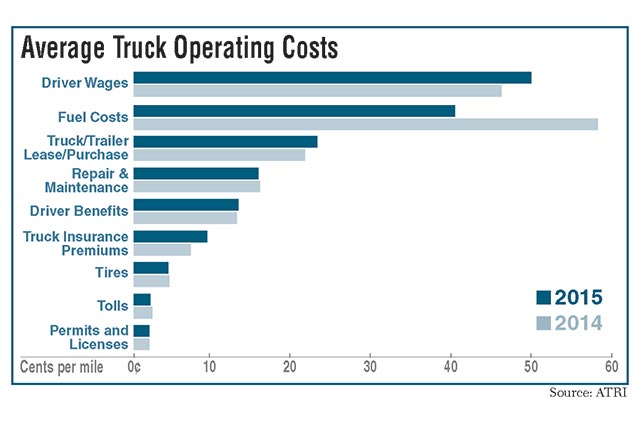 This story appears in the Oct. 3 print edition of Transport Topics.

Trucking’s operational costs fell 6% per mile last year, on a year-over-year basis, helped by a 31% drop in fuel prices that outweighed the highest-ever driver pay as well as increased insurance and truck payment expenses.

Those findings were in a new survey by the American Transportation Research Institute, the research arm of American Trucking Associations. It also showed that the average per-mile operating cost was $1.593, down 11 cents from its 2014 survey.

For the first time since the study began in 2008, driver pay was the largest cost, accounting for 31% of total expenses at 49.9 cents per mile. That surpassed fuel, which finished at 25%, or 40.3 cents per mile — the lowest percentage since the cost study started. Fuel figures exclude surcharges.

Repair and maintenance costs were little changed at 15.6 cents per mile. So were costs for tires, permits and licenses, and tolls.

“Despite an overall decline of 6% in a carrier’s cost per mile, it is highly likely that this trend will not continue,” the report said. “Given the potential increase in fuel prices, coupled with continuing increases in driver pay and benefits, carriers are likely to see increases in operational costs in the coming year. The driver shortage is expected to continue to grow in the face of an aging workforce and increased demand for freight.”

Factors such as a persistent driver shortage, an aging driver corps and the potential attractiveness of jobs in other industries, such as housing, were mentioned as factors that drove up driver pay, with a year-over-year increase of about 8%.

Studies by the National Transportation Institute, which monitors truckload driver pay at more than 350 fleets, found that pay increases peaked in 2014, continued last year and have virtually ended this year as freight demand slowed, easing the need for drivers.

“The combined impact of these forces in the industry will likely continue to result in increased driver wage and benefit costs as fleets strive to keep their experienced workforce and recruit additional drivers,” ATRI said.

“Insurance increases, often occurring at the same time that truck-involved crashes declined, are due to numerous and complex factors, including market/economic corrections, losses in the reinsurance industry and escalating legal/jury/settlement costs,” the report noted.

ATRI said the maintenance costs that account for 10% of fleets’ expenses reflected the combination of an aging truck fleet and fewer miles driven.

Fleetwide fuel efficiency, a new survey question, was 6.3 mpg, which ATRI said was in line with data compiled by ATA’s Technology & Maintenance Council for 2011 and 2014 model year tractors.

A total of 63% of respondents reported that they used electronic logging devices, the same percentage as in the previous study.

Despite two years of strong truck sales, the survey respondents reported keeping tractors for seven years, longer than the 6.7 years in the prior-year survey. The trade cycle mileage dropped to 720,000 from 730,000, reflecting economic conditions, the report said.

Nearly 70% of survey respondents ran truckload freight, while 21% were less-than-truckload. The rest were specialized.

“ATRI’s ‘ops cost’ research is an excellent barometer of the state of the nation’s economy, as it documented the softening in 2015 but also indicates that costs will be on the rise in 2016,” said Bob Costello, ATA’s chief economist.