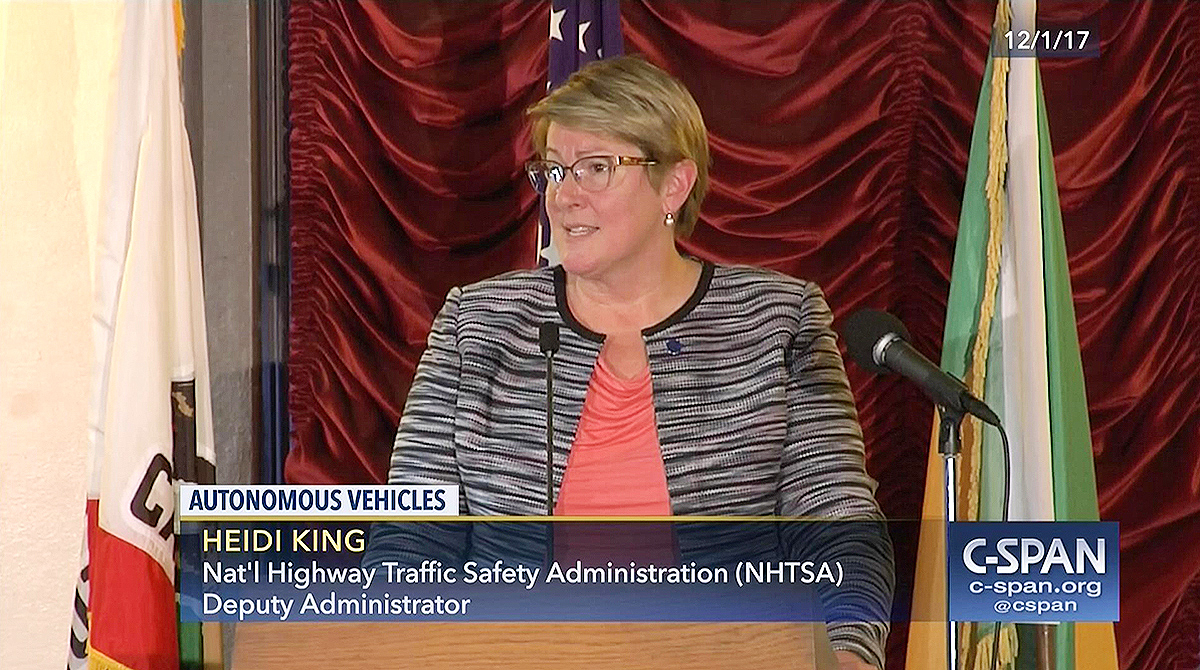 This is the second time the White House has put forth King’s name to lead the safety agency; she was also nominated to the post during the last Congress. While it appeared the previous Senate might consider her nomination — last summer, the Republican-led Senate Commerce Committee advanced her nomination to the floor by a vote of 14-13 — that nomination expired once the last Congress adjourned.

King is NHTSA’s deputy administrator. Her government tenure has included a stint as a regulatory policy analyst at the Office of Management and Budget, and she also previously served as chief economist at the House Energy and Commerce Committee. In private industry, King worked for Pfizer Inc. and General Electric, according to background she had provided the Senate Commerce Committee.

Last summer, the Republican-led Commerce panel advanced her nomination to the floor by a vote of 14-13.

President Trump also renominated Diana Furchtgott-Roth to become assistant secretary of transportation, a new position, and also advanced Thelma Drake to the top leadership post at the Federal Transit Administration. Both had also been nominated in the last Congress.

Drake, formerly a congresswoman, oversaw transportation programs during her time in the Virginia state government. The Washington Metropolitan Transit Authority, which oversees the area’s subway system, and the Virginia Railway Express are listed as agencies where she gained experience. Last year the Senate Banking, Housing and Urban Affairs Committee approved her nomination, but full Senate didn’t vote on it. At her confirmation hearing at the time, Drake said that, if confirmed, her priorities would include, “the safety of our transit systems and the traveling public … infrastructure support and investment … preparing for the future through innovation.”

Also earning renominations were Michelle Schultz to become a member of the Surface Transportation Board and Joseph Ryan Gruters, Leon Westmoreland and Rick Dearborn to become members of Amtrak’s board of directors.

“In an effort to exercise oversight more effectively and develop policy in the many agencies and departments covered by Commerce’s broad jurisdiction, the six subcommittees have been reconfigured,” Wicker explained. “For example, the new Subcommittee on Security will address the intersection of economic and national security. I look forward to working with all of the chairmen on the committee’s agenda for the 116th Congress.”

New Commerce Committee ranking member, Sen. Maria Cantwell (D-Wash.), emphasized that the committee “has had a long record of working together in bipartisan fashion.”

Estimated Roadway Fatalities Up 18.4% for First Half of 2021