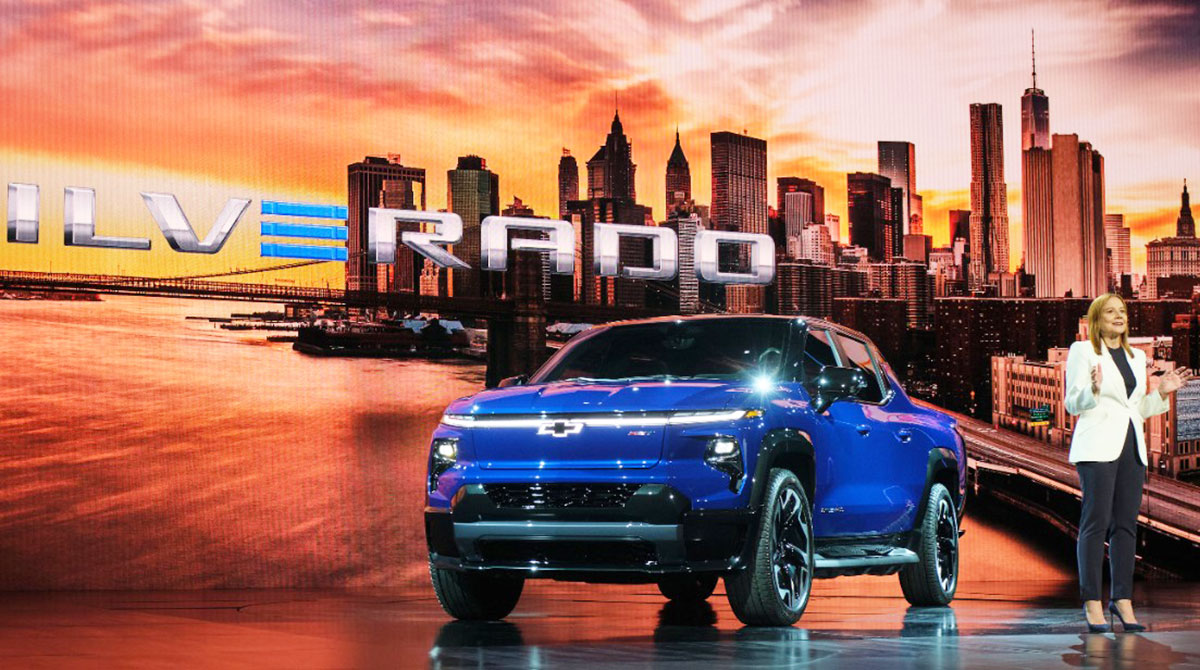 General Motors Co. CEO Mary Barra showed off the company’s electric Chevrolet Silverado at the CES exhibition, announcing that the pickup will go on sale in spring 2023 to compete with battery-powered trucks from longstanding rival Ford Motor Co. and newcomer Rivian Automotive Inc.

The Silverado will trail Ford’s F-150 Lightning to market by a year, but GM says its pickup will have more range and greater towing power. The automaker will offer a commercial version of the truck and one for retail customers called the RST. Both will go 400 miles on a charge, easily beating the Ford and Rivian R1T trucks.

The EV battle will bring pickups into a new age, where the fight will extend to range, as well as the usual bragging rights over horsepower and how much truck each can tow and haul.

GM and Ford took different routes to market with their pickups. Ford shoehorned a battery into the frame of its existing F-150 truck to go on sale sooner. GM developed its Ultium battery pack first, so the company could make a vehicle with greater range.

“This is a purpose-built Silverado EV,” Barra said at the press event.

The @Chevrolet #SilveradoEV was built to be much more than a truck. Explore the latest addition to our Ultium-powered EV lineup, available fall 2023: https://t.co/sjNIj1oJde #GMUltiumEffect pic.twitter.com/rNViesp17O

GM developed the truck using the battery pack and the platform that it’s using for the Hummer EV pickup that went into production in late 2021. It was modified to make the Silverado more of a work truck than the Hummer. Both will be built at GM’s Detroit-Hamtramck plant, which is called Factory Zero.

“We started ground up with the truck so we can design it with the winning formula for customer requirements,” Steve Carlyle, the president of GM-North America, said in an interview.

GM’s Silverado will start at just under $40,000, slightly more than the Lightning’s $38,705. Rivian’s pickup, which starts at more than $67,000, and GM’s even pricier Hummer electric pickup appeal to customers who are more interested in style or going off-road than using their vehicle on the job site.

Ford’s jump on GM has been met with enthusiasm by consumers. Ford has said it will double Lighting production and plans to sell 600,000 EVs a year by 2024.

GM will offer Silverado versions as expensive as $80,000.

When it first goes on sale, the Silverado work truck will be able to tow 8,000 pounds. That’s less than the existing Chevy pickups that run on gasoline and diesel. It’s also less than the Lightning’s 10,000 pounds.

Some time after launch, Chevy will offer a work truck that can tow 20,000 pounds. That’s more than the company’s Silverado 2500 light duty pickup. To tow more, a buyer would need to get a Chevy medium-duty truck.

At the press event, Barra also provided details about electric versions of the Chevrolet Equinox and Blazer crossover SUVs, saying that both will go on sale next year to offer EVs in the $30,000 price range. It’s part of GM’s “Everybody In” campaign to show that it will sell electric vehicles for every kind of buyer.

“Compact crossovers are an enormous segment,” Carlyle said. “We’re going to cover that $30,000 price point with a compelling package. You need to cover all the important segments.”

In addition, FedEx is working on a plan to add up to 20,000 more in the years to follow, subject to further negotiations and execution of a definitive purchase agreement, GM said.