Global Markets Pick Up After Plunge on Coronavirus, Oil 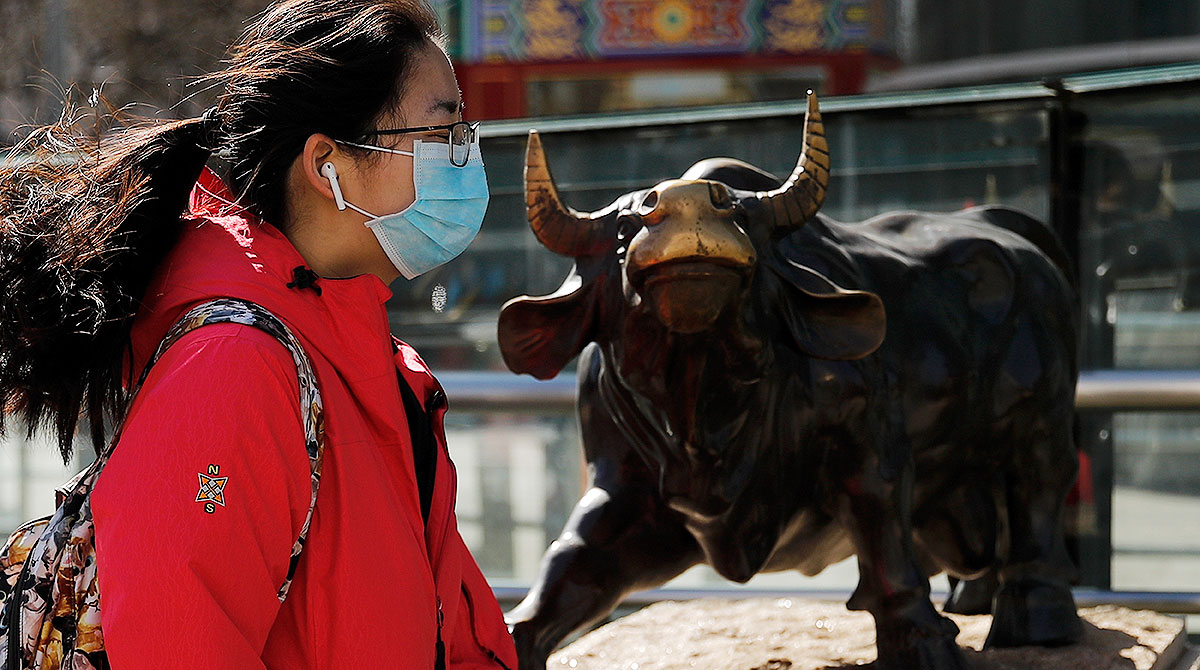 A woman wearing a face mask walks by the investment icon bull statue on display outside a bank in Beijing on March 10. (Andy Wong/AP)

BEIJING — Global stock markets rebounded March 10 from record-setting declines after U.S. President Donald Trump said he would ask Congress for a tax cut and other measures to ease the pain of the spreading coronavirus outbreak.

Oil prices also recovered some of their losses in the stunning March 9 plunge.

European indexes, many of which suffered their biggest one-day drop since the 2008 global crisis on March 9 and fell into a bear market, were up by more than 3%. China’s main stock index closed 1.8% higher and Tokyo rose 0.9%.

Wall Street is likewise expected to recover somewhat from its largest daily drop in 12 years, with futures for the benchmark S&P 500 and for the Dow Jones Industrial Average both up by 4.2%.

The global selloff reflected alarm over economic damage from the coronavirus that emerged in China in December. Anti-disease controls that shut down Chinese factories are spreading as the United States and European countries close schools, cancel public events and impose travel controls.

Anxiety mounted after Italy, the hardest hit place in Europe, said travel controls imposed earlier on its north would be extended nationwide. Ireland canceled St. Patrick’s Day parades and Israel ordered visitors quarantined ahead of Passover and Easter, one of the busiest travel periods of the year.

The mounting losses and a flight by investors into the safe haven of bonds have fueled warnings the global economy, which already was showing signs of cooling, might be headed into a recession.

The drop in U.S. stock prices was so sharp that it triggered Wall Street’s first trading halt in more than two decades. But Trump’s comment that he will seek relief for workers as ripple effects of the outbreak spread gave some investors an excuse to resume buying.

“This is not like the financial crisis where we don’t know the end is in sight,” said Treasury Secretary Steven Mnuchin. “This is about providing proper tools and liquidity to get through the next few months.”

Benchmark U.S. crude jumped 8.5%, or $2.65, to $33.78 per barrel in electronic trading on the New York Mercantile Exchange. It lost 25% on March 9 after Saudi Arabia and Russia engaged in a price war in the oil market. The Saudis confirmed March 10 that they will increase production to record levels.

Stock markets usually welcome lower energy costs for consumers and businesses. But the decline cuts into revenue for producers, including the United States. And the abrupt drop, coming amid virus fears, rattled investors.

While the virus outbreak is easing in China, where the virus was first detected, fast-growing clusters have turned up in South Korea, Japan, Iran and Italy, and the caseload is growing in the United States.

The S&P dropped 7.4% in the first few minutes of trading, triggering an automatic 15-minute marketwide trading halt. That has happened only once before, in 1997.

Central banks in the United States, China and other countries have cut interest rates to try to shore up economic activity. But economists warn that while rate cuts might help to buoy consumer demand, they cannot reopen factories that are closed due to quarantines or lack of workers and raw materials.

“Even coordinated policy responses are not a tried and tested panacea and by no means guarantee the ability to durably pull markets back from the brink of bear territory,” Vishnu Varathan of Mizuho Bank said in a report.

The yield on 10-year U.S. Treasury bonds edged up to 0.69% after falling as low as 0.5% as investors shifted money into safe haven assets. It had never been below 1% until last week.

The yield, or the difference between the market price and what investors will receive if they hold the bond to maturity, is seen as a measure of economic confidence. Investors shift money into bonds if they expect economic growth and stock prices to weaken. That pushes up the bond’s market price and narrows the yield.