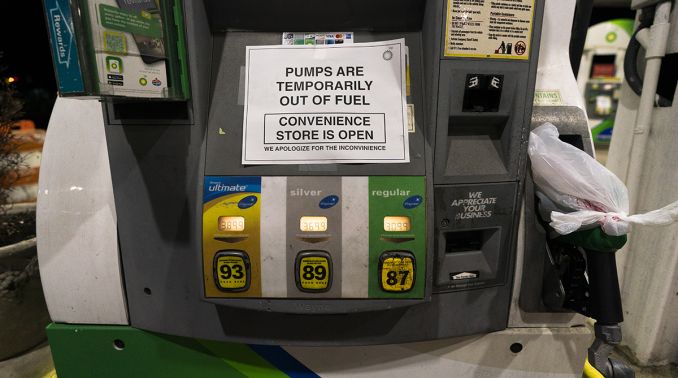 A gas pump at a gas station in Silver Spring, Md., is out of service May 13. (Manuel Balce Ceneta/AP)

Gas shortages at the pumps are spreading from the South to the Mid-Atlantic states, where Virginia and the District of Columbia have become some of the hardest hit areas after a cyberattack that forced a shutdown of the nation’s largest gasoline pipeline.

A gas station owner in Virginia said panic buying is the problem.

Colonial Pipeline can now report that we have restarted our entire pipeline system and that product delivery has commenced to all markets we serve. https://t.co/kpWNw0UQve pic.twitter.com/9r5hA2CLNn — Colonial Pipeline (@Colpipe) May 13, 2021

“It’s like a frenzy,” Barry Rieger, who owns a gas station in Burke, told WJLA-TV.

Georgia-based Colonial Pipeline on May 13 reported making “substantial progress” in resolving the computer hack-induced shutdown. It said operations had restarted and gasoline deliveries were being made in all of its markets. It will take “several days” for things to return to normal, and some areas may experience “intermittent service interruptions during this startup period,” the company said.

At least five North Carolina school systems announced May 13 that they would shift to remote learning as the gasoline supply crisis continued. Among them: Durham, Franklin, Vance and Wake counties, which canceled in-person learning for May 14. The email sent to parents in the Wake County system, the largest in North Carolina, cites “the impact of the gas shortage on staffing availability and student transportation.”

Businesses also were feeling the sting.

At Dixie Speedway in Woodstock, Ga., all the maintenance and safety vehicles have to be filled up before stock car racing the next two Saturdays, but “all the gas stations close to us — within a mile of us — are out of gas,” said Mia Green, the track’s general manager. She has heard of at least a couple of racetracks in the region that canceled upcoming races this weekend because race crews might not be able to get there due to gas shortages.

A cyberattack by hackers who lock up computer systems and demand a ransom to release them hit the pipeline May 7. The hackers didn’t take control of the pipeline’s operations, but Colonial shut it down to contain the damage.

President Joe Biden said U.S. officials do not believe the Russian government was involved in the hack. But he added, “We do have strong reason to believe that the criminals who did the attack are living in Russia. That’s where it came from.”

My Administration has mobilized a whole-of-government response to get more fuel quickly and safely to where it is needed and to limit the pain being felt by American consumers. — President Biden (@POTUS) May 13, 2021

The Colonial Pipeline stretches from Texas to New Jersey and delivers about 45% of the gasoline consumed on the East Coast.

“We are not out of the woods yet, but the trees are thinning out,” said Richard Joswick, global head of oil analytics at S&P Global Platts.

Gas stations should be back to normal next week if the pipeline restart goes as planned and consumers are convinced they no longer need to panic-buy fuel, Joswick said. Full recovery would take several more weeks, he estimated.