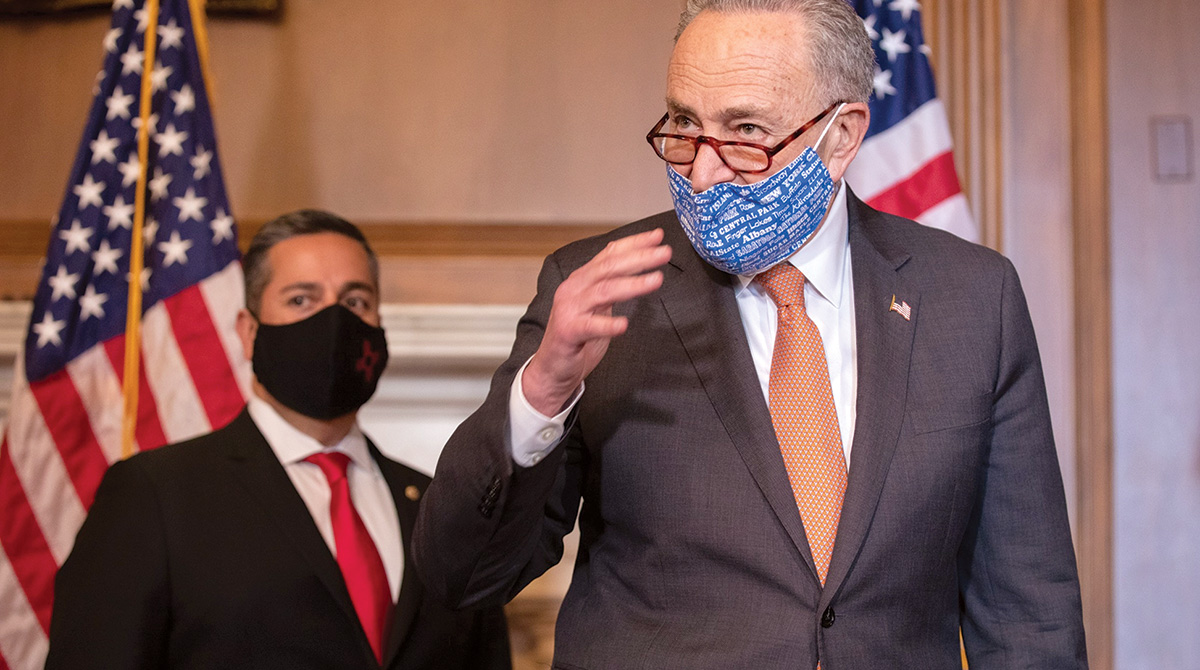 WASHINGTON — Policy updates and funding related to federal freight programs are being considered as part of a multitrillion dollar infrastructure bill U.S. Senate leaders plan to weigh next week.

With support from President Joe Biden, Senate Majority Leader Chuck Schumer (D-N.Y.) signaled the potential for kicking off consideration of a $1.2 trillion bipartisan infrastructure policy package. Alongside the infrastructure package’s consideration, Schumer and his leadership team also intend to begin the floor debate on a $3.5 trillion budget plan that prioritizes climate change and tax policy changes.

The infrastructure bill and the budget-centric policy package are pillars of Biden’s “Build Back Better” agenda dedicated to modernizing infrastructure and social programs around the country. Key to the White House’s modernization effort is an emphasis on enhancing connectivity along freight corridors and boosting severe-weather resilience.

“We’re going to get something done. And that’s why I think that my ‘Build Back Better’ agenda is all about not just building back, but build back better than what we inherited,” Biden said July 14 at a meeting with state and local officials at the White House. “Mayors and governors, you know how to get this done and what we have to do. It’s time to stop talking about it and time to get you the resources.”

Senior congressional staffers and transportation policy observers told Transport Topics a five-year, $78 billion measure updating freight, trucking and rail safety programs that was approved by the Commerce Committee in June is among legislation high on the list of priorities expected to be included in the bipartisan infrastructure package.

Schumer and top Democrats in his caucus, as well as Democratic leaders in the House point to a need to improve freight networks. Under Senate rules, a budget bill could advance with a simple majority via an arcane process referred to as reconciliation. An infrastructure policy bill would require greater bipartisan support in the Senate to overcome debate filibuster rules. Congress is expected to halt legislative action during the August recess.

“If we pass this, this is the most profound change to help American families in generations,” said Schumer July 13.

“The Senate budget will contain many of House Democrats’ top priorities, including transformative action on the investments needed to confront the climate crisis, to transform the care economy, and to expand access to health care,” Speaker Nancy Pelosi (D-Calif.) added.

Senate Republican leaders, however, expressed opposition to Biden and the Democrats’ policy agenda. They have criticized funding for proposals outside traditional infrastructure systems, such as climate change and social care and health programs.

“Our colleagues need to take this summer and think very carefully about what they’re discussing. It would be hard to imagine a proposal less suited to the conditions our country is facing,” said Senate Minority Leader Mitch McConnell (R-Ky.), calling on lawmakers to pause and evaluate a legislative trajectory that would consist of nearly $5 trillion. “Americans cannot afford another socialist borrowing, taxing and spending spree that will kill jobs and raise costs for working families.”

As part of the Commerce Committee’s highway policy bill that is now before the Senate, the Federal Motor Carrier Safety Administration would receive $4.6 billion for commercial vehicle programs associated with safety, human trafficking and law enforcement training. The Commerce Committee bill also would approve an average of $1.2 billion per year for the Infrastructure for Rebuilding America (INFRA) grants program. And, it would authorize $1.5 billion annually for the U.S. Department of Transportation’s infrastructure grant program, while dedicating $2 billion annually for a new program meant for transportation projects of national significance.

The bill also would establish an apprenticeship program designed to pave the way for commercial driver license holders under 21 to operate commercial motor vehicles in interstate commerce. As demand for freight continues to grow, congressional policymakers acknowledge a need to ameliorate traffic bottlenecks and sign off on efforts that promote transportation programs.

“This important bipartisan legislation makes a $78 billion down payment on rebuilding and revamping our nation’s critical infrastructure, a key to our economic future and creating jobs,” said Commerce Committee Chairwoman Maria Cantwell (D-Wash.). “Together, this committee succeeded in passing legislation that makes infrastructure investment that we need to be competitive in a global marketplace.”

House transportation leaders recently passed a multiyear highway policy bill that aims to enhance the mobility of freight nationwide. According to the U.S. Department of Transportation’s Bureau of Transportation Statistics, the Freight Transportation Services Index rose 0.1% in May from the previous month, an increase for the third consecutive month.