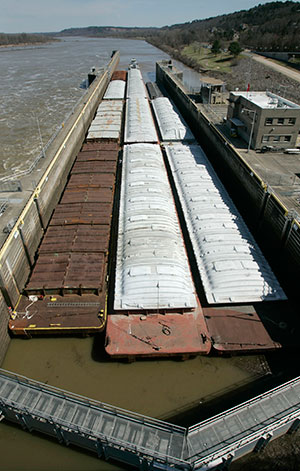 Five Rivers had requested the bulk storage for several years because of loss of business at the Port of Fort Smith to other ports. Site work for the 30,000-square-foot bulk storage building project began in 2017 with funds from the same grant program, which was awarded in 2016.

The program for public ports is funded by the ad valorem tax paid by industries on the value of the barges utilizing Arkansas’ navigable waterways, the commission states.

• White River Regional Port Authority to advance with Phase II of a three-phase process to construct access to the port site.

“This grant program increases Arkansas’ competitive advantage on the nation’s inland river system to entice increased waterborne commerce for the navigable rivers in Arkansas,” said Deidre Smith, director of the Arkansas Waterways Commission. “The waterways are an economic driver for the state, and water transportation is the most cost-effective, safe and environmentally friendly mode of shipping bulk and oversized cargo.”

The grant was established by Act 1483 of the 89th General Assembly. A copy of the grant rules and application can be obtained in the news section of the commission’s website at waterways.arkansas.gov.

The Arkansas Waterways Commission is the sole state agency responsible for developing, promoting and protecting waterborne transportation in Arkansas. The commission also promotes economic development for ports on the five commercially navigable rivers of the state: the Arkansas, Mississippi, Ouachita, Red and White rivers.