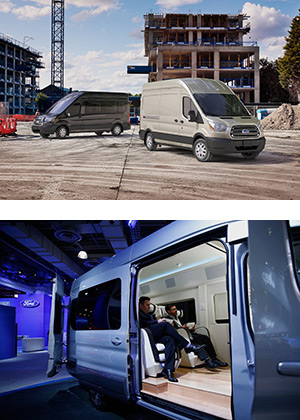 Ford sold more vans last month than it has in any April in almost 30 years, and U.S. van sales by unit have more than doubled in the past five years, according to data from Edmunds.com.

In the first quarter of this year, the segment’s sales shot up by another third. If that pace holds, Americans will buy about 475,000 vans this year.

Driving that demand is good old-fashioned commerce:  Web shoppers clicking for package deliveries, business travelers zipping from airports to hotels, and a resurgent housing sector full of electricians, carpenters, and other skilled workers hauling the tools of their trade from one busy job site to another.

The Silver Moon Brewery in Bend, Oregon, uses Fiat-Chrysler's new Ram ProMaster to ferry the kegs around. The vehicle even has a few taps on the outside, doubling as a bar on wheels. The cast of the History Channel's American Pickers zips from one junkyard to another in a new Ford Transit. If spending is the lifeblood of an economy, vans are the veins.

Indeed, an index of small-business optimism, compiled by the National Federation of Independent Business, mirrors van sales in recent years.

"We knew that as the industry bounced back, this segment would be on the forefront," said John Schwegman, director of commercial products at General Motors Co. Recently, the company's Chevrolet brand has won major orders from AT&T, U-Haul, and DirecTV, to name a few. In response, it added a third shift at the Wentzville factory, where some 3,500 workers stamp out vans just west of St. Louis. "Right now, we’re selling everything that we can build," Schwegman said.

In addition to the economic recovery, vans are just a lot better than they used to be. The old formula was simple and crude: Take the chassis and engine of a pickup and bolt a big box on top. Daimler changed the game in 2001 when it started selling its Sprinter van in the United States. The Sprinter was efficient. More important, it was tall. An electrician could walk upright down an aisle of shelves. A hotel-bound traveler no longer had to hunch and waddle to a seat like a reluctant spelunker.

Nearly every van these days has a hint of the Sprinter in it. The new van from Ram is a direct descendant of the Mercedes, since Chrysler and Daimler were in business together.

But the offering that is running away with the segment lately comes from Ford, which decided a few years ago to stop selling its midsize pickup truck in the United States and start making vans here that it has long hawked abroad.

Ford’s Transit comes in three different lengths and heights. With a number of different engines, there are 58 Transit configurations. "The big trend that we’ve seen is customers being able to right-size their vehicle for the job that they need," said Yaro Hetman, brand manager for the Transit. "We had a show where we had the Mustang GT500 and the conversion van, and the van actually drew as much attention.”

Bloomberg Intelligence analyst Kevin Tynan said recent van sales are particularly impressive because increases have come despite a surge in giant SUV offerings. Driving that demand is the sense that vans are no longer boxes on wheels for hauling grade-schoolers on field trips and schlepping old appliances to the dump. Tynan said there's a booming industry in "upfitting" vans as luxury shuttles.

Ford now markets a version of its Transit as "a private jet on wheels." It comes with a built-in bar, a 52-inch retractable movie screen, and interior lights that can be controlled with a smartphone.

Forget the Maybach and the Chevy Suburban, Tynan said. “If I was the CEO of a company, I’d be in a converted Sprinter."