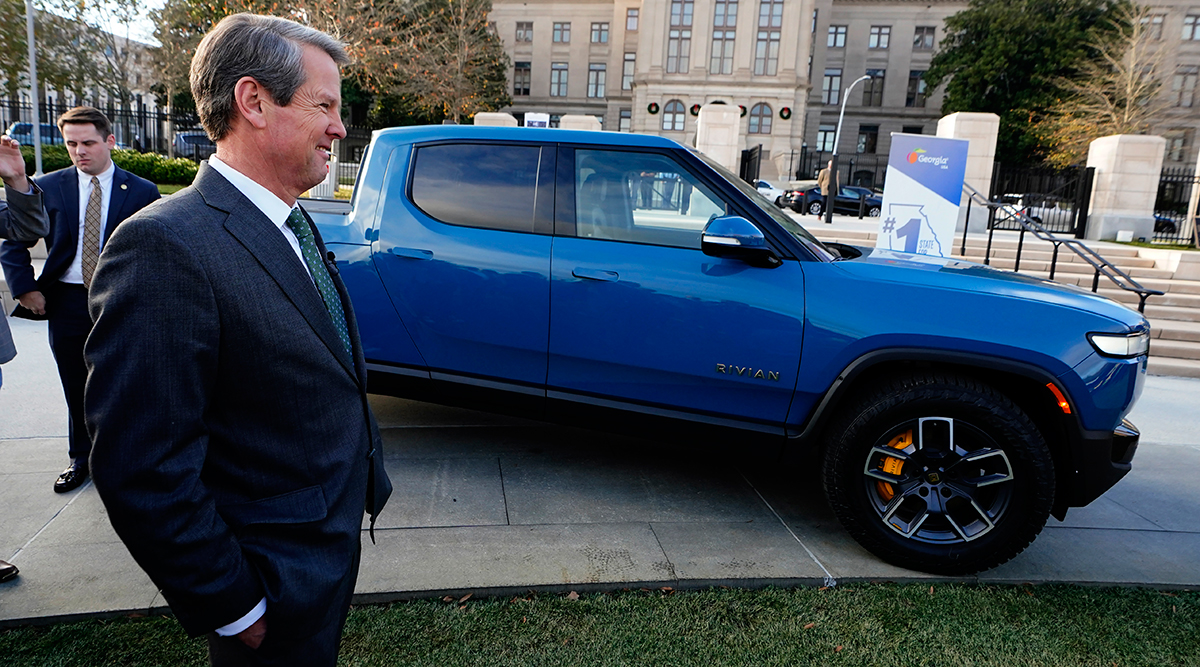 Gov. Brian Kemp stands next to a Rivian electric truck on Dec. 16, 2021 while announcing the company's plans to build a $5 billion plant east of Atlanta projected to employ 7,500 workers. (John Bazemore/Associated Press)

MONROE, Ga. — Opponents trying to derail a $5 billion, 7,500-job Rivian electric truck plant in Georgia dominated a state meeting April 18 that was meant to gather suggestions on how to design the plant to mitigate any impact on the environment.

The state assumed oversight over the Rivian Automotive project after opponents overwhelmed Morgan County planning and zoning officials. The plant was announced by the company and Georgia Gov. Brian Kemp in December, and is the biggest single industrial project in state history. The first meeting of one of the oversight committees was April 18 in the city of Monroe.

The Irvine, Calif.-based electric vehicle manufacturer announced last year that it would build the facility on a 2,000-acre site in Morgan and Walton counties about 45 miles east of Atlanta along Interstate 20. It plans to produce up to 400,000 vehicles a year there. Rivian, which also has a plant in Normal, Ill., said it hopes to break ground as early as this summer and begin production in 2024.

The state panel, led by John Eunice, deputy director for the state Environmental Protection Division, did not get much cooperation from a hostile crowd that gathered at Athens Technical College in Monroe, news outlets reported. Opposition to the plant has been heavy from Rutledge-area residents who say the plant will spoil their rural quality of life.

Residents criticized the meeting as a sham, saying it’s impossible to make meaningful suggestions when there’s not yet a plant design and saying the state is only working to get the plant built.

“I was sitting at home and I saw my governor get on TV and say Rivian, 2,000-acre plant, coming to Rutledge, Georgia and it’s a done deal,” said Pam Jones.

Many speakers April 18 voiced concerns about possible well-water contamination, light pollution and the disruption of wildlife habitats and farmland for heavy industry.

A Rivian executive was present via video conference but did not speak during the hearing.

A spokesperson for Rivian said the meeting was a valuable opportunity for the company to gather input and that the company is committed to sharing details of their plans for the site once they are complete and “meet our own high design and environmental standards.”

The plant is a subject of contention in Georgia’s Republican primary for governor, with former U.S. Sen. David Perdue attacking Kemp for agreeing to the Rivian location without support from neighbors.

Eunice said he does not know when Rivian will file for environmental permits needed to build the facility. He said the division will take public comment on the permits. The meeting was the first of four planned for the site design and environmental committee. The state plans four meetings each with three other committees tasked with examining quality of life, workforce and local business engagement issues.