Expect 2018 to Be a Year of Technological Innovation, Deputy Administrator Says

WASHINGTON — A top federal regulatory official for trucking said her agency’s priorities this year will include a special emphasis on encouraging technological innovation in the commercial motor vehicle industry.

“I have witnessed the evolution of the industry from economic to safety regulation over the last 32 years,” Federal Motor Carrier Safety Administration Deputy Administrator Cathy Gautreaux said Jan. 9 during an update of the agency’s activities and priorities at Transportation Research Board’s annual conference. “We are on the cusp of revolutionary changes in the way we move both people and freight.”

“All too often progress is hampered, not by a lack of will or lack of resources, but by the many regulatory hurdles that must be cleared,” Gautreaux said. “The private sector is ready and eager to invest in infrastructure, experiment with advanced technologies, and grow their businesses in the process. But regulatory or permitting barriers can delay projects without providing concrete benefits to safety, the environment, or other concerns.”

Also, agency officials will be developing a new data model to improve the way the agency rates the safety culture of the more than 500,000 active motor carriers. 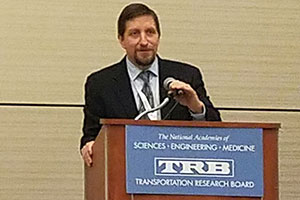 Joe DeLorenzo, director of FMCSA’s Office of Compliance and Enforcement, said at the session that the agency will soon send a report to Congress outlining the corrective actions it will take in response to a Compliance, Safety, Accountability program study conducted by an elite academic panel of the National Academies of Sciences.

“The National Academies’ real recommendation was that we take a step back, redo your analysis, and then see what that tells you about how to handle safety management going forward,” DeLorenzo said. “We’re not trying to predict crashes, but we are trying to identify those behaviors that carriers engage in that do lead to crashes.”

That statistical model the panel recommended is known as the Item Response Theory, which provides the basis to access a motor carrier’s “safety culture,” DeLorenzo said.

FMCSA was urged to develop an IRT model over the next two years, to improve federal crash data and also consider other sources of data. A report on the agency’s progress was due to Congress last month, but it is taking longer than anticipated.

However, DeLorenzo said a sample run of speeding violations using the IRT model already has shown that using expert opinions, rather than data, on how to weigh violations for speeding was not always accurate.