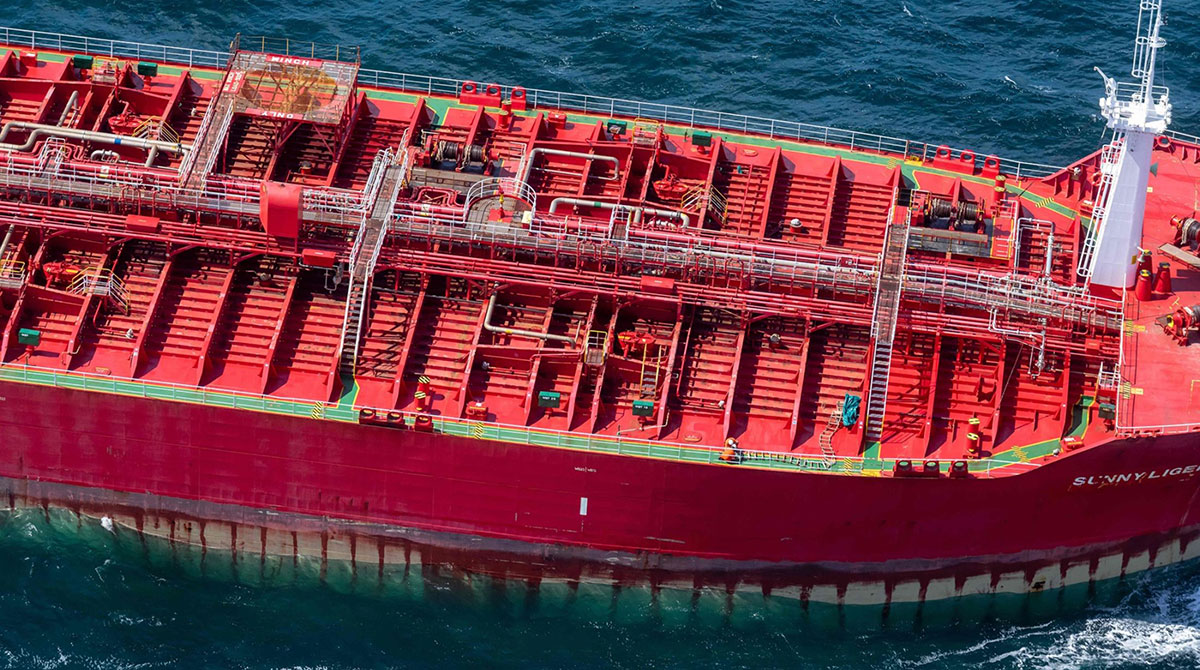 The Sunny Liger, a Marshall Islands-flagged tanker with a consignment of Russian diesel, anchored in the North Sea, near IJmuide. (Paul Martens/AFP/Getty Images)

A fleet of ships carrying diesel, one of the world’s most important fuels, is heading for European markets facing energy-security threats from high temperatures, soaring gas prices and Russian disruption.

Five ships transporting close to 3 million barrels are poised to move from Asia to Europe so far in August, preliminary data from Vortexa shows. That’s the most in five months on a barrel-per-day basis. Shipments from the Middle East to Europe are also set to expand.

The rising flows of diesel — used in industries, transport and for power — toward Europe are a result of market dislocations caused by higher prices at the hub of Amsterdam, Rotterdam and Antwerp (ARA) relative to Asia, said traders. China’s sputtering economy and a seasonal demand lull in India also contributed to Asia’s oversupply, they added.

Europe has been struggling with a historic drought that’s causing a plunge in water levels on the Rhine River. The waterway that links oil tanks in the ARA hub to consumers in inland Europe is currently impassable to most barges, creating a supply bottleneck that could prompt draw-downs in their stockpiles that will need to be replenished ahead of winter.

Countries including Sweden and Germany have warned of rising oil consumption in a bid to replace pricey gas, while the region has been purchasing more coal from across the world. It’s still unclear, however, just how strongly Europe’s demand will rebound this year-end due to a slowdown in the region’s economy.

Diesel that will load from India and North Asia in August takes close to a month to reach Europe, arriving at its destination just as summer comes to an end. Some of the vessels on the so-called arbitrage route to Europe include larger vessels such as Suezmaxes that can carry up to 1 million barrels of oil.

“Traders are taking opportunity of the economies of scale to make the East-West arbitrage workable by loading their cargoes onto these larger tankers,” said Serena Huang, lead Asia analyst for Vortexa.

Gas-to-oil switching is forecast to surge this year, with the International Energy Agency boosting its forecast for global oil demand growth by 380,000 barrels daily on the expectation that industry and power generators will switch fuels. The extra demand that prompted the revision is “overwhelmingly concentrated” in the Middle East and Europe, the agency said. Its bullish view was echoed by Goldman Sachs Group Inc.

Additionally, the risk of Russian gas-supply disruptions and concerns over energy security are set to encourage more diesel stockpiling. Europe’s benchmark for gas has nearly tripled this year, soaring way beyond the 18% climb in oil prices during the same period.

Meanwhile, Asian refineries are expected to churn out 215,000 barrels a day more diesel than the region requires, while supplies from the Middle East also rise, according to JY Lim, an analyst at S&P Global Commodity Insights.

New refinery capacity in the Middle East “mean a change in the east of Suez gasoil supply/demand balance, meaning that the structural arbitrage may be open more often and for longer,” said Kevin Wright, an analyst at Kpler. Diesel flows from Asia to Europe are likely to rise during the rest of the third quarter, he said.

— With assistance from Jack Wittels and Jake Lloyd-Smith.