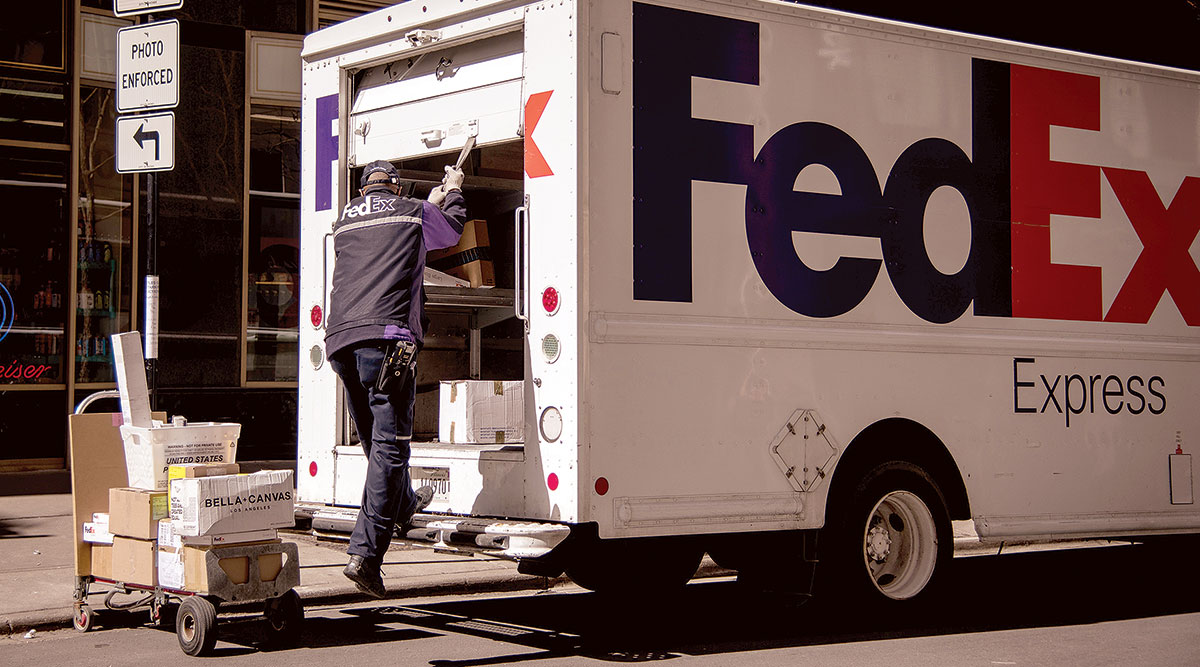 In the fiscal fourth quarter ended May 31, FedEx generated $1 billion in net income, or $3.75 per share, compared with a $70 million loss, or 26 cents, in the same period a year ago. However, the results from 2016 included a mark-to-market pension adjustment and a tax impact related to the company’s TNT Express purchase in May 2016.

FedEx, which ranks No 2 on the Transport Topics Top 100 list of the largest U.S. and Canadian for-hire carriers, came out 4 cents ahead of the analysts’ consensus estimate and 3 cents for the full year as surveyed by Bloomberg News.

Chief Financial Officer Alan Graf said, “The improvement in operating results was driven by higher base rates, increased package volume and the inclusion of TNT’s results.”

Tax benefits from the implementation of new foreign currency tax regulations and the adoption of a new accounting standard for share-based payments also benefited results, the company said.

• FedEx Express revenue rose 7% to $7.2 billion due to a 5% increase in international exports and higher prices, the company announced. Operating income (the amount after expenses are deducted), jumped 14% to $863 million for the quarter. The yield per package, excluding fuel surcharges, went up 4% and U.S. volume grew 0.3% year-over-year during the quarter.

For the fiscal year, operating income rose 6% to $2.7 billion at FedEx Express.

• FedEx Ground revenue increased 9% to $4.7 billion in the fiscal fourth quarter compared with a year ago and operating income grew 7% to $702 million. Average daily package volume rose 3% and yield per package, excluding fuel surcharges, increased 6% in the quarter.

For the fiscal year, operating income rose 1% to $2.3 billion at FedEx Ground.

• FedEx Freight revenue was up 6% to $1.7 billion, but operating income falling 3% to $133 million. Average daily shipments were flat compared with a year ago.

For the fiscal year, operating income fell 7% to $397 million at FedEx Freight.

“Year-over-year, Freight’s yield growth has improved sequentially as Freight continues to work toward a better balance of volume, pricing, and capacity. Operating results were slightly lower due to higher salaries and wages and increased information technology expenses that offset the benefit from the higher base rates,” Graf said.

Less-than-truckload daily shipments per day grew 3% for the full fiscal year to 101.6 million, but remained unchanged in the fourth quarter at 102.7 million. For the fiscal year, revenue grew 1% per shipment and 3% per 100 pounds of freight. In the final quarter, the both revenue metrics grew 6%.

The TNT Express division generated $1.9 billion in revenue and $26 million in operating income in the fourth quarter.

Capital expenditures in the past 12 months were $5.1 billion, but the company expects to raise the figure to $5.9 billion in the 2018 fiscal year.

The carrier took possession of a Boeing 777 in 2016 that provides Asia to United States overnight service through its Memphis hub. It also moved up the timeline on two aircraft purchases and executives told industry analysts that they’re in talks with Boeing about future opportunities. It will also continue to invest in automation and expansion in the Ground operation.

FedEx said it is unable to forecast pension accounting adjustments for fiscal 2018. But before the adjustments earnings are projected to be $12.45 to $13.25 a share for the year.